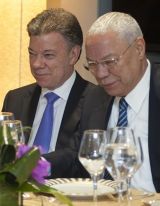 In his second official US visit, President Santos joined the group of nearly forty policy, business, and civil society leaders at the new Atlantic Council headquarters for an off-the-record working dinner on how the transatlantic community can support Colombia’s extraordinary transformation.

“We are pleased to host President Santos at this moment of remarkable dynamism in Colombia and across Latin America,” said Atlantic Council President Frederick Kempe. “Colombia’s positive evolution, both politically and economically, has been impressive. We are proud to share this moment with the visionary leader behind much of this transformation.”

The Colombian government is in the midst of negotiating an end to the fifty-year conflict with the Fuerzas Armadas Revolucionarias de Colombia (FARC), while the country is witnessing an impressive moment of economic development and is on track to become a member of the OECD. Additionally, US-Colombia trade has increased 20 percent since the signing of the bilateral free trade agreement, and an EU-Colombia trade agreement took effect this past August.

“Colombia is at a positive pivotal moment of economic development and political reconciliation. Its second largest city, Medellín, symbolizes the dramatic transitions taking place,” said Peter Schechter, director of the Adrienne Arsht Latin America Center. “Twenty years ago, this city was called the murder capital of the world. A decade and a half later, Medellín won the Wall Street Journal’s 2012 award for ‘Most Innovative City in the World,’ beating out Tel Aviv and Sydney.”

The Arsht Center, founded this year with a $5 million gift from business leader and philanthropist Adrienne Arsht, is dedicated to broadening awareness of the transformational political, economic, and social changes throughout Latin America. As one of ten regional and thematic centers of the Atlantic Council, it draws on the organization’s more than fifty-year history in setting the transatlantic agenda.

To schedule interviews with Arsht Center experts, or to learn more about this dinner, please contact us at  [email protected].