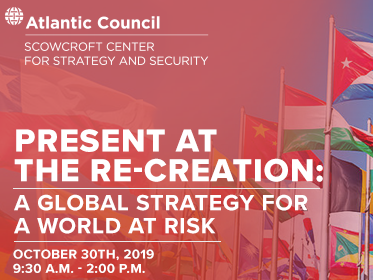 How can the rules-based international system be re-created for the 21st century? Can and should the US re-build a liberal, rules-based international system? What goals should the US, and its allies, pursue in a changed world, where emerging risks and enduring challenges persist? Those were some of the key questions which animated the event Present at the Re-Creation: A Global Strategy for a World at Risk, which took place on October 30, 2019.

The event served as a launch for two major Atlantic Council Global Strategy Papers: Global Risks 2035: Decline or New Renaissance? by Mathew Burrows, Director of the Foresight, Strategy and Risks Initiative, and Present at the Re-Creation: A Global Strategy for Revitalizing, Adapting and Defending the Rules-Based International Order, by Matthew Kroenig, Deputy Director of the Scowcroft Center, and Ash Jain, Senior Fellow. The reports drew excellent media coverage: the Global Risks paper received exclusive coverage by Axios and was used as a lead in Mike Allen’s Axios AM newsletter; the Global Strategy paper was included in Politico’s Morning Defense newsletter.

The event had excellent attendance and brought together exceptional speakers, in three panels exploring different facets of the rules-based international system. The day was kicked off with a conversation about the future of the rules-based international system by former Secretary of State Madeleine Albright and former National Security Advisor Steve Hadley, in a conversation moderated by David Ignatius from the Washington Post. The next session, bringing together Mathew Burrows, Esther Brimmer of NAFSA, and Edward Luce from the Financial Times explored the main challenges and risks shaping the world in the next decades. The day ended with a three-way debate about whether the US and its allies can and should re-build the rules-based international system, featuring Matthew Kroenig, Ash Jain, facing off against Heather Hurlburt of New America and Emma Ashford of the Cato Institute, strategically moderated by Nick Schifrin from PBS NewsHour. fuln, I think, in Washington DC we close ourselves in echo chambers, so this three-way debate between Dr. Matthew Kroenig and Mr. Ash Jain from the Atlantic Council, seeks to break down those walls and challenge our assumptions, for defining a sharp strategy.