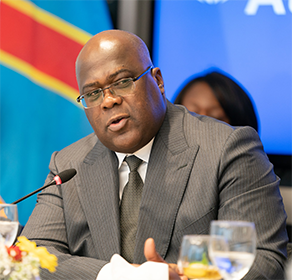 On April 4, the Africa Center hosted H.E. Félix Tshisekedi Tshilombo, president of the Democratic Republic of the Congo (DRC), during his first official visit to the United States.

For an audience of senior US policy makers and non-profit representatives, President Tshisekedi discussed his country’s relationship with the United States. In particular, he hoped to form a strategic partnership with the United States that would promote peace and security, the rule of law, and economic development in the DRC. He also sought US assistance to fight the emerging threat posed by ISIS in his country. Participants had the opportunity to engage the new president on the conditions of his election and his ability to enact his ambitious reform agenda.