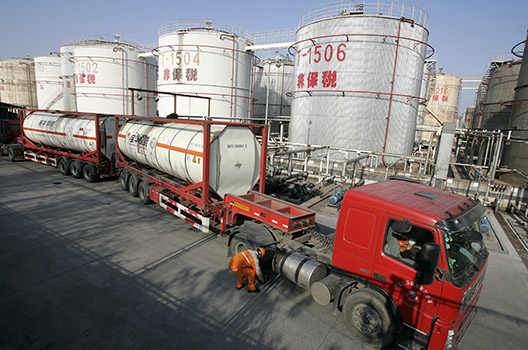 A man works beside gasoline tanks on the outskirts of Shanghai December 5, 2007. China will require its oil firms to build their own reserves to supplement a government-owned strategic inventory, according to a first draft of the country's landmark energy law. REUTERS/Aly Song (CHINA)

Since 2000, the United States has taken steps toward developing strategic stocks of emergency oil product reserves to safeguard supply from international crises and local events such as natural disasters. In recent decades, many International Energy Agency member states, including the United States, have emphasized product stockholding to facilitate rapid local emergency supply distribution. In his report, Strategic oil product stockholding: International experience and American prospects, Global Energy Center Senior Fellow Phillip Cornell provides in-depth analysis of the US case and identifies strategic product stockholding practices of countries around the world, from the Netherlands to India and China.

Reviewing existing oil product stockholding regimes worldwide, this report concludes that a decentralized and incremental implementation of strategic product reserves can allow the United States to address risks associated with oil product storage and delivery given the state of domestic infrastructure. Based on his analysis, Cornell makes several recommendations for US policy toward oil security, focusing on issues related to regional analysis, government-owned stocks, and release authority. Offering international perspective that can shape the way the United States approaches impending oil consumption changes, this report puts forth a roadmap for the country to strengthen its domestic energy security policy.