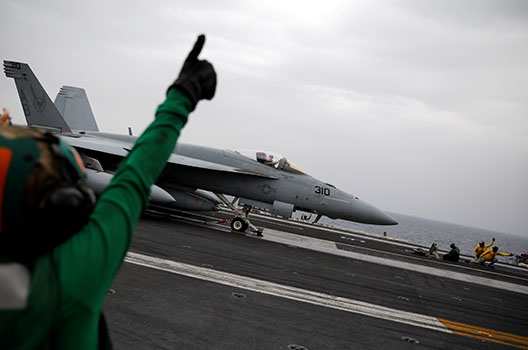 U.S. Navy flight deck personnel use hand signals as an F/A-18 fighter jet prepares to take off from the USS Harry S. Truman aircraft carrier in the eastern Mediterranean Sea, May 4, 2018. Picture taken May 4, 2018. REUTERS/Alkis Konstantinidis

In US law, the National Technology and Industrial Base (NTIB) comprises the industrial bases of the United States and three of its closest historical allies, Australia, Canada, and the United Kingdom. Canada was included when the original NTIB was established in 1994, and its scope was expanded in 2016 to include Australia and the United Kingdom. That recent expansion has corresponded with a changing threat and technology environment, in which the leading sources of industrial innovation reside outside the defense sector and, increasingly, beyond the US and its Western allies. This new threat and technology environment will require a different a type of NTIB to support future defense-industrial planning and execution. The purpose of this new Atlantic Council report by William Greenwalt is to promote urgent deliberations over what a modern NTIB should look like, and to encourage Congress and the administration to adopt measures that will enable access to defense-industrial resources that are more responsive to the needs of the National Defense Strategy.