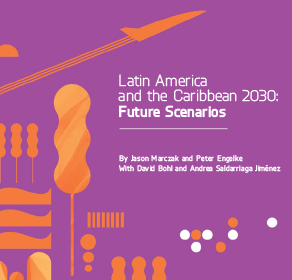 A new Atlantic Council–Inter-American Development Bank (IDB) report lays out six scenarios for Latin America and the Caribbean in 2030, underscoring how greater integration and better governance hold the key to greater prosperity.

The report finds that if the region and world move ahead as expected, 57 million more Latin Americans and Caribbean citizens will join the middle class over the fourteen-year period. Annual regional GDP growth will be 2.4 percent, slightly outperforming the US rate of 2.2 percent. But the region will face significant challenges ranging from income inequality to its demography and the impact of climate change.


If approached correctly, global and regional trends—and uncertainties—can be a boon for the region instead of a burden. A region that embraces better governance could see large reductions in homicides and less tax evasion, while greater integration could help the transition to a higher-value-added economy. But fragmentation or an erosion of governance could result in more crime, low productivity, and difficulties in attracting foreign investment.

Latin America and the Caribbean 2030: Future Scenarios, written by Jason Marczak of the Atlantic Council’s Adrienne Arsht Latin America Center and Peter Engelke of the Council’s Strategic Foresight Initiative, outlines several alternative scenarios as to how the region could unfold.

1. “Muddling Through,” the base-case scenario, shows what current trends point to: decent economic fortunes and more or less stable democracies. Among its findings: the middle class population increases to 345 million people by 2030.
2. “Governance on the Rise or an Illicit World Afloat” looks at the potential for qualitative jumps in governance on the heels of active citizen engagement and digital revolutions or, alternatively, the potential for corruption scandals, transnational crime, and weakened rule of law. Two key data points: with better governance, the regional economy grows by an additional 7 to 10 percent. But foreign direct investment shrinks by more than 50 percent with a rise in insecurity.
3. “Toward Integration or Fragmentation Prevails” foresees what could happen if countries cooperate in making investments and joint policies in finance, innovation, energy, infrastructure, and education. Another possibility: parts of the region are pulled toward different economic poles, making the region less coherent than ever. If infrastructure investments reach 5 percent of GDP, Central America’s economy grows by over 9 percent. But fragmentation could result in exports declining by $200 billion annually.
4. Climate change has its own set of challenges. Natural disasters, droughts, flooding, and new diseases could be more common, but there is opportunity for the region to become the world’s bread basket and its global green leader. In the 2020s, most glaciers in the Peruvian and Bolivian Andes below 5,000 meters could disappear entirely.

“The future holds great promise but also the risk of great uncertainty for Latin America and the Caribbean. Looking to 2030, middle-class growth, stronger economies, healthier people, and greater security will come only through a call to action today,” says Jason Marczak. Adds Peter Engelke: “The key question will be how the region anticipates and addresses global and regional drivers of change. Latin America will soon be at a decision point in its place regionally but also in the world.”

The publication, produced in collaboration with the Frederick S. Pardee Center for International Futures at the University of Denver, reflects insight from over 110 decision makers representing 15 countries. It provides specific numbers on how the region’s trajectory may unfold—from economic growth to security and health to education.

Latin America and the Caribbean 2030: Future Scenarios includes an introduction by IDB President Luis Alberto Moreno and 17 guest columns by prominent experts such as Marta Lagos, director of Latinobarómetro; Paul Farmer, co-founder of Partners In Health; and Esteban Bullrich, Minister of Education of Argentina.
Read the Publication (PDF)