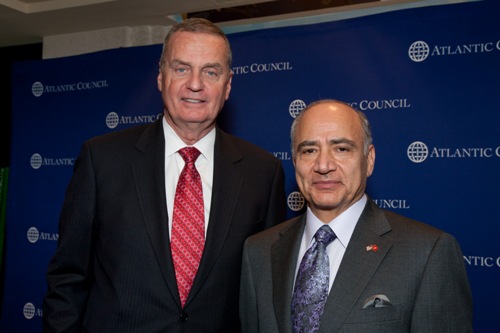 The Atlantic Council’s Michael S. Ansari Africa Center and On The Horizon Project have officially released a landmark report on the rising importance of U.S. national security interests in West Africa’s Gulf of Guinea, entitled: “Advancing U.S., African, and Global Interests: Security and Stability in the West Africa Maritime Domain.”

The Gulf of Guinea is at the brink of becoming a greater supplier of energy to the United States than the Persian Gulf and is therefore of far higher strategic importance than has historically been the case.  The report calls for a high level reset in what is going to become in the near future, a vital region to maintaining U.S. energy security, prosperity, and homeland security.  It does this by setting out in a practical and comprehensive way, how the United States and her partners in Africa and Europe can respond to dire threats in the maritime domain.

The report, written by John Raidt, Director, On The Horizon Project, and Kristen E. Smith, Assistant Director, Michael S. Ansari Africa Center, sounds the alarm on the deep reach of transnational terrorists, drug cartels, and other criminal enterprises in West Africa, and how, abetted by official corruption, these groups need a badly governed, poorly resourced maritime security regime to sustain their enterprises.  It explores the adverse consequences for the U.S., West African countries and the broader International Community of the continued failure to counter, vigorously and proactively, adverse security, economic, and political conditions in the region.

Disturbing trends explored in the report, include:

Key recommendations set forth in the report for the U.S. government, include: