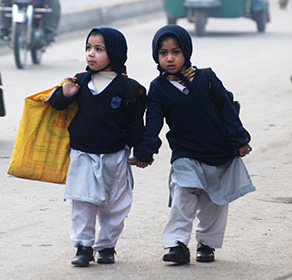 If ever a turning point seemed inevitable in Pakistan’s militia policy, it was in the aftermath of the Peshawar school massacre in December 2014. Tehrik-e-Taliban Pakistan (TTP) killed 152 people, 133 of them children, in the bloodiest terrorist attack in Pakistan’s history. The carnage sparked an unprecedented national dialogue about the costs and contradictions of the Pakistani political and military establishment’s reliance on violent proxies, such as the Afghan Taliban (from which the TTP originates), for security.

Why does Pakistan continue to differentiate between “good” and “bad” militias in the face of the Peshawar massacre? What are the costs of playing the good-bad militia game? What can be done to end Pakistan’s dependency on armed nonstate groups? In “Reimagining Pakistan’s Militia Policy,” Visiting Assistant Professor of Government at Skidmore College and US-Pakistan Program Exchange Fellow at the Atlantic Council’s South Asia Center, argues that Pakistan’s unwillingness to crack down on all terrorist groups is more a product of cold calculation than ideological shortsightedness. Understanding Pakistan’s close relationship with militias requires recognizing the strategic logic through which many states outsource violence.