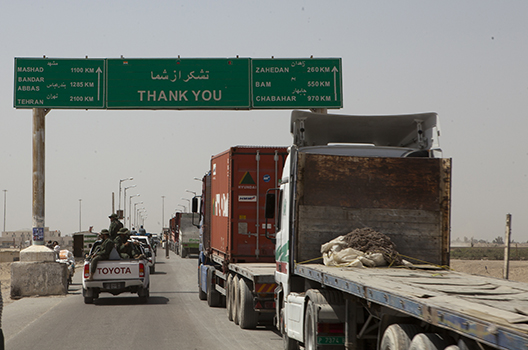 Trucks wait to cross the Afghanistan-Iran border in Zaranj, Afghanistan, May 10, 2011. The crossing is part of a busy trade route between Central Asia and the Middle East. (U.S. Marine Corps photo by Sgt. Mallory S. VanderSchans/Released)

Recent Sino-Indian and Indo-Russian informal agreements to undertake joint projects in Afghanistan mark a geographical paradigm shift in the strategic ambitions of the region’s largest stakeholders. Partnerships in economic and regional connectivity offer the potential to reinvigorate interest in the Afghan peace process and to initiate shifts in regional alignments. But challenges to cooperation remain, including uncertainties regarding US policy in South Asia and Iranian sanctions, the threat of the rivalry between Saudi Arabia and Iran spilling over into the region, the role of Pakistan, and questions regarding the ultimate agenda of the Taliban. Despite these challenges, the opportunity for cooperation between India, China and Russia in the region signals new thinking regarding the Afghan War, and the potential beginning of enhanced cooperation between key stakeholders of an increasingly volatile and unpredictable international system.