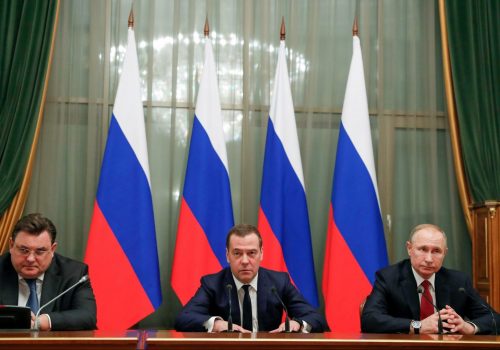 With Putin’s presidential term set to end in 2024 and parliamentary elections to take place in late 2021, Medvedev’s resignation and Putin’s proposed changes come at a time when the Russian president is looking to secure a possibly uncertain political future.

Carpenter speaks to BBC World News on strike against Soleimani

Carpenter quoted in VICE on rising tensions with Iran

Dr. Michael Carpenter is a nonresident senior fellow with the Atlantic Council’s Eurasia Center. He is also senior director of the Biden Center for Diplomacy and Global Engagement at the University of Pennsylvania.

Dr. Carpenter is a former deputy assistant secretary of defense with responsibility for Russia, Ukraine, Eurasia, the Balkans, and Conventional Arms Control. Prior to joining the Department of Defense, Dr. Carpenter served in the White House as a foreign policy adviser to Vice President Joe Biden and as director for Russia at the National Security Council. Previously, he was a career foreign service officer with the State Department, where he worked in a number of different positions, including deputy director of the Office of Russian Affairs, speechwriter to the under secretary of political affairs, and adviser on the South Caucasus. Dr. Carpenter also served abroad in the US Embassies in Poland, Slovenia, and Barbados.

During his career at the State Department Dr. Carpenter received four Superior Honor Awards and three Meritorious Honor Awards. He holds an MA and PhD in political science from the University of California at Berkeley and a BA in international relations from Stanford University. Dr. Carpenter was a Fulbright scholar at the Polish Academy of Sciences and has received fellowships from the American Council of Learned Societies, MacArthur Foundation, and IREX Foundation for his academic research.