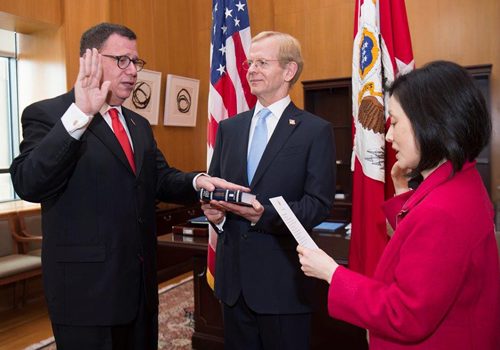 The Other Firing At State And What That Means

The firing of Steve Goldstein, the suddenly former under secretary of state for public diplomacy and public affairs, will have a three-fold negative impact on the United States’ pursuit of its strategic foreign policy interests overseas, in addition to and distinct from the effects of Secretary of State Rex Tillerson’s firing earlier the same day.

Graham Lampa leads the Atlantic Council’s digital communications team and a broader organization-wide digitalization strategy, including as its first phase the creation of this website.

Prior to joining the Atlantic Council, Graham served for nearly a decade as a civil servant with the US Department of State, working at the intersection of foreign policy, innovation, and strategic planning. As a career staffer in the Office of the Under Secretary of Public Diplomacy and Public Affairs, Graham helped lead a years-long, world-wide effort to establish digital engagement with foreign and domestic publics as a strategic capability of US foreign policy.

He also helped inspire organizational creativity within one of the world’s oldest bureaucracies by designing, implementing, and running the “Fund for Innovation in Public Diplomacy”. The fund was active between 2010 and 2015 and empowered staff serving at US embassies and consulates overseas with $15 million in rapidly-deployed seed funding to implement 270 creative outreach programs engaging publics overseas. Many programs that began as projects kickstarted by this fund were later scaled regionally and globally or were adopted and built on by other missions elsewhere in the world.

Graham holds a Master of Public Policy from the University of Minnesota’s Humphrey School of Public Affairs and was a Presidential Management Fellow and Fulbright Fellow.