Energy interconnections: A tool for stability or a vector of geopolitical risk?

The great gas debate: The role of gas in the energy transition 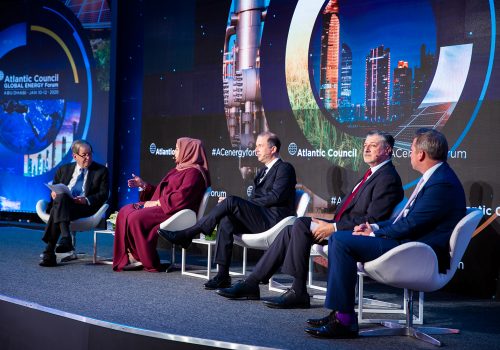 Gas in the energy transition: Bridge or the destination?

“There are some who believe that gas should play no role in the global energy mix,” Ambassador Richard Morningstar, founding chairman of the Atlantic Council’s Global Energy Center, said at the introduction of a panel on the future of gas at the Atlantic Council’s Global Energy Forum hosted in Abu Dhabi, United Arab Emirates on January 12, 2020. At the other end of the spectrum, he added, some have “called gas a destination fuel that provides a clean baseload energy needed for the developed world to grow.”

Adnan Z. Amin is the first Director-General of the International Renewable Energy Agency (IRENA), and was granted the honorary title of Director-General Emeritus by the 2019 IRENA Assembly, at the conclusion of his tenure in recognition of his leadership and outstanding service to the Agency.

Appointed for an initial four-year term in 2011, Mr. Amin was re-appointed unanimously by the Assembly for a second term in 2015. During his tenure, IRENA became the authoritative voice of renewable energy and a leading player in the global energy transition. The Agency’s membership increased three-fold and now accounts for 160 Members and 24 countries in the process of accession, a remarkable achievement in the annals of multilateralism.

Mr. Amin oversaw the development of IRENA’s operations and programmatic work, directing the growth of the Agency’s knowledge framework, country support and regional engagement. At his proposal, the Assembly adopted the promotion of the business case of renewable energy as the Agency’s first strategic priority. IRENA’s efforts played a key role in showcasing the centrality of renewables to powering sustainable economic growth, creating jobs while meeting climate and sustainable development objectives, thus contributing to the adoption of the Paris Agreement and Agenda 2030 in 2015.

Mr. Amin also propelled IRENA on the global stage. Today, the Agency is a regular contributor to, and a sought-after partner for, global and multilateral Organizations such as the United Nations, G7 and G20, as well as international forums such as the Clean Energy Ministerial, the Berlin Energy Transition Dialogue and The Suzhou International Forum on Energy Transitions, among others.

During his tenure, IRENA actively engaged with a wide range of stakeholders, including parliamentarians, the private sector and civil society to create an inclusive global platform for cooperation. At his initiative, the Global Commission on the Geopolitics of Energy Transformation was established in 2018, and delivered in 2019 a groundbreaking report which outlines the implications of a large-scale shift to renewable energy on the global energy system, economies and relations within and between countries.

Before his tenure at IRENA, Mr. Amin enjoined a distinguished career serving the United Nations. He served as Head of the UN System Chief Executives Board for Coordination (CEB) Secretariat, the UN Secretary-General’s policy coordination body comprising the Executive Heads of the UN System. Mr. Amin also led the Secretariat for the UN Secretary-General’s High-level Panel on UN System-wide Coherence, which resulted in an ambitious reform programme implemented under the framework of “One UN” and “Delivering as One”. Mr. Amin was also the Director of the United Nations Environment Programme’s (UNEP) New York Office and Special Representative of the UNEP Executive Director. He has also been a Trustee and Member of the Board of Directors of the Cambridge, UK-based World Conservation Monitoring Centre, considered one of the premier biodiversity information institutions in the world.