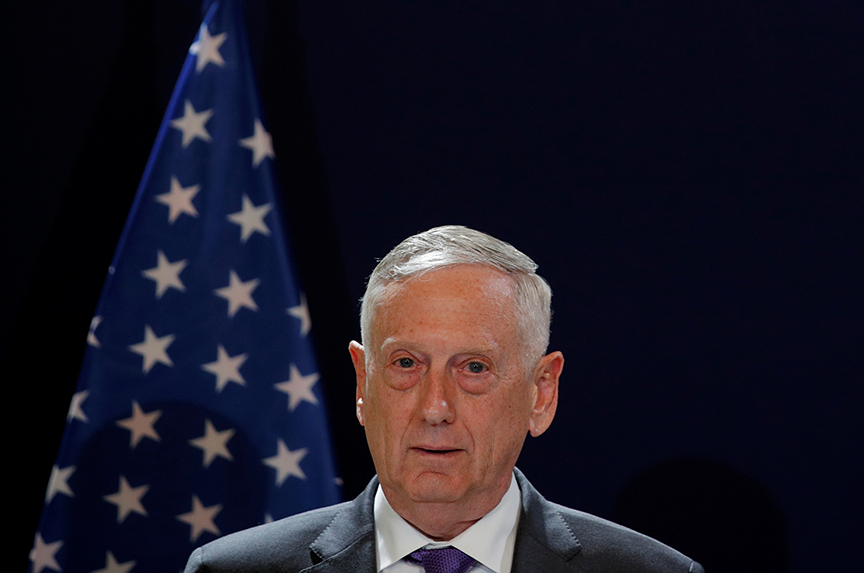 US Secretary of Defense James Mattis attended a news conference at the Defense Ministry in Paris, France, on October 2, 2018. (Reuters/Philippe Wojazer)

The unprecedented nature of Defense Secretary Jim Mattis’ resignation letter to President Trump raises a host of disturbing questions. The most significant of them arise from Secretary Mattis’ suggested differences with his Commander-in-Chief regarding the value of allies — and the dangers of strategic, authoritarian competitors.

Read Mattis’ words closely and they serve to both define and narrow the range of his possible successors to those who better embrace President Trump’s world view. The President will be looking for an individual who will share in his suspicion of allies (who he believes don’t carry sufficient defense burden while enjoying unfair trade benefits), and who will be more willing to work with adversaries, particularly Russia.

“My views on treating allies with respect and also being clear-eyed about both malign actors and strategic competitors are strongly held and informed by over four decades of immersion in these issues,” wrote Secretary Mattis. “Because you have the right to have a Secretary of Defense whose views are better aligned with yours on these and other issues, I believe it is right for me to step down from my position.”

Until recently, Senator Lindsay Graham was considered a front-runner, but this past week he criticized the President’s move on Syria, and called for Congressional hearings on both that withdrawal and the potential troop drawdown in Afghanistan. He has been leading the charge against Saudi Crown Prince Mohammed Bin Salman, again out of step with President Trump.

At the beginning of the Trump administration, Senator Tom Cotton, a military veteran and defense hawk, was considered a leading candidate for either the Pentagon job or CIA director. As a former Army officer who served in Iraq and Afghanistan, he’s got the credentials. However, as a potential presidential candidate with a safe Senate seat, he would likely think twice before entering a besieged administration with two years remaining.

Retired Army four-star General Jack Keane, former Army Vice Chief of Staff who was thought to be valued by Trump, also seems to have withdrawn himself from the field, saying on Thursday that he and Mattis both opposed Trump’s Syria decision – and that he didn’t want the Pentagon post.

One name is mentioned more frequently these days is that of Deputy Defense Secretary Patrick Shanahan, a frequent White House visitor and former Boeing executive who has built a sound relationship with President Trump and Vice President Pence. He pushed hard within the Department of Defense for Trump’s recently announced Space Force, and as more of a business efficiency-expert than a geopolitical or policy architect, he may turn out to be the safe pick.

What’s clear is that, given the unusual nature of his departure, Mattis’ successor is likely to be very different in background and approach to world affairs.

The last time a cabinet official so publicly resigned from a national security position over differences with the President was in 1980. It was then that Cyrus Vance quit the Carter administration as Secretary of State in disagreement with President Jimmy Carter’s ultimately botched effort to rescue US hostages in ran.

What sets Mattis’ resignation apart from that episode is that he doesn’t point to a single event, as Vance did, but rather to a larger philosophical difference. He says nothing at all about the president’s decision to withdraw all 2,000 US troops from Syria, the move that appears to have triggered the resignation.

The most salient message

What historians will cite many years from now in Mattis’ powerful letter is its carefully crafted language that is as much a warning about the future as it is a resignation.

“I believe we must be resolute and unambiguous in our approach to those countries whose strategic interests are increasingly in tension with ours,” he writes. “It is clear that China and Russia, for example, want to shape a world consistent with their authoritarian model – gaining veto authority over other nations’ economic, diplomatic and security decisions – to promote their own interests at the expense of their neighbors, America and our allies.”

He then delivers the most salient message for those of us who consider alliances to be our most valuable of all assets.

Writes Mattis: “We must do everything possible to advance an international order that is most conducive to our security, prosperity, and values, and we are strengthened in this effort by the solidarity of our alliances.”

Nothing is wrong, of course, with making deals with adversaries. Some of America’s greatest presidents, including Ronald Reagan and George H.W. Bush, have written themselves into history by doing just that. Nothing is wrong either with demanding more from allies. Great leaders do so all the time.

Yet, as this calendar year closes, it’s worth remembering that the Trump administration hasn’t yet faced a challenge of the magnitude of the 9-11 attacks or the Afghan and Iraq wars that followed.

The unwritten bottom line of the Mattis manifesto – and the message of the last seventy years of global history – is that such moments require more rather than less attention to allies to address strategic competitors.

It is unlikely that the next two years will pass without an unpleasant security surprise.

Such a challenge will be more difficult to face without the experience and cool head of Secretary of Defense James Mattis.

It will be impossible to address without the support of the allies who served as the primary theme of his departure letter.

Frederick Kempe is a best-selling author, prize-winning journalist and president & CEO of the Atlantic Council, one of the United States’ most influential think tanks on global affairs. He worked at The Wall Street Journal for more than 25 years as a foreign correspondent, assistant managing editor and as the longest-serving editor of the paper’s European edition. His latest book – “Berlin 1961: Kennedy, Khrushchev, and the Most Dangerous Place on Earth” – was a New York Times best-seller and has been published in more than a dozen languages. Follow him on Twitter and subscribe here to Inflection Points, his look each Saturday at the past week’s top stories and trends.