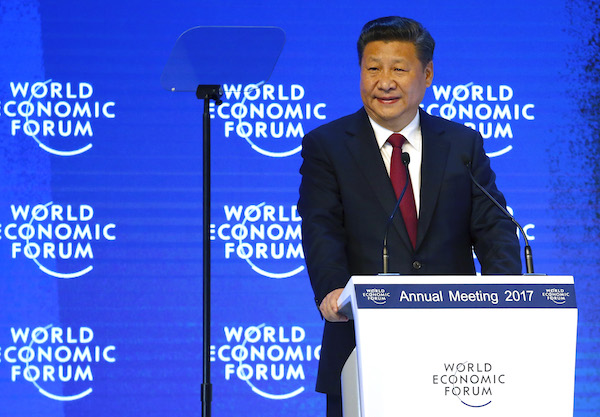 Kishore Mahbubani, the Singaporean author and intellectual, greets me warmly in a conference lounge here and hands me a card promoting the March release of his new book, bearing that provocative question as its title.

The cover blurb announces that he will explain “how, while America became arrogant and distracted, a three-thousand-year-old civilization is well on the way to becoming the number one power in the world.”

The year ahead is likely to provide the most profound trial yet for that thesis and for the durability of China’s rise.

Several new shocks and challenges, ranging from a potential pandemic to slowing growth, will test the resilience of China’s authoritarian leadership and the state-run capitalist system that has provided the country four decades of record growth.

It thus also could mark a significant year for the emerging, generational clash, not of civilizations as Samuel Huntington had argued, but rather of economic and political systems, between democratic and authoritarian capitalism.

The latest blow to China has been the spread of coronavirus from Wuhan, whose geographic centrality and 11-million population make it a Chicago-like crossroads for China and to the world. Add the fact that the outbreak coincided with Chinese New Year travels and celebrations, and you have a nightmare plot that’s still unfolding.

At the same time, China faces several other daunting challenges.

Its society is aging and its economic growth was already slowing to 6% – its lowest level in thirty years – before the expected hit of a percentage point or more from China’s virus response. The phase one trade agreement with the United States will do little to change that, and indeed the bite of still-existing tariffs will continue impacting $112 billion of goods.

January elections in Taiwan and continued demonstrations in Hong Kong have underscored the stubborn fact that educated and prosperous Chinese societies, even if not yet those in the People’s Republic, will continue to demand more freedoms and resist Beijing’s long arm. (That said, the closing of Hong Kong schools over the coronavirus provides a government reprieve).

Meanwhile, richly detailed news reports on China’s repression of its Uighur minority have highlighted the limits of state censorship – while also demonstrating China’s increased use of facial recognition and artificial intelligence technology to track and control potential dissent.

And at the same time, Asian, European and particularly American support and sympathy for China’s rise over past four decades has turned to greater wariness and suspicion. That includes greater international scrutiny, perceived debt traps, and other abuses in China’s Belt and Road development program.

Despite all that, the consensus among delegates in Davos with whom I discussed China’s challenges was that none of them would throw China off its trajectory of becoming the world’s number one power – economically, politically, technologically, and eventually also militarily.

The arguments behind that are that President Xi Jinping has consolidated power over a remarkably capable technocracy, that technological advance has given him greater ability to identify problems and control dissent, that for most Chinese life has been steadily improving and, finally, that the attractions of U.S. and other Western democracies have grown less compelling.

So, the debate here over China’s emergence as the world’s leading power tends to revolve more around pace, process, impact and, of course, U.S. response.

Given the magnitude of the issue, however, there was surprisingly little discussion in Davos on how an increasingly Chinese-influenced global system might differ from – or perhaps even upend – the post-World War II rules-based order of institutions and principles that spawned the World Economic Forum’s creation 50 years ago.

“To a degree still difficult for outsiders to absorb, China is preparing to shape the twenty-first century much as the United States shaped the twentieth,” wrote Evan Osnos in a New Yorker opus this month. “Its government is deciding which features of the global status quo to preserve and which to reject, not only in business, culture and politics but also in such basic values as human rights, free speech and privacy.”

Secretary of State Mike Pompeo put it more bluntly on a recent visit to Europe. “China wants to be the dominant economic and military power of the world,” he said, “spreading its authoritarian model for society and its corrupt practices worldwide.”

One only must reflect on the dramatic changes of the first 50 years of the World Economic Forum to recognize the potential for a similarly dramatic shift in the next half century.

When mostly European and Americans gathered for the first annual meeting of the World Economic Forum in 1971, China was still ruled by Chairman Mao Tse Tung as a largely irrelevant global actor with but 2% of global GDP despite 22% of world population. China’s GDP has grown by more than 14,000% since then, to $14.1 trillion in 2019 from $99.8 billion in 1971. It now has 16.4% of global GDP, compared to the United States’ 23.9%. According to a PwC study, China would have 20% of global GDP by 2050, making it clearly number one, compared to just 12% for the United States, which would fall to the number three position behind India.

A half century ago, the U.S. and Europe together accounted for 65% of global GDP and the international institutions they had created together – the United Nations, the European Community, NATO, the IMF, the World Bank, and others – were young and brimming with ambition.

Though the Soviet Union posed a security threat and an ideological challenge, its communist, state-controlled economic system never produced enough growth or innovation and thus lacked China’s attractiveness as a model.

An Africa businessman in Davos, who asked to remain anonymous, expects China’s influence on his continent, which he believes has already surpassed that of the United States, to expand even more dramatically in the decade ahead behind $1 trillion in new investments.

“The turn toward China will be hard to stop,” he says.

This article originally appeared on CNBC.com

Frederick Kempe is president and chief executive officer of the Atlantic Council. You can follow him on Twitter @FredKempe.

Must-reads from a world in transition

1. THE CLASH OF SYSTEMS

Bipolarity Is Back
Andrew A. Michta / THE AMERICAN INTEREST

Andrew Michta adds richly to my reflections from Davos above on our new “clash of systems” with his must-read in the American Interest.

Writes Michta, “…while Russia’s actions in the global system are comparable to that of a sudden storm, the challenge posed by China is more akin to climate change, insofar as Beijing has the potential to remake the very fundamentals of the international system.”

He hits the nail on the head when he argues that the West is under stress not just because of the strengths of the new autocrats “but also because our elites are increasingly bereft of the ideological conviction that Western heritage and our future are in need of defending, especially now, when the believes of our adversaries are challenging them.” Read More →

Global democracy has another bad year
THE ECONOMIST

The Economist delivers more bad news from the “clash of systems” competition.

The latest edition of the Democracy Index from The Economist Intelligence Unit “finds that democracy has been eroded around the world in the past year.” Assessing the state of democracy across 167 countries across five measures, the global score is the lowest recorded since the index began in 2006.

China scored the sharpest decline, due to lost civil liberties through actions such as digital surveillance and discrimination against Uighurs. The EIU also downgraded the world’s biggest democracy, India. As an afterthought, it saw silver linings in the host of popular protests around the world – but it didn’t seem all that convinced. Read More →

3. THE PLUSES OF IMPEACHMENT?

What does impeachment show the world? America’s stability
David Ignatius / THE WASHINGTON POST

David Ignatius provides a thought-provoking reflection, drawing from history, on why an impeachment process does more to advance American stability in foreign policy than to undermine it.

“Impeachment is an inherently political process for resolving allegations of abuse of power, as the Founders intended,” he writes. “But past evidence suggests that it helps break the fever, rather than making it worse.” Read More →

Chrystia Freeland: ‘We liberals have had a rude awakening’
Edward Luce / FINANCIAL TIMES

One of my favorite regular features is the Weekend FT’s “lunch with” piece, often a mixture of personal insight, culinary whimsy and occasional substance.

This week’s was particularly inviting, given that it was written cleverly by Ed Luce as he dined with his former boss at the FT, who now happens to be Canadian Deputy Prime Minister Chrystia Freeland. (Full disclosure: she was one of my favorite journalistic colleagues, and she now has reinvented herself as a gifted, resourceful and principled public servant.)

One of the richest moments in the piece was when Chrystia refused to be drawn by Ed on recent U.S.-Canadian tensions and President Trump’s personal attacks on her and her Prime Minister. Writes Luce:

“People don’t really comment on the Canada-US relationship because it’s so boring, but it’s a real historical triumph that we can get along with such an asymmetry [of power],” she says. And yet Trump has been very rude about you, I remind her. Doesn’t that complicate your task? Freeland pauses. “Look, the people whose good opinion I rightly seek are Canadians,” she replies. Read More →

The Saudi Connection: Inside the 9/11 Case That Divided the F.B.I.
Tim Golden and Sebastian Rotella / NEW YORK TIMES

Tim Golden of ProPublica and Sebastian Rotella of the New York Times combine efforts to provide unprecedented detail on the lives and movements of Saudi terrorists involved in the 9/11 attacks (working from previously secret documents and 50 interviews with investigators, intelligence officials and witnesses).

Read their investigative report closely and you’ll be left wanting even more, just as do the families of the victims. President Trump, who met with them on September 11 of last year, assured them that still-secret documents would be released. However, Attorney General William Barr then blocked their disclosure on the basis that it would cause “significant harm to the national security.”

“The Encore investigation exposed a bitter rift within the bureau over the Saudi connection,” write the reporters. “It illuminated a series of missed opportunities to resolve questions about links between one of Washington’s closest allies and the deadliest attack in the nation’s history.” Read More →

Person of the Week

A year after Juan Guaidó took the presidential oath, nearly sixty countries now recognize the interim government as the legitimate representative of the Venezuelan people. Still, the Maduro regime remains in power, further threatening the country and the world every day. As Venezuela becomes increasingly engulfed in internal strife, the international community must prepare for the most dire scenarios. What would be the reverberations of complete state collapse? How might various stakeholders— from Venezuelan actors to regional neighbors to Russia or armed groups—respond?

Iran plane tragedy proves lessons of MH17 have not been learned

Amid the outpourings of anger and grief over the downing of a Ukrainian passenger plane by Iran, the disaster also raises troubling questions about aviation security and the apparent failure to learn from past tragedies of this nature such as the 2014 MH17 attack.