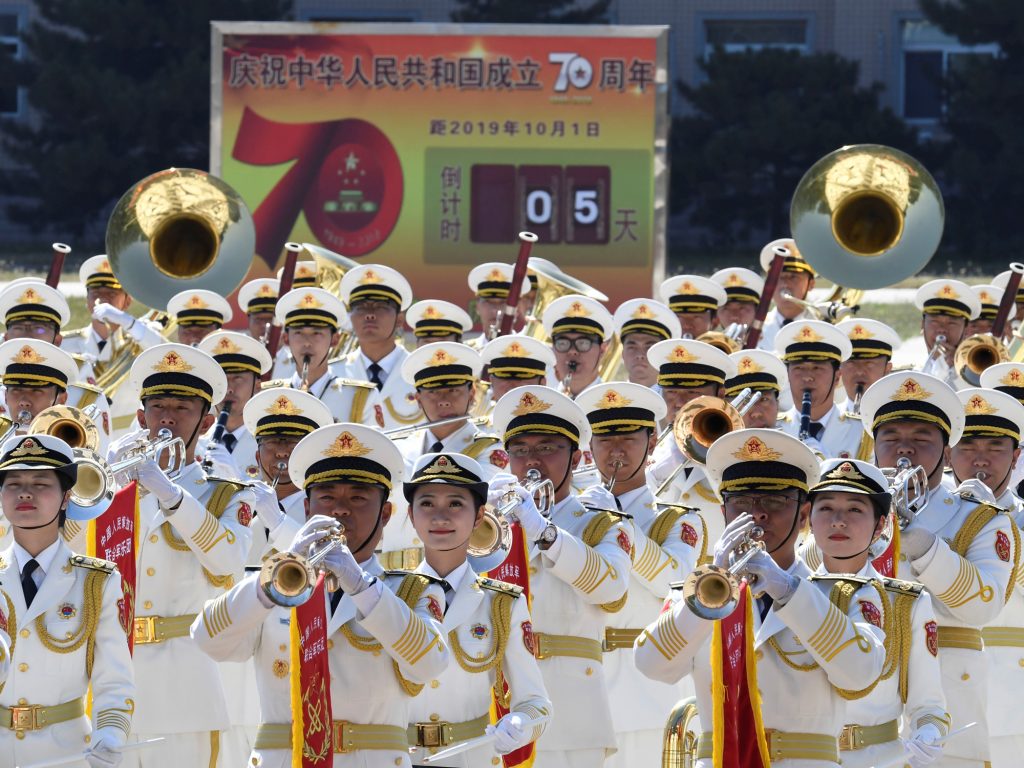 This isn’t the outcome President Trump anticipated when he started his trade war with China some 15 months ago.

Chinese President Xi Jinping this Tuesday will stage the mother of all military parades through central Beijing, celebrating not only the 70th anniversary of the People’s Republic but also underscoring his quest for “national rejuvenation” and global leadership in the face of damaging US trade and economic pressures.

Meanwhile, President Trump – famously admiring of such spectacles – is hunkered down in Washington, fending off impeachment efforts and domestic political assault. Reports on Friday that White House officials are considering new financial sanctions on China, including a plan that would stop Chinese companies from listing in the United States, shook markets and underscored the declining odds for any meaningful trade agreement.

The underlying message: It is China’s moment. With apologies to President Trump, President Xi Jinping will be demonstrating to the world that he is busy making China great again. With every day, China’s leadership is more openly demonstrating its desire and capability to shape the global future in the face of a distracted America that, in the view of Chinese officials, has provided Beijing a global opening through overstretching its resources and underappreciating its allies.

Writing in the People’s Daily this past week, the Communist party mouthpiece, Foreign Minister Wang Yi said China’s global standing had achieved a historic high, boosted by its diplomatic activism. As quoted in the South China Morning Post ahead of this past week’s UN General Assembly, Wang said China would seek a lead role in reshaping the international order (the product of US leadership). It would expand and defend its national interests, he said, and it would resist foreign interference in its affairs.

For good measure, he said strategic cooperation with Russia was at a historic high due to relations between President Xi and Vladimir Putin. What went unsaid is that those who have argued that the United States’ rich alliances were a decisive asset in its competition with China would need to reexamine their facts.

Yang Jiechi, China’s highest-ranking diplomat and a Politburo member, recently laid out the sense of external siege behind this global ambition.

“Our determination and resolve,” he said, “are as firm as iron when it comes to defending our national interests and dignity on issues about Taiwan, maritime affairs, Xinjiang, Tibet, Hong Kong as well as trade rifts. No one should expect China to swallow the bitter fruit that would damage our own interests.”

His accomplishments thus far are historic in nature.

In March 2018, he eliminated the two-term limit on the presidency, ensuring that he could continue to hold three of the country’s most significant jobs – communist party leader, president, and chairman of the Central Military commission – through at least 2027. His anti-corruption campaign has punished 1.5 million officials, and no university or institute worth its name (and caring about its future) in China isn’t studying Xi Jinping “thought,” which includes the inviolability of party leaders and “socialism with Chinese characteristics.”

Government choreographers have designed the 70th anniversary celebration this coming week both as a show of national strength and a means to underscore President Xi’s personal, unrivaled, decisive leadership. Streets are awash with bright, red banners urging the people to rally behind him.

At the same time, Chinese leadership is taking no chances.

“Even by the standards of an authoritarian government, the rules are strict,” writes the New York Times’ Javier C. Hernandez, who himself was forced to relocate from his apartment near the celebration. “The city has imposed bans on flying kites, drones, balloons and captive pigeons, a popular pastime, in many areas. Some Chinese cities are barring officials from consuming alcohol in the run-up to the parade.”

More important, however, are the challenges facing President Xi’s leadership after the parade: demographic aging, a slowing economy, continued Hong Kong protests, increased support for Taiwanese sovereignty ahead of January 2020 presidential elections and the inefficiencies that are inevitable with excessive party control.

Given China’s increasingly centralized and personalized leadership, President Xi may be at the same time the world’s most influential leader and one of its most vulnerable, as any unanticipated problems facing China will land at his door.

Yet there’s also a brittleness that lurks not far beneath the surface.

“For all its successes so far, however, the Xi model, fully realized, may simply be too much of a good thing,” writes Elizabeth Economy of the Council of Foreign Relations in Foreign Affairs. “Too much party control – perhaps too consolidated into Xi’s hands – has contributed to economic stagnation.”

“Xi’s predilection for state control in the economy has also starved the more efficient private sector of capital,” she says. “Xi’s consolidation of power has not only cost China’s economy but raises suspicions around its enterprises abroad. The deepening penetration of the party into Chinese business has caused all Chinese companies to be viewed as extended arms” of the Communist party.

While Washington in coming days will be absorbed by the unfolding Trump drama set off by the Ukraine-related whistleblower, my gaze instead will be more on Beijing and the generational impact of President Xi and leadership gambles that are already making him one of the most consequential leaders in China’s recent history.

Yet President Xi’s pursuit of party control and nationalistic rhetoric has made his legitimacy and that of his Communist party more susceptible to political and economic shocks than is generally recognized.

Just because Washington’s politics for the moment appear to the world to be polarized and chaotic, that doesn’t necessarily mean the US democratic system and its institutions are less stable and enduring than those of China.

And that’s what should worry Xi this week as he watches his military pass.

Frederick Kempe is president and chief executive officer of the Atlantic Council. You can follow him on Twitter @FredKempe. ﻿

Must-Reads from a World in Transition

This week’s top reads below include Richard McGregor’s rich profile of Xi Jinping in Foreign Affairs, David Kramer’s look in the American Interest at the risks for Ukraine of the unfolding controversy in Washington and Matthew Karnitschnig’s troubling report on declining US-German relations.

Also don’t miss this week’s must-read, Yaroslav Trofimov’s WSJ essay on Afghan concerns about what a peace deal with the Taliban could mean to their progress and freedoms.

Richard McGregor’s profile of China’s Xi Jinping in this month’s Foreign Affairs is a must-read examination of a leader whose autocratic ambitions for internal control and global reach have surprised even the Communist party colleagues who tapped him.

They “don’t appear to have known what they were getting,” McGregor writes, namely “the Reddest leader of his generation.”

What they got is someone who in less than seven years “has harshly suppressed internal dissent, executed a sweeping anticorruption campaign, and adopted a bold, expansive foreign policy that has directly challenged the United States.”

McGregor tells the story of this unique individual, who grew up as a Communist leader’s child of privilege before being forced to denounce his father and be dispatched to the countryside at age 17. McGregor concludes that this time “scarred him but also readied him for the battles ahead.” Read More →

China: Why Taiwan is unfinished business for Xi Jinping

Running out of options, Hong Kong protesters dig in

For President Xi, the renegades in Hong Kong and Taipei lurk as reasons for concern as he presides over next week’s parade.

Writing for the FT, Lucy Hornby notes that Taiwan’s future, “amid tensions between Washington and a newly powerful Beijing, is the greatest unresolved legacy of the Chinese civil war.” Similarly, “in Beijing officials see the Hong Kong protests through a historic lens, rather than as a response to current conditions.” Read More →

On the ground in Hong Kong, Nikkei Asian Review reporters provide a rich narrative: “at times, the protest sites have come to resemble battlefields, with barricades smashed across the tarmac, fires blazing and rubber bullets flying… Protesters say they will not back down until their other demands are met — demands that include an amnesty for arrested prisoners, and true universal suffrage. The Beijing-backed government is unlikely to acquiesce, leaving the members of the ‘water revolution’ to dig in for a long battle for the soul and the streets of Hong Kong.” Read More →

It’s Ukraine That Loses in Whistleblower-Gate

Explainer: Five things about the Ukraine controversy you need to know (plus a freebie)

President Trump’s newest and most serious Congressional challenge yet, his alleged solicitation of foreign help to investigate Joe Biden, consumed much of the domestic and global news cycle this week. Whatever comes of the Congressional investigations, Ukraine is in danger of losing.

Former New York Mayor “Giuliani,” David J. Kramer writes for the American Interest, “seems unconcerned with the damage he is doing to Ukraine and its relationship with the United States.” Kramer adds “Ukraine cannot afford to lose—or even appear to be losing—the backing of the United States… One person who must be smiling at all this is Russian President Vladimir Putin.” Read More →

The end of the German-American affair

Writing from Berlin, Politico Europe’s Matthew Karnitschnig, chronicles the disturbing decline in US-German relations, from levels of government right through the larger society.

He writes that “the fraying of ties — which began long before Trump came to power but has accelerated since — carries implications that stretch far beyond the two countries’ bilateral relationship. With China seeking to expand its influence in Europe, and Russia eager to exploit the transatlantic rift, the disintegration of German-American unity would have profound implications for the future of NATO and the broader global order.” Read More →

#5 THE PERILS OF AFGHAN PEACE

This week’s must-read, is Yaroslav Trofimov’s Saturday Essay on the perils of US-Taliban peace talks to end America’s longest war in Afghanistan, which the State Department is describing as merely “suspended” following Trump’s abrupt decision to cancel a signing ceremony at Camp David.

“The Taliban,” writes Trofimov, “are now stronger than ever. An exhausted America, no longer determined to bring democracy to the Muslim world, just wants to leave… Many Afghans, while longing for peace, worry about the consequences of rushing to a deal with the insurgency.”

Despite the difficult military situation, significant progress has been made to improve the freedoms and livelihoods of Afghan’s. “Many Afghans today bitterly oppose any accommodation with the Taliban that would surrender the civil and political freedoms they have acquired….Many in this new generation—one that believed American promises—would have no place should the Taliban return to power in Kabul.”Read More →

Quote of the Week

An evening dedicated to celebrating the individuals who have helped drive positive change in their societies and embody the commitment to international cooperation that underpins the Atlantic Council’s mission.

Global Citizen Awards by David A. Wemer and Jasper Gilardi

Court decision rebukes Johnson, but will it strengthen his hand?

The Supreme Court succeeded in making a unanimous ruling correct in law and seemingly devoid of political influence, but it could only strengthen the prime minister’s support among Brexit voters.