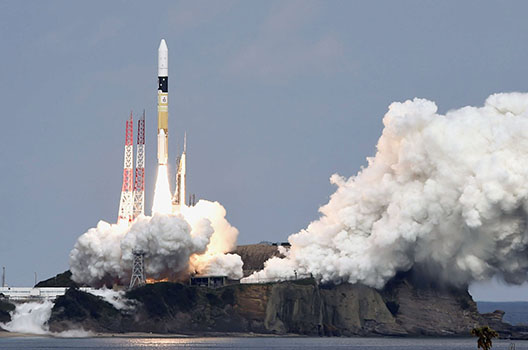 A H-IIA rocket carrying Hayabusa 2 space probe blasts off from the launching pad at Tanegashima Space Center on the Japanese southwestern island of Tanegashima, in this photo taken by Kyodo December 3, 2014. The Japanese space probe named for a falcon blasted off on Wednesday, setting off on a six-year round trip journey to an asteroid for samples that scientists hope will help reveal the origins of life. The launch of the Hayabusa 2, postponed twice due to bad weather, comes less than a month after a European Space Agency probe landed on a comet in a pioneering mission and helps Japan's space programme put a troubled past further behind it. Mandatory credit. REUTERS/Kyodo

The future of Big Space depends on the defensibility of big satellites.

Last week, Rick Ambrose of Lockheed Martin Space Systems gave the 15th address in the Atlantic Council’s Captains of Industry series, our forum for aerospace and defense executives to address the public interests their companies serve and the public policies that affect their markets. Ambrose’s talk on “Thriving in the Evolving Space Sector” covered several big ideas, including prospects for colonizing Mars. The impulse to explore and settle is fetching, but in the short term, it’s information from Earth orbit that makes space matter. And how those flows of information are best defended will strongly affect the future structure of the space industry.

Ambrose is a fan of the book and movie The Martian, not just because he found it “entertaining,” but because “it also brought a lot of positive attention to space.” Having others talk up your market is usually helpful. But apart from planetary colonization, the space business shouldn’t need attention, for the global economy runs on it. Positioning, navigation, timation, and weather forecasting all require Earth-orbiting satellites. Indeed, most space exploration is also economically unmanned, and as I wrote several years ago, in most other fields of endeavor this is a hallmark of cost-effectiveness. In the short term, the value of space lies primarily in the information it moves around the Earth.

Then again, terrestrial substitutes like transoceanic fiber optic cable have suppressed growth in satellite communications ever since the market bust of the late 1990s. Rates are now down another 50 percent from their peak of a few years ago. That’s problematic for Lockheed: the company historically has worked largely in communications satellites. Today it has three under construction, and sustaining a big business on three of something is an indication of how big and valuable that something can be.

Price sensitivities in the end market for bandwidth also mean cost pressures on launch providers. Ambrose said curiously little about United Launch Alliance. Lockheed owns half that joint venture with Boeing, and Ambrose sits on its board. In response to a question, he did observe that ULA and SpaceX emphasized “different business models”—long at the largest customer’s behest, the former company has pursued perfection over lower costs. That competing strategy, however, is now not just for SpaceX. Over the past few years, smaller venture-backed space launcher firms have attracted over $2 billion in funding.

What works for boosters seems also working for satellites. Andy Pasztor of the Wall Street Journal recently wrote about how several startups in the industry are working to build satellites faster, less expensively, and with greater architectural standardization. That could allow frequent refreshing of technology without full redesigns. Ambrose’s people are using 3D printing to build up titanium tanks in 3 months; the conventional approach took 24. In 10 to 15 years, Ambrose suggested, the industry could be building whole satellites that way. By then, he thought, there also will be many more nations involved in space programs. In the long run, that may provide greater resources for colonization; in the short run, it will create more parties with interests in Earth orbit.

Let’s consider another movie. Ambrose was less enthused about Gravity; he and his engineers found the physics dodgy. The drama does illustrate one of the potential outcomes of a war in Earth orbit—the Kessler effect of runaway collisions with cascading volumes of debris. That issue also gets to the trouble with countermeasures in space. As one of the attendees at our subsequent luncheon observed, deploying chaff to defend satellites might not be the best idea, as “it tends to hang around.” Chaff was developed during the Second World War, but as another discussant pointed out, it wasn’t the only solution initially proffered to the radar problem, whether over the Rhineland in the 1940s or North Vietnam in the 1960s. Eventually, the problem of missile attacks on aircraft was addressed with jammers, flares, defense-suppression aircraft, and after SAC’s debacle in the Christmas Bombing of Hanoi, smarter tactics. Aircraft carriers are defended, he went on, by succeeding layers of fighter aircraft, long-range missiles, and shorter-range missiles. A similar fusion of techniques in space, he argued, could defend big, expensive satellites.

Note, however, that by the 1990s, that fusion of techniques for aviation had been substantially forgone in favor of low-observability. As I did last week, I mention again Colonel Mike Pietrucha’s essays at War On The Rocks in March and April on what could be “the Air Force’s overcommitment to stealth.” Over time and several programs (F-117, F-22, F-35), the technical complexity of stealth became the preferred alternative to the operational complexity of a layered solution. In space, the oft-mentioned alternative to the “Battlestar strategy” of layered defenses—that’s how yet another attendee put it—is disaggregation of the capabilities of large satellites into constellations of smaller satellites. That brings its own problems: the electromagnetic spectrum is already rather crowded up there, and the multiple downlinks and crosslinks will need defending too. As one reader pointed out, the latter issue also may be the critical assumption in my argument last week about networked stealth fighters controlling drones.

Which approach ultimately will work better matters not just to the military, but to the contractors as well. Customer commitment to stealthy, manned fighter jets and nuclear-powered aircraft carriers has brought big benefits to Lockheed Martin and Huntington Ingalls. Comparative commitments to drones and submarines instead could have brought big benefits to General Atomics and General Dynamics. If big satellites continue to provide cost-effective and defensible concentrations of functionality, then Big Space will have a defensible position in the market. If the customer concludes that the winning military strategy requires disaggregation—and space is a domain unlike air or sea—then it’s good that Ambrose is pursuing process innovations in satellite building. His company may need the flexibility to build a lot more smaller things cheaply, and he’s preparing for it.

James Hasik is a senior fellow at the Brent Scowcroft Center on International Security.