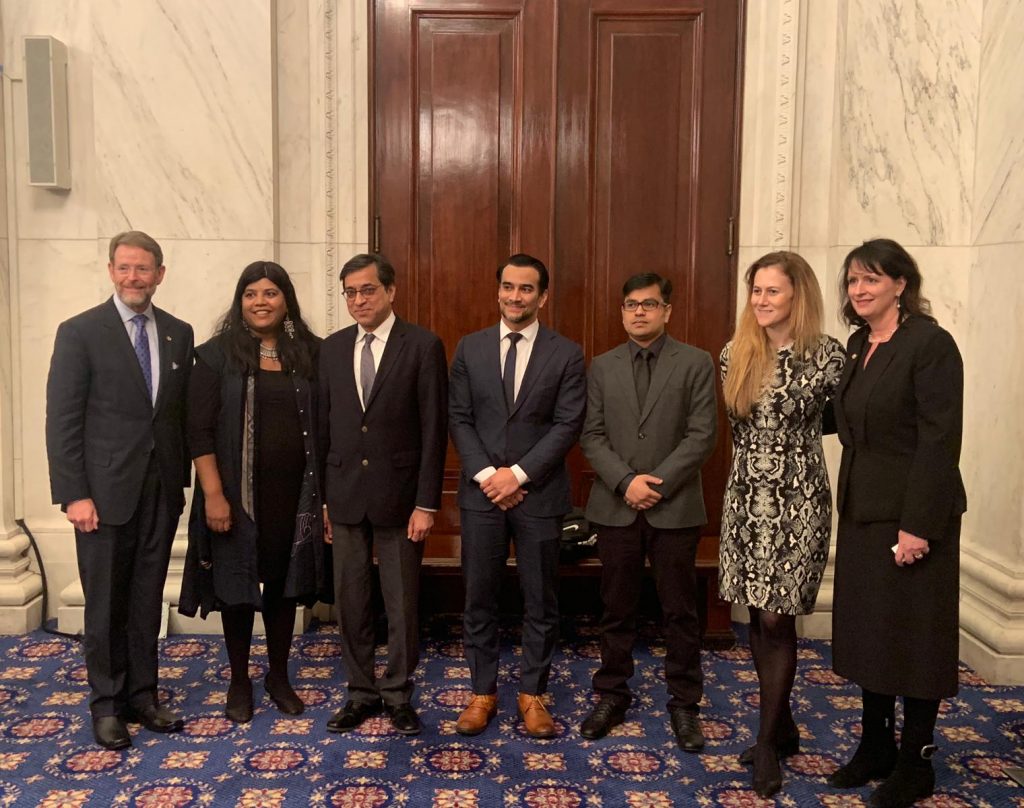 Panelist and witnesses at the United States Commission on International Religious Freedom hearing held on March 4, 2020.

On March 4th, 2020 the United States Commission on International Religious Freedom (USCIRF) held a hearing to discuss how citizenship laws can be used to deny religious minorities rights guaranteed by their citizenship, making them disproportionately vulnerable to exploitation and mass atrocities. The hearing focused on the case of Rohingyas in Burma and Muslims in India who have been subject to ethnic cleansing, discrimination and violence in recent years. The hearing, chaired by USCIRF Commissioner Tony Perkins, was comprised of four witnesses: Naomi Kikoler, Director of the Simon Skjodt Center for the Prevention of Genocide at the US Holocaust Memorial Museum; Dr. Azeem Ibrahim, Director of Displacement and Migration at the Center for Global Policy; Aman Wadud, a human rights lawyer from Assam, India, and Dr. Ashutosh Varshney, Sol Goldman Professor of International Studies and the Social Sciences and Director of the Center for Contemporary Asia at Brown University.

Chair Perkins introduced the panel with a brief history of the commission and stressed the right to nationality as being an integral human right. His remarks were followed by Vice Chair Gayle Manchin and Commissioner Arunima Bhargava who touched on the history of discriminatory citizenship laws related to recent developments in Burma and India.

Testimonies began with Naomi Kikoler, who recently returned from a ‘bearing witness’ trip to the Cox Bazaar refugee settlement. She emphasized that heeding the warning signs of discrimination can prevent atrocities and detailed steps to support a more proactive approach in preventing genocide. She recommended that the United States closely monitor changes in citizenship laws, train foreign service officers in atrocity prevention techniques, establish relations with various stakeholders to access on the ground information, and establish a working group to identify potential triggers for increased violence.

Dr. Azeem Ibrahim described the discrimination faced by Rohingya Muslims in Burma, highlighting that such trauma tends to happen over a long period and is often justified by a dubious but difficult to challenge legal framework. He noted that recent citizenship laws in India bear similarities to those of Burma after 1982, creating identifiable groups that can be easily targeted.

Aman Wadud, a human rights lawyer from Assam, India, spoke of his personal experience defending hundreds of citizens of Assam rendered stateless under the National Register of Citizens (NRC). He described instances where the “Foreigners Tribunal,” in charge of differentiating between citizens and foreigners, abused its power through arbitrary and discriminate rulings. He explained how the NRC in Assam has severely affected poorer segments of society and disproportionately impacted women’s rights.

Lastly, Dr. Ashutosh Varshney emphasized that the issues of Citizenship Amendment Act (CAA) and NRC are constitutional issues, going against the founding values of India’s secular democratic institutions: equality, diversity, and tolerance. He argued that the law denies certain Muslim communities asylum based on their religion and attempts to define India as a homeland solely for Hindus. The key issue in this debate, according to Dr. Varshney, is that the government has not defined how the NRC will be implemented and what documents will be necessary to prove citizenship. The CAA and NRC has thus rendered uncertain the future of millions of Indian Muslims.

The panel then turned to questions. Vice Chair Nadine Maenza asked about “timely interventions and impunities measures” to prevent discrimination in these cases, Ms. Kikoler replied that the US government and Department of State (DoS) should clearly hold the Indian and Burmese governments accountable. Dr. Varshney added that while internal mechanisms such as judicial review, federal checks, and nonviolent protests are in place, the US government should activate its diplomatic channels to address these issues. Asked about the psychological impact of proving one’s citizenship, Mr. Wadud termed the process as “painful and dehumanizing.” Dr. Varshney argued that it entails harassment and enables violence against Indian Muslims because their Indian identity is directly challenged.

In conclusion, the witnesses agreed that the United States can play an important role actively responding to these instances of human rights violations. They emphasized the significance of the recent injunction issued by the International Court of Justice (ICC) as an important example of the United States pressuring the Burmse government to prevent the genocide of Rohingyas. The witnesses agreed that in the case of India, the United States can use its diplomatic and economic influence to pressure a withdrawal of the CAA and NRC.