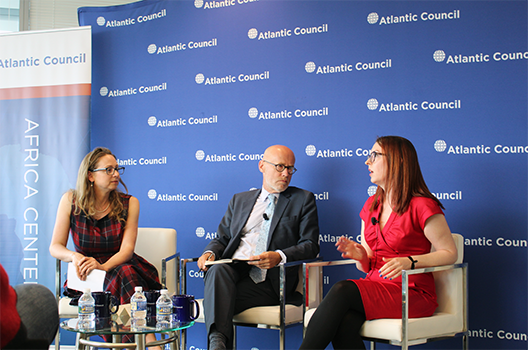 In his remarks, Dr. Englebert presented his and Jené’s research on local Congolese politics and the implications of the 2015 découpage policy that split the DRC’s eleven provinces into twenty-six regions. He argued that instead of bolstering local power outside the nexus of corrupt elites in Kinshasa, découpage’s disingenuous implementation reinforced patronage networks, upset longstanding state-society relations, and institutionalized ethnic tensions and grievances in Congo’s provinces.

In the ensuing discussion moderated by Bruton, Englebert and Jené discussed the status of Congolese politics following a flawed election last December that saw Félix Tshisekedi attain the presidency. They noted that despite Tshisekedi’s victory, ex-President Joseph Kabila’s Common Front for Congo party maintains a strong hold on the National Assembly and recently won many of the new provincial governorships. They warned that as long as Kabila loyalists retained these institutional powers, the proposed coalition government between Tshisekedi and Kabila would be largely aspirational. Englebert predicted that Tshisekedi would be on a collision course with Kabila should he pursue an ambitious reform agenda.

Among those in attendance and participating in the discussion were Ambassador Herman Cohen, former assistant secretary of state for African affairs; Ambassador Lange Schermerhorn, former US ambassador to the Republic of Djibouti; and Dr. Vivian Lowery Derryck, former assistant administrator for Africa of the US Agency for International Development.