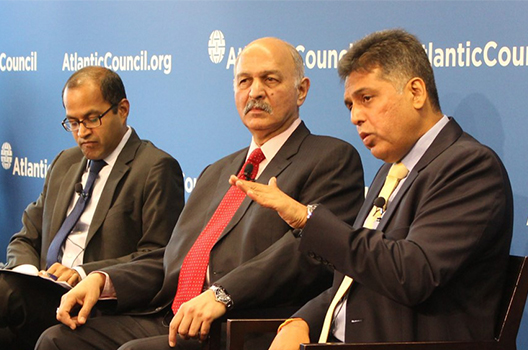 On July 24, 2017, the South Asia Center hosted a discussion on the role of media in fostering relations between India and Pakistan. Senator Mushahid Hussain, Member of the Pakistani Senate and Former Minister of Information and Media Broadcasting, and India’s Former Minister of Information and Broadcasting Manish Tewari discussed the role of journalists and social media in both fueling and addressing tensions between the two nations.

The speakers spoke extensively about the role of news media in shaping public perceptions of the opposing country. They agreed that while some elements of the media encourage national narratives predicated on distrust and hostility, it is important to maintain a free and open media which allows the exchange of all ideas. They suggested that the states should construct factual counter-narratives to encourage informed popular opinion.

Both speakers addressed the fact that although there have been diplomatic initiatives by media organizations in both countries, these efforts have largely fallen victim to a fluctuating political climate. They asserted that the media is not solely responsible for strained relations, and that the government must work to dispel deep seated animosity between the two nations. Finally, the speakers addressed questions on the regulation of social media and popular applications such as WhatsApp, the possibility of cricket serving as a common platform of agreement, and whether and how to bring about accountability among the members of the media fraternity.