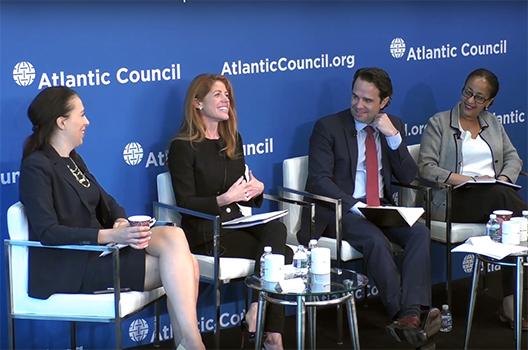 On Thursday, May 16, the Africa Center hosted a discussion on women’s entrepreneurship and gendered barriers to raising capital in African markets.

During the discussion, Kaufman gave an overview of OPIC’s new 2X Women’s Initiative, which has mobilized over $1 billion for businesses that are women-owned, led, and supported across the developing world. She underscored the extent to which Development Finance Institutions (DFIs) like OPIC are pushing each other to create gender-equitable change. She expressed hope that a coordinated effort will have outsized impacts in African markets, where private equity funds rely heavily on the DFI community to raise capital.

Cusack touched on his experience leading CrossBoundary, an investment firm specializing in fragile and frontier markets across much of the developing world, and elaborated on its success in achieving gender parity. He stressed that instead of implementing an artificial quota policy, the firm worked to improve its access to gender-diverse talent. Data shows that there is a positive correlation between gender balance and performance in emerging market private equity and venture capital investing, with gender-equitable funds receiving an internal rate of return about 20 percent higher than those that are male-centered. However, while talent is evenly distributed, Cusack noted, opportunity still is not.

Berhane discussed her experience building Cepheus Growth Capital, a private equity firm focused on small and medium-sized enterprises in Ethiopia. She stressed the value of ensuring that firms maintain gender diversity in their own leadership teams and in the companies in which they invest. She cited a recent International Finance Corporation report that sets a minimum of 30 percent men and women in leadership teams as a benchmark, but acknowledged that it is challenging in a market like Ethiopia where private equity is still a nascent asset class. She concluded that more forums are needed to facilitate women’s access to capital, especially those working in first-time funds.

An interactive question and answer period followed, during which the audience engaged panelists on the role of other US government agencies in advancing women’s entrepreneurship and ways to improve women’s access to capital in sectors that are particularly male-dominated, including energy and financial services.