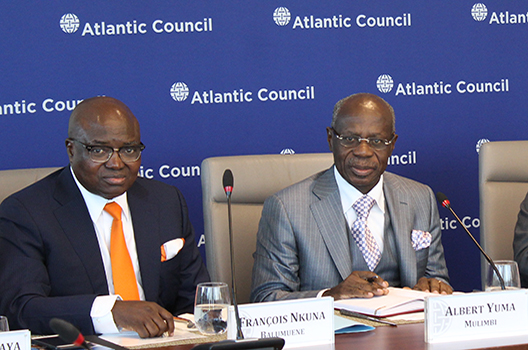 H.E. François Nkuna Balumuene, Ambassador of the DRC to the United States (left), and Mr. Albert Yuma Mulimbi, chairman of Gécamines and president of the Congolese Business Federation (right), discuss the DRC’s new mining code and its implications for companies operating in the sector at the Atlantic Council. (James Wholley/Atlantic Council)

In his prepared remarks (official document attached), Mr. Yuma emphasized the importance of the mining industry in the Democratic Republic of the Congo (DRC) to the overall wellbeing of the country, calling it the “lungs” of the Congolese economy. He highlighted the 2017 production figures of DRC’s most profitable minerals, including copper, cobalt, and coltan, but stressed that the industry was not benefitting the Congolese people as much as it should. According to the speaker, the new Congolese mining code seeks to change this, increasing taxes on profits from 30 to 35 percent and royalties from 2 to 3.5 percent for copper and cobalt, and expanding the government’s stake in new mining projects from 5 to 10 percent. Mr. Yuma acknowledged the concerns expressed by some of the world’s largest mining companies in response to the new mining code, but emphasized that profits should increase once the new code is introduced and the DRC reputation as an attractive mining destination should not be tarnished.

A discussion, moderated by Dr. J. Peter Pham, Atlantic Council vice president and Africa Center director, followed Yuma’s remarks, with participants focusing on the transparency of the mining industry’s supply chains and networks in the DRC and the various ways in which civil society concerns would or would not be incorporated in the country’s policies.