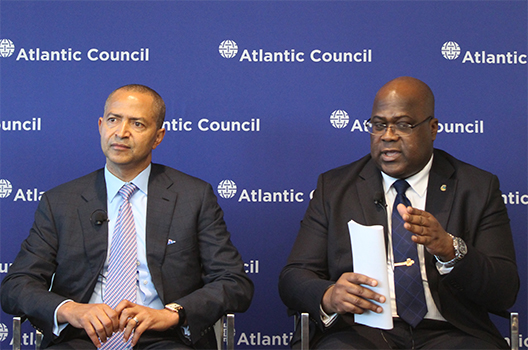 In their remarks, Katumbi and Tshisekedi announced that the Congolese opposition would field a unified candidate in the presidential election scheduled for December 23, 2018. Incumbent Joseph Kabila, whose constitutionally-mandated two-term limit expired over eighteen months ago, has twice delayed elections. Katumbi stressed that the Congolese opposition is united and working together for a brighter future, citing his joint visit to the United States with Tshisekedi as an example of their cooperation. Both candidates warned participants that Kabila was resurgent and reintroducing his stranglehold on the country, noting that it is “a very dark time for the electoral process [in DRC].” “We’re here to sound the alarm,” said Tshisekedi, “Tomorrow when the catastrophe arrives, you cannot say you didn’t know.”

The two also recounted how electoral experts from their respective political formations were working together, including a recent joint meet with the technical team from the Organisation internationale de la Francophonie.

A discussion, moderated by Dr. J. Peter Pham, Atlantic Council vice president and Africa Center director, followed Katumbi and Tshisekedi’s remarks, focusing on the role that the international community could play in ensuring that credible elections take place this December as well as how to ensure the country gets the humanitarian aid it urgently needs for the more than five million displaced persons and the estimated thirteen million facing starvation – crises both speakers blamed on the poor governance of the incumbent regime.

Also in attendance and participating in the discussion was Ambassador Larry Wohlers, senior coordinator for the Great Lakes region of Africa at the US Department of State; Ambassador William Garvelink, former US Ambassador to the DRC; and three former US assistant secretaries of state for African affairs: Ambassador Herman Cohen, Ambassador Jendayi Frazer, and the Honorable Constance Berry Newman (the latter two are also, respectively, an Atlantic Council board director and a senior fellow in the Africa Center). Also at the event were a large number of US and non-US government officials, business leaders, and civil society representatives.