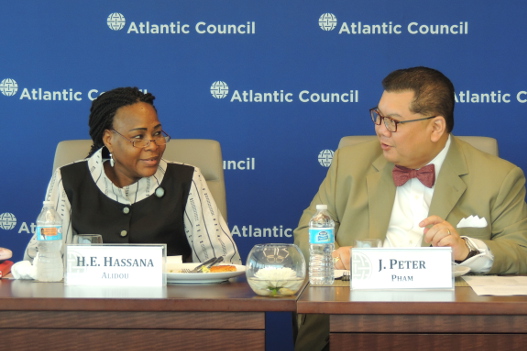 As a key actor in West Africa and the Sahel, the Republic of Niger faces a number of regional challenges. The country has been impacted by conflicts in neighboring Libya, Mali, and Nigeria. At home, the Nigerien government struggles to bring economic and educational opportunities to the country’s rapidly expanding youth population.

On June 8, the Africa Center organized a roundtable discussion with H.E. Hassana Alidou, new Ambassador of the Republic of Niger to the United States, to explore Niger’s development and security priorities.

After a welcome by Africa Center Director J. Peter Pham, Alidou spoke about the importance and value of regional cooperation against threats like Boko Haram, Al Qaeda in the Islamic Maghreb, deteriorating conditions in Libya, and the Mediterranean migrant crisis. She noted that security and development cannot be divorced from one another, and that Niger must work toward both.

She noted that Niger is working to attract private investment and modernize its agricultural economy for eventual export. The Government of Niger also recently finalized a deal to construct a much-desired railway to the coast of Benin.

After delivering her prepared remarks, Alidou engaged with participants in a lively discussion, moderated by Pham. Also in attendance from the Embassy of Niger were Deputy Chief of Mission Boubacar Moussa Rilla and Defense Attaché Colonel Abdoulaye Badie.