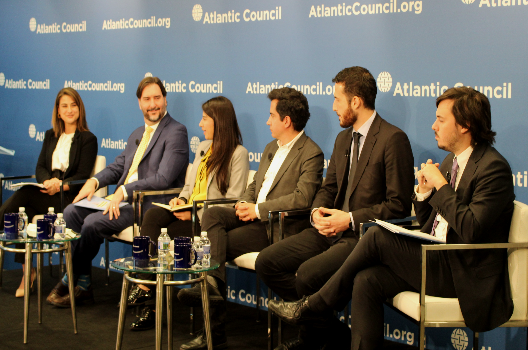 2018 saw political tides turn in three of Latin America’s largest democracies. These elections also saw deep polarization and distrust in institutions among Brazilians, Mexicans, and Colombians in an information environment ripe with disinformation. Following a year-long effort in which the Atlantic Council’s Adrienne Arsht Latin America Center and its Digital Forensic Research Lab (DFRLab) exposed and explained disinformation around key elections in Brazil, Colombia, and Mexico, on Thursday, March 28, 2019, the teams launched a comprehensive report that outlines trends and lessons learned from the 2018 presidential elections in Latin America.

Graham Brookie, director and managing editor of the Atlantic Council’s DFRLab kicked off the event by painting a picture of the global nature of disinformation and its repercussions. “The challenges of disinformation will continue to evolve in ways we can’t fully predict. And as they do, the more people working on this issue, the better the chances for addressing the risks to democracies and fact-based discourse,” Brookie stated.

In laying the groundwork for the day’s discussions, Andrew Sollinger, publisher at Foreign Policy, pointed to the dangers of disinformation not only around elections in Latin America, but globally, emphasizing the important role media can and should play in combatting the spread of disinformation. As elections in countries such as India and Argentina approach, takeaways from the 2018 elections in Brazil, Mexico, and Colombia can assist with fact-checking and debunking of disinformation, Sollinger noted.

To dive deeper into the role of polarization, disinformation, and automation in Latin America around the 2018 elections, Roberta Braga, associate director at the Adrienne Arsht Latin America Center, moderated a conversation with leading experts from the region.

Gerardo de Icaza, director of the department of electoral cooperation and observation at the Organization of American States (OAS) explained the characteristic widespread distrust in institutions and electoral process of these elections. He noted that “from a political party perspective, it works to question the establishment, it works to have conspiracy theories, it works to say the system is rigged unless I win. And even if I win, it was rigged but I won anyway,” which hits trust at its core. He explained the phenomenon of widespread mistrust in terms of the essence, incompetence, and failure to adapt by electoral management bodies. In terms of electoral regulatory bodies, de Icaza explains essence as the ability to point out the wrongdoing without being called biased. Incompetence is the failure of electoral bodies to realize their out dated communications approach, especially in the context of social media, where political candidates have millions of followers and an exclusive communications team. Electoral bodies, thus, fail to adapt, because, in many instances, they believe to be above social media and this kind of discourse.

For Tania Montalvo, executive editor at Animal Politico and coordinator of Verificado 2018, the main challenge when combatting disinformation in Mexico is disinformation from within the government. Montalvo defended “innovative forms of investigative journalism with citizens at its core, and collaboration” as mechanisms to effectively combat disinformation.

Carlos Cortés, co-founder of Linterna Verde layed out the challenges ahead for Colombia in this realm. He emphasized that first, civil society must leverage their effort to better understand the scope of the issue and develop best tools to combat it. Secondly, the media must better assess their fact-checking efforts. Lastly, incentivizing the ongoing process of building digital literacy among users of social media platforms.

Amaro Grassi, lead coordinator of the Digital Democracy Room at the Department of Public Policy Analysis at Fundação Getulio Vargas (DAPP/FGV) agrees with other panelists that a “coalition-like approach to solve the issue of disinformation in all its complexity” is the only viable approach. He argues that the government, represented by the electoral body, and media must equip themselves to identify and combat disinformation. He adds the role of tech companies to assist with data management as support to the work of fact-checkers.

The director at InternetLab, Francisco Brito Cruz, defended the need to avoid a technocratic approach of blaming technological advancements and broader access to technology as causes of widespread disinformation. In the case of Brazil, “for the first time in 30 years, we [had] real grassroots, robust right-wing or conservative activism,” which was a major shift in the country, affecting how media functions.

Montalvo attributed the success of Verificado 2018 in setting the political agenda during the elections in Mexico to multidisciplinary collaboration, diversification of sources, prioritizing citizens’ needs, and the unification of partnerships under one single brand: Verificado 2018, in this case.

Moltalvo focused on the importance of explaining rather than accusing the source of disinformation, to which Cortés added the importance of emphasizing the need to bring awareness to the effects of amplification. As Grassi explains, not every piece of information can go through the fact-checking process. For him, during elections, civil society and electoral bodies must be in alignment to understand what types of information should be checked, based on the detriment it may bring to the democratic process itself.

The question of the day was regulation. There is no doubt that there must be an institutionalized mechanism to hold actors accountable in the digital space without threatening freedom of speech. De Icaza brought to the discussion the issue of a “black market” in campaign funding with regards to disinformation. The hiring and use of bots, for example, is not accounted for in campaign finances. Brito Cruz pushed for analysis and changes to compliance and liability regulations on social media, including third party posts.

Katie Harbath, public policy director for global elections at Facebook, outlined the five approaches the company has taken to protecting the integrity of elections in the platform, while still protecting good civic engagement. Their efforts have included: cracking down on fake accounts; reducing false news by controlling their reach and partnering with fact-checkers; advocating for more transparency around political advertisement through improved regulations; disrupting bad actors both foreign and domestically, by differentiating between perceived truths and facts; and civic engagement through information about participating in the democratic process.

Both Harbath and Carl Woog, director and head of communications at WhatsApp, noted the importance of accounting for differences in design of each platform. Woog explained the challenges of the platform, having privacy at its core. Still, in Brazil, one of its largest markets, WhatsApp was able to ban thousands of accounts that presented abnormal activities in the election period. WhatsApp generally bans around 2 million accounts per month related to automation.

Describing the Lie Detector project by La Silla Vacia in Colombia, Woog says “the presence of a fact-checking initiative on WhatsApp, even if it doesn’t reach every single person, is contributing to a conversation about misinformation in society, raising our awareness to disinformation on WhatsApp.”

Looking ahead, the upcoming elections in various parts of the world are the next challenge for building digital resilience.