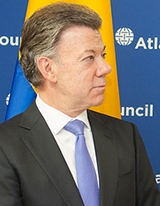 US Secretary of Commerce Penny Pritzker was among the attendees who also included the ranking member on the House Foreign Affairs Committee, Representative Eliot Engel, and Representative Gregory Meeks, a member of the House Western Hemisphere Subcommittee. Business leaders joined from a number of influential sectors with top executives in attendance from Lockhead Martin International, Unilever, Google Ideas, and EADS North America.

President Santos visits Washington at a time of transformation in Colombia. The Colombian government is in the midst of negotiating an end to the fifty year conflict with the Fuerzas Armadas Revolucionarias de Colombia (FARC) at the same time that the country is witnessing an impressive moment of economic development and will soon become a member of the Organization for Economic Cooperation and Development (OECD). Colombia is a founding member of the Pacific Alliance, which together with Mexico, Peru, and Chile, makes up nearly a third of the region’s GDP. US-Colombia trade has increased 20 percent since the signing of the bilateral free trade agreement, and an EU-Colombia trade agreement took effect this past August. Cities like Medellín have received international recognition for innovative urban policy.

These great successes of Colombia and its future trajectory were discussed at the Atlantic Council dinner.

Photos from the Evening