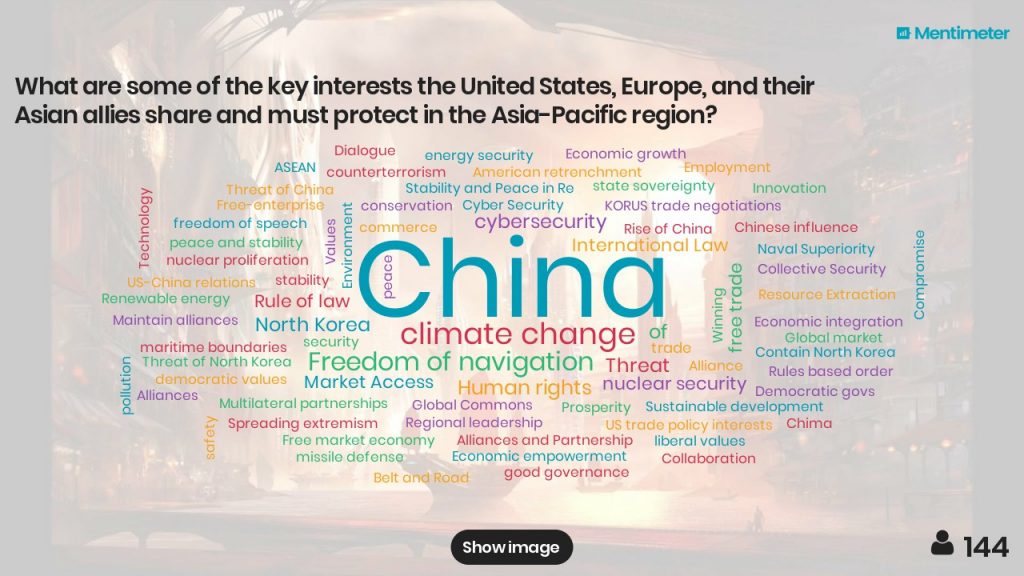 The Mentimeter word cloud, populated by the audience’s response to the question “What are some of the key interests the United States, Europe, and their Asian allies share and must protect in the Asia-Pacific region?”

The culmination of a full year of analysis by the Atlantic Council’s Asia-Pacific Strategy Task Force, A Strategy for the Trans-Pacific Century argues for deeper engagement between the United States’ Atlantic and Pacific partners to uphold the liberal rules-based order in Asia and beyond. As the rise of China creates reverberations felt not only within the Pacific region, but through the Atlantic as well, cooperation between these partners is needed now more than ever. Across Asia, Europe, and America, many nations share a common interest in protecting a rules-based order that has guaranteed more than half a century of freedom, prosperity, and growth. In their review of the task force’s findings, Dr. Matt Kroenig and Dr. Miyeon Oh, the paper’s co-authors, find that this cooperation cannot afford to take the form of either staunch resistance to change or acceptance of a bare-bones order. Instead, these partners must seek to reinvigorate the order by adapting it to a new global power dynamic, as articulated through a five-pillar strategy: strengthening security cooperation between regional allies; practicing hard-headed engagement with China; adapting the regional economic architecture for an open order; partnering to address the emerging issue areas of the 2020s; and promoting good governance, the rule of law, democracy, and universally recognized human rights.

To mark the paper’s launch, the Atlantic Council hosted a panel with co-authors Dr. Kroenig and Dr. Oh, who were joined by Ambassador Paula Dobriansky and Ambassador Ashok Mirpuri to discuss their thoughts on the future of the strategic order, grounding their comments in their individual regional perspectives from America and from Asia. In their opening remarks, all four panelists concurred on the overriding importance of US-China relations in the coming decades. Ambassador Mirpuri emphasized how China has gained power through its economic ascendancy, becoming the dominant trading partner of all Southeast Asian countries, while Ambassador Dobriansky agreed with Dr. Kroenig and Dr. Oh in asserting the need to strike a balance between cooperation and confrontation when dealing with China. The panelists also affirmed the need for strong partnerships in this new era, with Dr. Oh stressing the role of regional buy-in within Asia even as Ambassador Mirpuri highlighted the role of the US as a resident power of the Pacific, and the potential for tighter ties with Europe. As summed up by Ambassador Dobriansky, thinking around connectedness and alliances—whether informal or formal—must be central to forthcoming attempts to strengthen the foundation of the international rules-based order.

The panelists continued to build on these messages in the audience Q&A session, during which they covered a wide range of issues that spanned media coverage of the Asia-Pacific, the KORUS FTA, and the South China Sea. Two parallel themes emerged in this discussion, with one set of questions focusing on security and military strategy, and another set revolving around the economy and strategic trade. On security, Dr. Oh restated the need for the US and Trump to provide strong reassurances in the face of current challenges, with the hope that his coming trip to the region would encourage him to do so. On trade, the panelists echoed the paper on one of its main points, with Dr. Kroenig stating that they did not want to see the region divided into two Cold War blocs, but hoped to see Asia go beyond a zero-sum game. Ambassador Mirpuri likewise noted Singapore’s desire to see a balance in trade between the US and China, even as he underscored the role of US investment—not merely in terms of formal structures, but also in terms of US business presence. These questions were not strictly independent of each other: Ambassador Mirpuri noted that when discussing trade agreements, the Trump administration has focused on matters of economic benefit (or lack thereof), whereas their Asian counterparts have seen them as strategic agreements intended to anchor the US in the region. Both he and Ambassador Dobriansky agreed that a significant question facing policymakers was how to bring these economic and strategic imperatives together, stressing the paper’s premise that any future international order in the Asia-Pacific must be grounded in the preferences of countries in the region.

A Strategy for the Trans-Pacific Century is the twelfth volume in the Atlantic Council Strategy Papers series. The series is designed to enrich the public debate and build consensus on the great strategic challenges of our time, as well as to help shape strategic thinking in US and allied governments, the private and nonprofit sectors, and the global media. Check out all the volumes here.