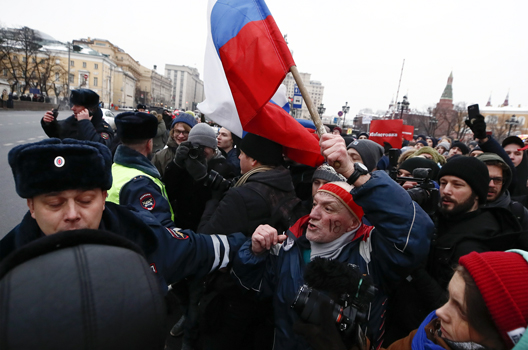 Russian Interior Ministry officers push people out of the traffic way during a rally, held by supporters of opposition leader Alexei Navalny for a boycott of a March 18 presidential election, in central Moscow, Russia January 28, 2018. (REUTERS/Maxim Shemetov)

On January 28, supporters of Russian opposition leader Alexey Navalny took to the streets across the country to call for a boycott of presidential elections planned for March 18. Organizers argued the election outcome remains pre-determined in favor of current President Vladimir Putin, who has been either president or prime minister since 1999.

Under the slogan “Забастовка” (translated from Russian: “strike”), Navalny’s supporters organized events in 115 Russian cities, together with Berlin, New York, and Prague.

Most of the media coverage, which was considerable, focused on events in Moscow, where Navalny himself was arrested. @DFRLab also tracked events across the immense spread of Russia, reaching from the far east to the west.