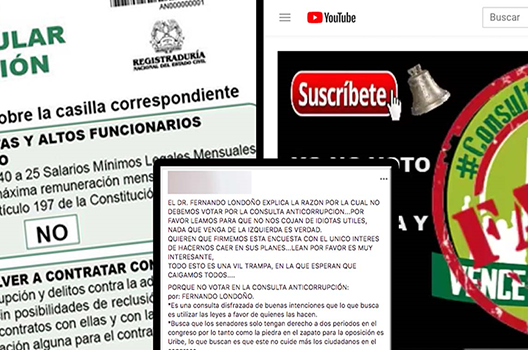 On Sunday, August 26, Colombians went to the polls again, this time to vote in a “popular consultation” on a series of seven initiatives intended to counter corruption. A significant share of the campaigning involved spreading misinformation  —  or countering it.

The consultation asked Colombians to vote on seven initiatives intended to crack down on Colombia’s endemic corruption. If approved, they would have strengthened punishment for convicted corrupt officials, improved the transparency of public offices and public contracts, imposed a maximum of three four-year periods for holding seats in public corporations  —  Congress, department assemblies (something like state legislatures in the United States), and city councils  —  and lowered the salary of Congress members and other high-ranking public officials.

The consultation was backed by both the president and the opposition, requiring a high turnout and a high vote to be approved, but failed to achieve the former. Disinformation aimed at suppressing the vote likely had a serious impact on the outcome.