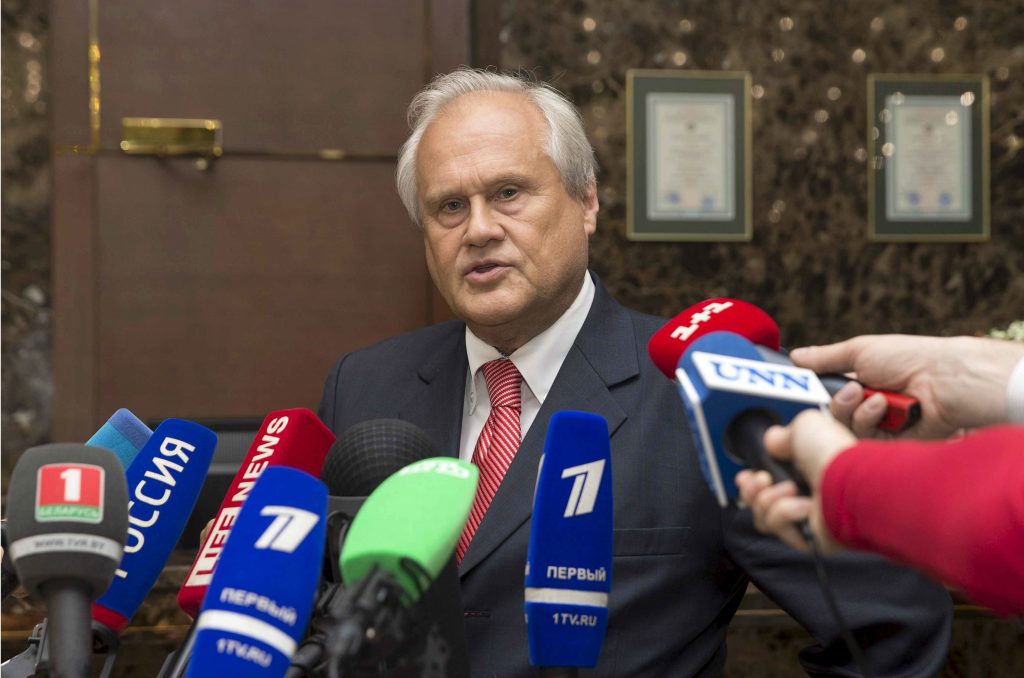 Austrian diplomat and Special Representative of the OSCE Martin Sajdik addresses the media after the meeting of the so-called Contact Group in Minsk, Belarus, July 7, 2015. REUTERS/Vasily Fedosenko

In the last year, there hasn’t been any new momentum in the effort to bring peace to Ukraine. Amid this long-lasting stalemate, the Austrian newspaper Kleine Zeitung recently published an interview with Martin Sajdik, special representative of the OSCE Chairperson-in-Office in the Trilateral Contact Group on Ukraine, under the ambitious title “We Have a New Plan to Solve the Ukraine Crisis,” that drew attention.

Sajdik stated the need for a new, legally binding, and more specific “comprehensive package” for implementation of the Minsk agreements. This would include deployment of the UN/OSCE mission in the Donbas, coordination with the UN and OSCE to hold local elections, placement of the UN transitional administration, and establishment of an EU-lead reconstruction agency for the Donbas.

These elements, which journalists have named the Sajdik Plan, are the highlights of a nineteen-page paper, “Joint UN/OSCE Mission to Eastern Ukraine,” which was disseminated among diplomats during the OSCE Ministerial Council in December 2018. It was recently published by the Ukrainian publication Liga.net.

The ideas are not new; they have been discussed in one form or another many times within the Normandy and Minsk negotiation formats. But so far, they have not been agreed upon by the negotiating parties. It is unclear why Sajdik chose to inform the general public about provisions in the document that were previously available only to a limited circle of diplomats and experts. Perhaps he wanted to show some progress in contrast to what appears to be a stalemate, or invite a broader discussion. He may even be aiming to put pressure on the negotiating parties to compromise. Regardless, the publication of the Sajdik plan has reinforced the point that the Minsk agreements remain unfulfilled and aspirational.

At first glance, recognition of the need to deploy a UN mission with military and civilian (including police) components seems to be a step forward. However, the proposed “relatively moderate size” of such a mission raises doubts about its ability to effectively promote the withdrawal of foreign troops and weapons. In the interview, Sajdik said that the joint UN/OSCE mission might be “modest,” consisting of fewer than 20,000 personnel. Given that international experts have estimated that the UN mission for the Donbas will require 20,000 troops and 4,000 policemen, the size of Sajdik’s proposal echoed Russian ideas about the need for a small-sized UN mission.

The Sajdik plan also calls for a UN Transitional Civil Administration that would supervise the implementation of the Minsk agreements in the Donbas. The idea of having an international administration is good, though its mandate is described in general terms that could lead to different interpretations. But the major concern is that the UN administration is mentioned after the provisions on local elections in the Donbas; in contrast, it is crucial to have such an administration launched before the elections, in order to prepare conditions for them.

The issue of local elections causes special concerns. Sajdik called local elections “the central element” of the Minsk agreements. This is disputable, because the restoration of peace and Ukraine’s territorial integrity is at least as important. Regardless, the elections should be free and fair, but that seems impossible under the rule of the present Kremlin-backed Donbas “authorities,” whose dissolution is envisaged in the Sajdik plan only after the elections. Besides, it is unclear from the document how the voices of the 1.7 million internally displaced persons would be counted, given that their return is envisaged only after the local elections.

The idea that leaders of the Normandy Four (Ukraine, Russia, Germany, and France) would sign a new, legally-binding, comprehensive package for the Minsk agreements’ implementation, with endorsement by their respective parliaments—as laid out in the Sajdik plan—also looks unrealistic. That’s especially true given that Russia continues to insist it is not a party to the conflict.

There are many other disputable points in the Sajdik plan that need further refinement, but the bottom line is this: the major obstacle to peace has nothing to do with the plan’s details. The main problem is the Kremlin’s unwillingness to end its aggression against Ukraine. Moscow still believes it can regain control over Ukraine through constant human and economic losses and, simultaneously, support for pro-Russian politicians.

Hoping for a new leader in Ukraine, Russian President Vladimir Putin has stated that it is meaningless for the Normandy Four to meet before Ukraine’s elections this year. However, the victory of openly pro-Russian candidates is unlikely. Given the public mood in Ukraine, none of the possible winners would dare suggest the country’s return to Moscow’s orbit—and this is the only thing that will appease the Kremlin.

Therefore, while not abandoning the search for effective ways to implement the Minsk agreements, the international community should focus its efforts on clear, consistent, and strict measures that could force Russia to respect the territorial integrity of its neighbors. Even the best peace plan will fail until the aggressor state decides that failure to comply costs too much.

And for that, much responsibility lies with the West. After all, the keys to peace are not only in Moscow, but also in those Western capitals who buy Russian oil and gas and provide Putin’s regime with enough money to fund military adventurism abroad.

Maksym Khylko is chairman of the board at the East European Security Research Initiative Foundation, a Kyiv-based think tank. He tweets @MaksymKhylko.