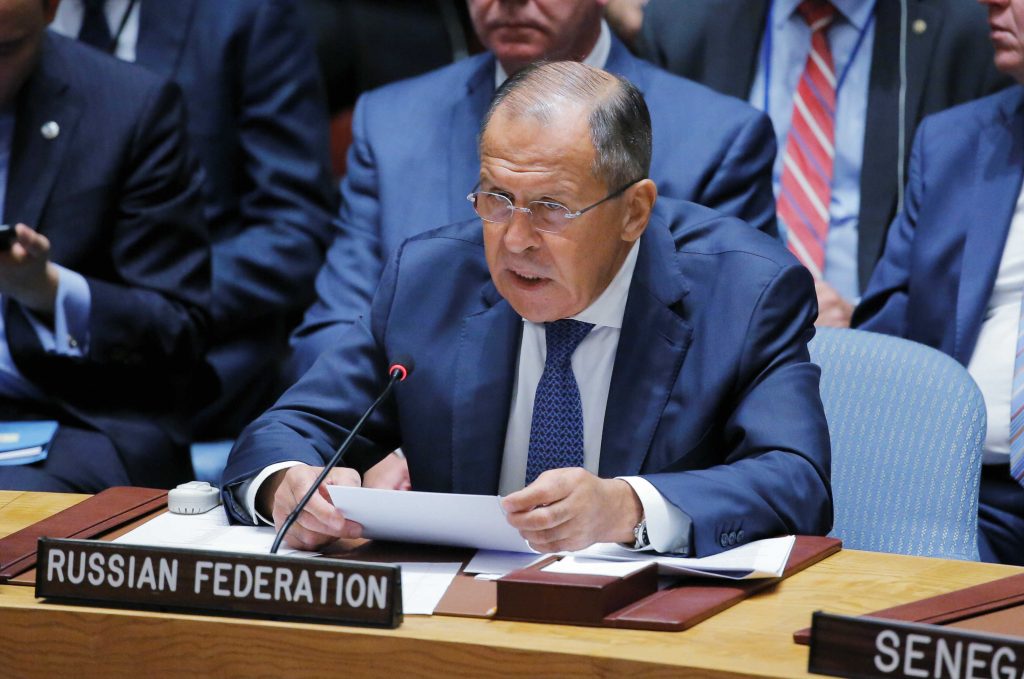 Russian President Vladimir Putin recently requested a UN peacekeeping mission for eastern Ukraine. While at home this looks like a peace overture, Putin is not motivated by the desire for amity.

The proposal is similar to Russian actions in Georgia prior to 2008, when it supported a UN observer mission in the Georgian-Abkhaz conflict zone and an OSCE mission in South Ossetia in addition to its own “peacekeeping” force. Rather than achieving lasting peace, these moves were a prelude to Russia cementing its presence in Georgia’s conflict regions.

In the Donbas, Russia is using military force to create a permanent unresolved conflict. The war is putting intense pressure on the government in Kyiv, sapping momentum from its efforts toward reform and Euro-Atlantic integration. But if and when Ukraine, Russia, and the Russian-backed separatists reach a durable ceasefire agreement, temporary respite is all it will be.

Kyiv and the West should expect a second phase of the conflict. That lesson can be learned from Georgia, the object of Russia’s 2008 invasion and theater of a war that never truly ended.

In Georgia, Russia has shifted from the tactics of blunt force to those of subversion. These tactics involve the “borderization” of Georgia’s territory: the installation of border markers, fencing, and barbed wire along the boundary lines that separate Georgia’s occupied territories from the rest of the country. The process started shortly after the war but has increased in intensity since 2013. In several incidents, Russian soldiers and ethnic Ossetian militia have moved the boundary lines deeper into Georgia.

By building physical barriers, Russia is giving permanence to Abkhaz and Ossetian separatism while exposing the weakness of the Georgian state. This sews public doubt about the viability of a European future.

As Ukraine and its allies ponder new peacekeeping formats, one should remember that the presence of peacekeepers did not stop Russia’s invasion of Georgia in 2008. Nor has the presence of the European Union Monitoring Mission stopped Russia’s creeping annexation and occupation of Georgian territory since then.

It’s unlikely that Ukraine would fare better from a similar arrangement. Moscow is pushing for a narrow UN peacekeeping mandate that would exclude the Ukraine-Russia border, which would give Russia unrestricted access to the Donbas. Such an outcome would mirror the situation in Abkhazia and South Ossetia.

Russia will insist that any ceasefire arrangement secures it permanent veto power over Ukraine, as it did with Georgia. Once the hot phase of the war ends, Russia will likely work to erode Ukraine’s sovereignty using methods similar, although not identical, to those it is employing in Georgia.

For one, that would mean continuing to campaign for international recognition of Crimea, as it has lobbied for recognition of Abkhazia and South Ossetia as sovereign states. Russia hasn’t had much success in the latter cases, but Crimea could be different. When Russia found it could not break Brussels’ common position on Crimea, it appealed to European parties and politicians.

Marine Le Pen, the runner-up in this year’s French presidential election, claimed to “regret that the referendum was not recognized by the international community.” Christian Lindner, leader of the German Liberal Party—a likely member of Germany’s next ruling coalition—has also called for a softer stance on the Crimea issue, although not official recognition.

Second, Russia could pursue a policy of de facto annexation of the Donbas, giving it effective control over the territory but avoiding the international backlash that would follow outright annexation. Strengthening its military presence there would give it a permanent base for subverting the government in Kyiv. Russia has continually done so in Abkhazia and South Ossetia, signing agreements on “alliance and integration” in 2014 and 2015, respectively.

Taken in sum, these measures would mark the second phase of Russia’s war against Ukraine. Like in Georgia, Russia will use non-violent means to exert pressure on the government in Kyiv, with the ultimate goal of derailing the country’s Euro-Atlantic integration.

Ukraine and its Western partners must not repeat the mistakes of the Russo-Georgian conflict. For starters, sanctions in response to Russia’s illegal annexation of Crimea must be maintained, even if a lasting ceasefire finally holds in the Donbas.

Russia is not an honest broker in any post-Soviet conflict. Therefore, responsibility for maintaining peace in the Donbas must not be placed with international institutions over which Moscow has veto power. Russia previously blocked continuation of the United Nations Observer Mission in Georgia and OSCE mandates that covered Georgia’s conflict regions. An EU-led peacekeeping force would be the best option. To avoid a re-run of what has happened in Georgia, any peacekeeping arrangement must also cover the Ukraine-Russia border.

Moreover, there cannot be daylight between the positions of Washington and European capitals on Crimea. Russia appears to have better prospects for success in Crimea than in Abkhazia and South Ossetia, given local circumstances and the readiness of some Western European political parties to accommodate Russia’s geopolitical interests there. Western governments—especially in France, Germany, and the United States—should lock in sanctions against Russia while they have the legislative power to do so.

In short, Ukraine and its partners must ensure that Russia doesn’t get a free hand in the Donbas. That means maintaining unified positions on peacekeepers, sanctions, and the non-recognition of Crimea. Georgia knows all too well the price to pay for getting these things wrong.