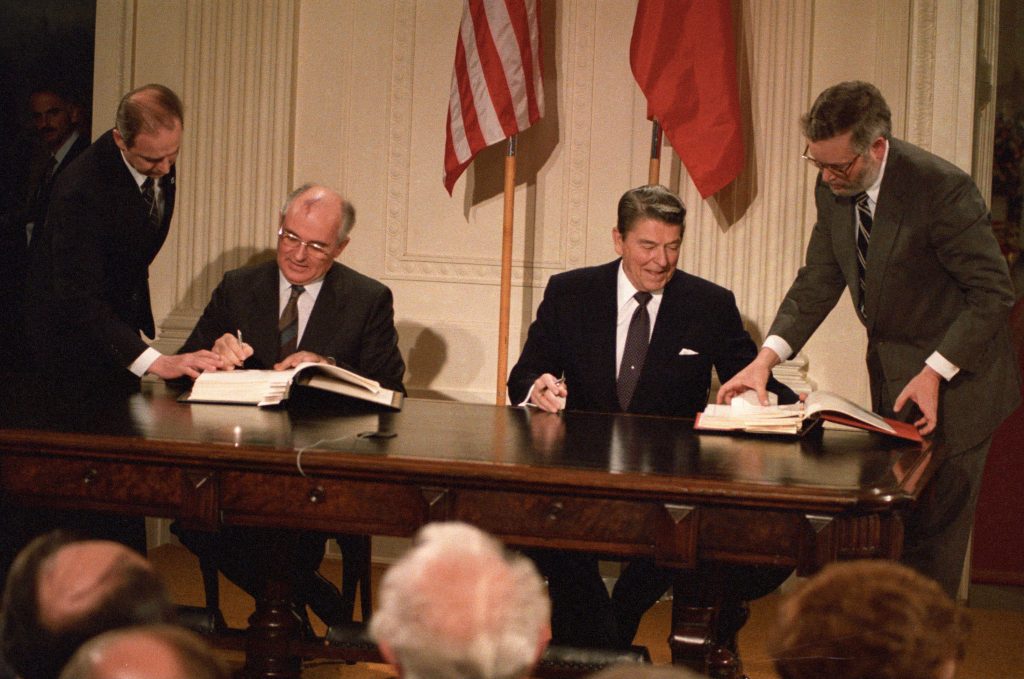 On February 1, Secretary of State Mike Pompeo announced that the United States would suspend its obligations under the 1987 Intermediate-range Nuclear Forces (INF) Treaty. Pompeo said Russia had violated the treaty for years. The next day, the State Department notified the Russian embassy and the embassies of the other treaty parties, including Ukraine, of the US intention to withdraw from the treaty. President Vladimir Putin that same day said that Russia also would suspend its treaty obligations.

Unfortunately, the INF Treaty is headed for demise.

Signed by Ronald Reagan and Mikhail Gorbachev in 1987, the INF Treaty banned the United States and Soviet Union from having land-based missiles with ranges between 500 and 5,500 kilometers. “Intermediate-range nuclear forces” is something of misnomer, since the treaty does not constrain “nuclear” forces; it bans land-based intermediate-range missiles—regardless of whether they are nuclear or conventionally armed.

The treaty entered into force in June 1988. By June 1991, the United States and Soviet Union had destroyed their inventories, which totaled nearly 2,700 missiles. In December 1991, the Soviet Union collapsed.

The United States and Russia, however, are not the only parties to the agreement. Eleven other post-Soviet states became successors to the Soviet Union for purposes of the INF Treaty, including Ukraine. (The three Baltic states, which considered their incorporation into the Soviet Union illegal and which had regained independence earlier in 1991, did not).

In like manner in the 1992 Lisbon Protocol, Russia, Belarus, Kazakhstan and Ukraine took on the Soviet Union’s treaty commitments under the 1991 Strategic Arms Reduction Treaty (START I).  The latter three countries further committed to eliminate all strategic offensive arms on their territory and to accede to the 1970 Non-Proliferation Treaty as non-nuclear weapon states.

What does this short diplomatic history mean for Ukraine? With the United States and Russia no longer subject to the INF Treaty’s limits, it would be hard to argue that Ukraine and the other states should remain constrained by the agreement. If Kyiv chooses, it can invoke the same treaty right to withdraw that Washington exercised two weeks ago.

Ukraine would remain bound by other agreements. The Non-Proliferation Treaty bars it from acquiring nuclear weapons. Under the terms of the 1987 Missile Technology Control Regime, Ukraine has committed to restrict exports of missiles that can carry a 500-kilogram warhead to ranges of 300 kilometers or more.

START I lapsed in 2009 and was replaced by the 2010 New START Treaty, a bilateral US-Russian agreement. One might argue that Ukraine carried out its commitment made at the time of the Lisbon Protocol to eliminate all strategic arms on its territory but did not commit to never acquire them in the future. An attempt to build intercontinental ballistic missiles (ICBMs), however, would undoubtedly meet strong opposition from the United States, whose ICBMs and other strategic arms are limited by New START.

Land-based intermediate-range missiles, however, pose a different question. The US government would have no legal grounds to object if Ukraine were to withdraw from the INF Treaty, since Kyiv would only be following Washington’s lead. Moreover, given ongoing Russian aggression against Ukraine, the US government would have little basis for complaint if Kyiv concluded that intermediate-range missiles could contribute to its capability to deter further Russian hostilities—provided that those missiles were armed with conventional, not nuclear, warheads.

Others might object. Russia certainly would, but Moscow has violated the 1994 Budapest Memorandum on Security Assurances, used military force to illegally annex Crimea, invaded the Donbas, violated the INF Treaty by deploying a prohibited intermediate-range cruise missile which can target Ukraine as well as other countries in Europe, and suspended its obligations under the treaty. Kyiv could be forgiven for giving any Russian complaints short shrift.

This is not necessarily to advocate that Ukraine proceed to develop and deploy land-based intermediate-range missiles. The Ukrainian government would have to assess a host of political, military, and cost factors, including weighing the potential military benefits of having such missiles against the blowback from Moscow and possibly some European states. But if Kyiv decides to withdraw from the INF Treaty and consider building its own intermediate-range missiles, it should be able to do so without fearing or facing a negative reaction from the United States.

Steven Pifer is a William Perry fellow at Stanford’s Center for International Security and Cooperation and a nonresident senior fellow at the Brookings Institution. He served as US Ambassador to Ukraine from 1998 to 2000.