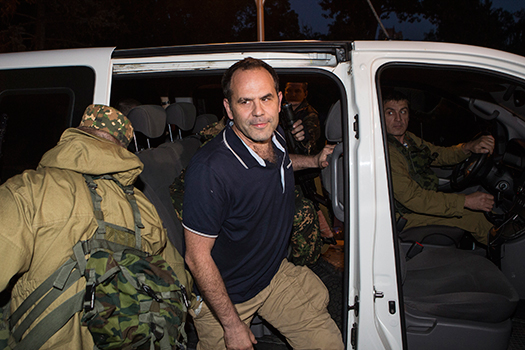 An unidentified member of OSCE Special Monitoring Mission in Ukraine walks out of a bus on arrival in the city of Donetsk after been released from captivity, June 28, 2014. REUTERS/Shamil Zhumatov

Russian-backed militants in Ukraine have detained (and ultimately released) three varied teams monitoring the crisis there under the aegis of the Organization for Security and Cooperation in Europe. Security threats to the monitors, including those detentions, are hampering the work of the OSCE in its role as the main international body observing and mediating in the Russia-Ukraine crisis, says US Ambassador Daniel Baer.

The monitors are part of a 300-strong OSCE delegation whose job is to observe compliance with an agreement in April among the European Union, the US, Russia and Ukraine aimed at resolving the conflict in Ukraine’s southeastern provinces of Donetsk and Luhansk. The two monitoring teams taken captive recently were freed on June 27 and 28. Two months earlier, a military mission was taken captive by a separatist group in Slaviansk in Donetsk province, and freed after eight days.

“Because of security concerns, the monitoring mission is not able to fulfill its full mandate, which is to cover all the territory of Ukraine,” Baer said in a video interview at the Atlantic Council. OSCE teams are denied access to parts of eastern Ukraine, and also to Crimea, said Baer, who serves as the US envoy to the OSCE, headquartered in Vienna.

In the interview, Baer discussed the protracted, “frozen” conflicts – such as those in Georgia and Moldova – that remain among Europe’s most difficult security problems. Russian involvement is the “common thread” in many of these, he said.

As Russia backs separatist militants in southeastern Ukraine, it has used its control over most of Russian mass media to foment the conflict, Baer said. As it does so, Russia also is suppressing dissent and public discourse at home.

The “frozen conflicts” in areas where Russia is trying to dominate its ex-Soviet neighbors leave the disputed regions “frozen” as well, economically and societally, Baer said. Residents of internationally unrecognized, Russian-backed proto-states such as Transnistria in Moldova are often locked within their territories, unable to travel, and limited in their contacts with the outside world.