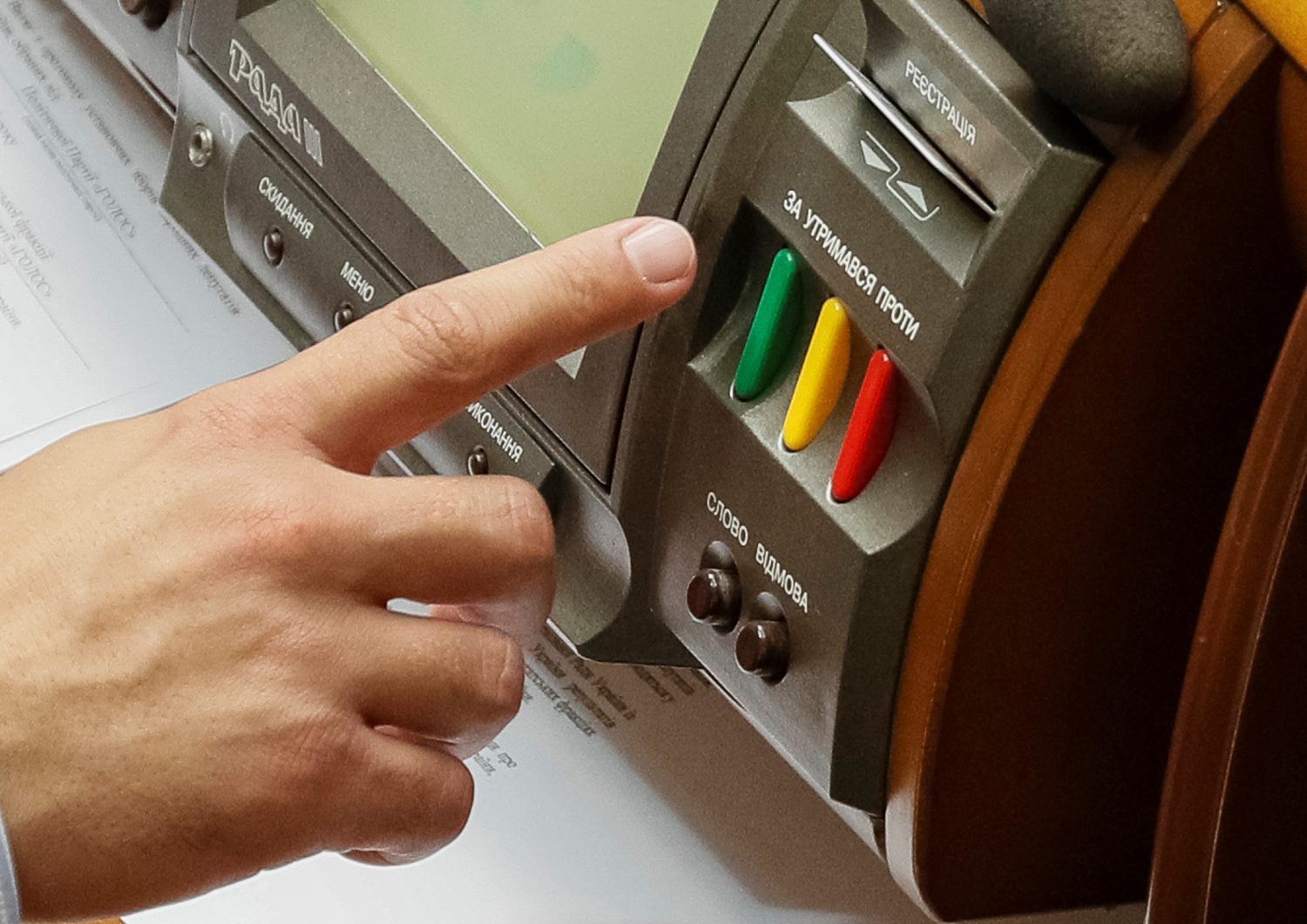 A Ukrainian lawmaker votes in the first session of the newly-elected Ukrainian parliament on August 29, 2019. President Zelenskyy's one-party majority has led to a "turbo-charged" legislature, creating new challenges and opportunities for the country. REUTERS/Gleb Garanich

It has been a bustling and profitable year for international companies working in Ukraine. 88% of American Chamber of Commerce member companies reported increased revenues in 2019, while 65% of our 600 members plan to increase their investments in Ukraine over the next 12 months, according to our latest membership survey. These positive indicators are one of the reasons why the current business climate is cautiously optimistic. However, concerns remain that the Ukrainian authorities could yet spoil this positive picture during the coming year.

We are now coming to the end of a remarkable twelve months in Ukraine packed with events that have kept the country’s politicians exceedingly busy. Ukraine held a high-profile presidential election followed by summer elections to parliament. This led to the appointment of a young new government. Parliament hit the ground running, and was soon being referred to as “turbo-charged” due to the speed with which it began adopting new legislation.

Both President Zelenskyy and Prime Minister Honcharuk have wasted no time in demonstrating a business-friendly approach. The President has been amenable to hear the voice of business, meeting business community representatives even before he was elected. The PM has gone even further, inviting me together with two other heads of leading business associations to sit in on weekly government cabinet meetings. This engagement is encouraging, as is the new government’s vision for the future development of the Ukrainian economy. Soon after his appointment, PM Honcharuk demonstrated the scale of his ambition when he announced a plan to attract $50 billion in foreign direct investment and achieve 40% GDP growth by 2024. No wonder new investors are eyeing Ukraine and trying to understand the opportunities it represents.

What could possibly go wrong? Although the current business sentiment is certainly upbeat, I am getting signals that the mood could quickly turn sour. As we enter the New Year period, we are closely monitoring a number of key issues that risk sending dangerous signals to the international business community.

All eyes are currently on the National Bank of Ukraine (NBU) and its ability to maintain its independence from external vested interests. Ongoing rent-a-crowd demonstrations convening outside the bank and, more distressingly, outside the homes of NBU management, are proof that the central bank is disrupting vested interests. Once a year, at Thanksgiving, we ask our members who they would like to thank most for making Ukraine a better place to do business. This year’s choice was unanimous: we presented the 2019 Thanksgiving Award of the Business Community to Ukraine’s National Bank. The NBU is on the right track and should continue to be supported.

Investment in Ukraine’s green energy sector has been booming over the past couple of years, attracting more than US $4 billion. The government now threatens to throw a spanner in the works and pull the plug on wind and solar renewable energy projects by introducing retrospective changes to existing legislation. If this proves to be the case, potential international arbitration and litigation will severely damage Ukraine’s investment appeal.

The manner in which laws are made is also an issue. With things moving so speedily in the country’s turbo-charged parliament, MPs can amend texts of draft laws at the very last minute, introducing unexpected modifications to legislation. We have already seen such examples with new legislation on excisable goods, including mind-boggling last-minute changes introduced targeting tobacco retailers. Such actions are disappointing and should be closely monitored.

IT is Ukraine’s fastest-growing export sector. The government should think twice before introducing any short-term fiscal measures that may devastate the industry in the long run. Ukraine’s flourishing agriculture sector is also doing well, with Ukraine number one in the world for sunflower oil and seed production. However, logistical issues relating to the country’s railways continue to hamper seamless delivery from field to fork.

While these issues give the business community cause for concern, there is also plenty of confidence as we look ahead to the coming year. In 2020, I look forward to the long-awaited opening of the first McDonald’s restaurant at Boryspil International Airport. The golden arches, along with other restaurant chains, have been kept out of Ukraine’s busiest airport for years. The new McDonald’s at Boryspil will serve as one more visible and tangible example of how things are changing in Ukraine.

Ukraine remains attractive to investors due to its talents, labor costs, and considerable access to European markets. Confidence in the authorities among the business community is also relatively high. According to our recent survey, 84% of members believe the Ukrainian state authorities are committed to further opening up the domestic market to foreign investment.

Thomas L. Friedman, the American political commentator and author, says that while pessimists are usually right and optimists are usually wrong, all great changes have been accomplished by optimists. Ukraine could perhaps learn from this observation as the country approaches what promises to be another vital year. While there are certainly reasons for pessimism, we hope the optimism of the new government will translate into policies that match the business community’s own optimistic mood and bring about positive change.

In general, it seems that Zelenskyy believes all complex issues have simple solutions.

Ukraine’s new judicial reform is not ideal but urgent and long-awaited.