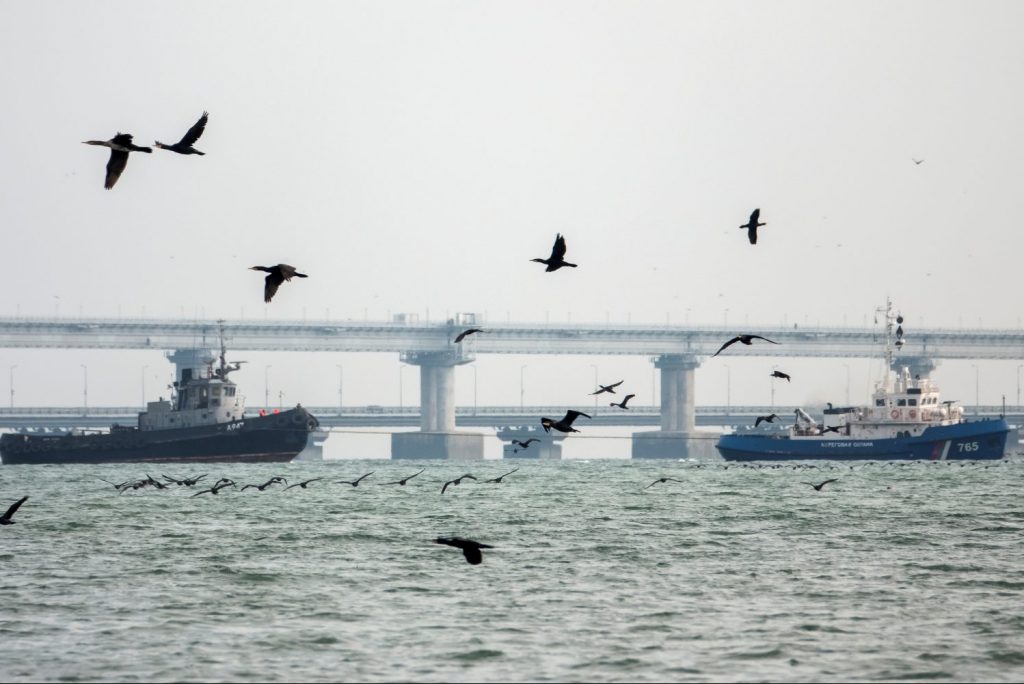 A seized Ukrainian ship is towed by a Russian Coast Guard vessel out of the port in Kerch, near the bridge connecting the Russian mainland with the Crimean Peninsula. November 17, 2019. REUTERS/Alla Dmitrieva

After 358 days, three captured Ukrainian ships were finally released by the Russian government on November 19. The ships’ fate has been a major point of contention as the Ukrainian and Russian presidents prepare to meet for the first time in Paris next month.

Two gunboats, the Berdyansk and Nikopol, and the tugboat Yana Kapa, were seized along with twenty-four Ukrainian sailors by Russia’s Federal Security Service (FSB) in a November 2018 attack widely seen as a violation of international law. The return of these boats to Ukrainian custody was met with glowing praise from French President Emmanuel Macron, who, following a call with Russian President Vladimir Putin, said the move strengthened “the trust in the dialogue between Russia and Ukraine.”

With the Normandy Four summit now confirmed with the leaders of Ukraine, Russia, France, and Germany on December 9 in Paris, the timing of the release is noteworthy.

“The release of the three Ukrainian ships involved in last year’s Kerch Strait incident was likely timed to demonstrate a constructive stance on Moscow’s part prior to the Normandy Format meeting,” said Alexander Vershbow, the former US ambassador to Russia and a distinguished fellow at the Atlantic Council’s Scowcroft Center. “This is standard practice aimed at putting the onus on Kyiv to make the majority of the concessions in the negotiations to end Russia’s undeclared war in the Donbas.”

Indeed, coverage in Western outlets has largely followed this pattern, often taking the Kremlin’s stance at face value with little context. The Telegraph called the move “an apparent bid to ease tensions” with Ukraine. The New York Times leads its coverage by noting that the return is “something Kyiv wanted to happen before a four-way peace summit on eastern Ukraine next month in Paris.”

The press forgot something significant in its coverage. Yes, Ukraine has been calling for the return of these ships for months, and yes their status would have been a serious obstacle to peace talks, but the ships were illegally fired upon and seized while legally traveling in what should have been safe waters. The 2018 attack so worried the Ukrainian government that it declared martial law for thirty days and barred the entry of all Russian men, fearing the formation of Russian militias ready to pave the way for a military invasion.

The Kremlin violated international law by attacking a sovereign nation in one of the most brazen challenges to the rules-based international order seen in years. Then Moscow had the chutzpah to ignore the May ruling of the International Tribunal for the Law of the Sea (ITLOS) that ordered the Russian government to return the captured sailors and vessels. In September, the twenty-four Ukrainian sailors, held hostage for ten months, were returned in a large prisoner swap—but Moscow decided to hold on to the ships.

So, congratulating it for returning what was illegally seized is a hard case to make.

Even so, Russia appears to be moving into the December 9 Normandy Four summit with a strong hand. Not only can it point to its return of the ships and soldiers as signs of goodwill and examples of recent concessions, it appears to have softened up France and Germany.

Macron has spent the last few months on a veritable pro-Russia public relations campaign, saying in August that the West’s alienation of Russia was “a profound strategic mistake.” In September, he sent his foreign and defense ministers to Moscow, ending a four-freeze on high-level visits originally imposed in response to Russia’s invasion of Ukraine.

Germany, meanwhile, seems torn. Chancellor Angela Merkel told The Guardian in May that Germany and the European Union needed to stand up to Russia, but her numbered days in office soften what punch this may have had in the past.

Other German leaders are positioning themselves closer to Macron. “The time has come for the German government to pressure the EU for a partial lifting of the sanctions [on Russia],” longtime Christian Social Union politician Peter Ramsauer told Reuters.

Normally, Ukraine would be able to count on seasoned US diplomats, dedicated to advocating for mutual Ukrainian and US interests, to support Zelenskyy’s team behind the scenes when going into a major summit like this one. But as impeachment sucks up all the oxygen in Washington, newly vacant posts like that of special-envoy Kurt Volker remain unfilled—and Zelenskyy’s kowtowing to US President Donald Trump in recently released phone call memos doesn’t inspire confidence in his negotiation skills.

Zelenskyy was elected on a promise to end the war with Russia, and he’s taken serious heat for trying to deliver. Agreeing to the “Steinmeier Formula,” a map for how to end the fighting in eastern Ukraine, elicited some of the largest protests since the Euromaidan revolution.

Will the long-awaited return of the Berdyansk, Nikopol, and Yana Kapa end up being a Russian tool to strongarm Ukraine into further concessions at the Normandy Summit? Let’s hope that the French see through the insincere gestures and Zelenskyy stands his ground.

Doug Klain is a project assistant with the Atlantic Council’s Eurasia Center and Democratic Order Initiative. He tweets @KlainGame.