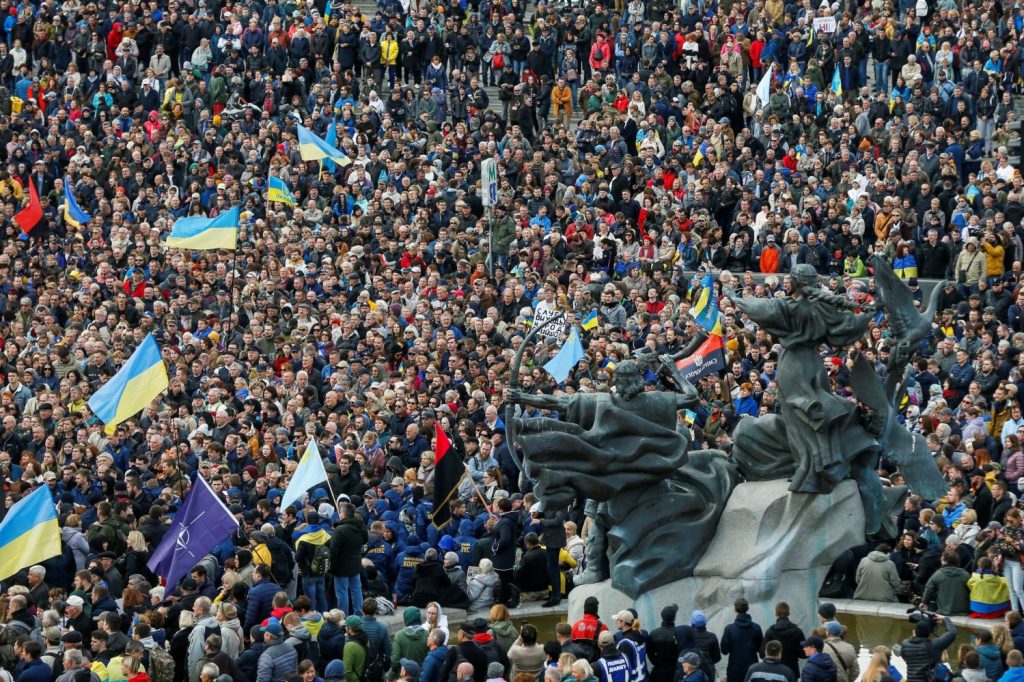 People attend a rally against the approval of the so-called Steinmeier Formula, in Kyiv, Ukraine October 6, 2019. REUTERS/Valentyn Ogirenko

Yesterday, thousands marched in Kyiv and twenty other cities across Ukraine to protest that other Ukraine controversy that just won’t go away. On October 1, Ukraine’s president signed the Steinmeier Formula, a framework for eventually holding elections in Ukraine’s occupied east and giving them special status, which many are convinced will lead to Ukraine’s dismemberment.

After signing the Steinmeier Formula, Ukraine woke up with two eternal questions: what to do and who to blame? Some also started questioning where to emigrate. The problem is not in the Steinmeier Formula itself, which we still only partly know. The problem is that Ukrainians still have not reached a compromise on what to do with the Donbas. So now there are only two solutions—to lose the country or to lose the Donbas.

Ukraine stands between two conflict resolution formulas: to freeze the Donbas or to try and integrate it. To freeze the Donbas means to ignore the conflict potentially for several more decades. Fence off the border, stabilize and improve the economy through social programs, and strengthen the military. The idea behind this is that Russian President Vladimir Putin’s regime will eventually fall and by that time Ukraine will be strong enough to reclaim its territories. There are some problems with this line of thinking. Even if Ukraine successfully reforms itself, this will not necessarily facilitate conflict resolution. Look at South Korea. Germany, which had been divided since 1945, however, ultimately was able to reunite and continue to subsist as a strong state and as a single nation. We are unlikely to follow the path Germany chose. Instead, we should expect a far worse option. Look to Ukraine’s western border to see how things will likely play out.

Regrettably, we will have another Transnistria, the crime-ridden no-man’s land between Moldova and Ukraine, bordering the Russian Federation on Ukraine’s eastern border as well. Russia will continue to wage war with us through the eastern territories using any suitable pretext.

The second way is to reintegrate the Donbas. Unfortunately, we don’t understand under which conditions and what exactly we have agreed upon with Russia. This is why thousands are still protesting days after Zelenskyy signed on.

Another problem is the way Ukrainians learned about the agreement. Russia publications broke the news. We saw the document signed by former president Leonid Kuchma in Kommersant, a Russian publication, and the Russian information agency TASS was the first to deliver the news. Why didn’t Zelenskyy’s office inform its citizens first? The president hastily arranged a press conference at the end of the day, which clarified little and angered many.

First, we should rightfully describe the formula for what it is. It’s not Steinmeier’s Formula, it’s Putin’s formula. Steinmeier suggested it years ago when the ceasefire agreement was stuck and the diplomatic community forgot about it. The Russians dusted it off and have been pushing it for months. The bottom line is that Ukraine has agreed to comply with the creation of an enclave on the territory of Ukraine.

The biggest and most objectionable issue is that the conditions of Donbas integration were forced upon us, not in the fact that we will provide special status to the Donetsk and Luhansk regions.

We are most likely responsible to rebuild these territories, which is outrageous. Russia has been waging war there for more than five years, ravaged the cities, destroyed the infrastructure, reallocated the industrial capacities on its territory, and now Ukraine will have to restore the Donbas at its own expense. This is not only economically difficult but simply impossible. Besides the costs, there will be other controversies able to tear Ukrainian society apart, such as how to accept the monument to Motorola—a Russian citizen who led the Sparta Battalion, which includes some of the militants fighting the Ukrainian army in the Donbas—for example.

With the Donbas, we not only get Putin’s enclave inside our country, but we also give him a permanent place from which he will rule over the country. Ukraine’s keys are in the Donbas and they will be in Putin’s hands. Ukraine will be stuck in a permanent crisis that will revolve around the perpetual problems of the status of the official language and NATO membership.

We should begin with some common truths. If we think Putin will return the Donbas on a silver platter, we are either idiots or mere amateurs. The first is more likely. Putin wants to avoid a stable Ukraine, which obviously will focus on returning Crimea after getting the Donbas back. Putin needs an incessant crisis and destabilization. Neither peace nor war. He wants sanctions lifted and to block Ukraine from joining the EU and/or NATO. This why Steinmeier’s Formula is Putin’s formula and Putin has never been happier. Our question is whether we will be able to turn it into a Ukrainian formula and whether we as a society will find a compromise to resolving the future of the Donbas before its too late.

Oleksiy Goncharenko is a Ukrainian lawmaker with the European Solidarity party.

Is Ukraine about to be sold out and further weakened by internal splits?