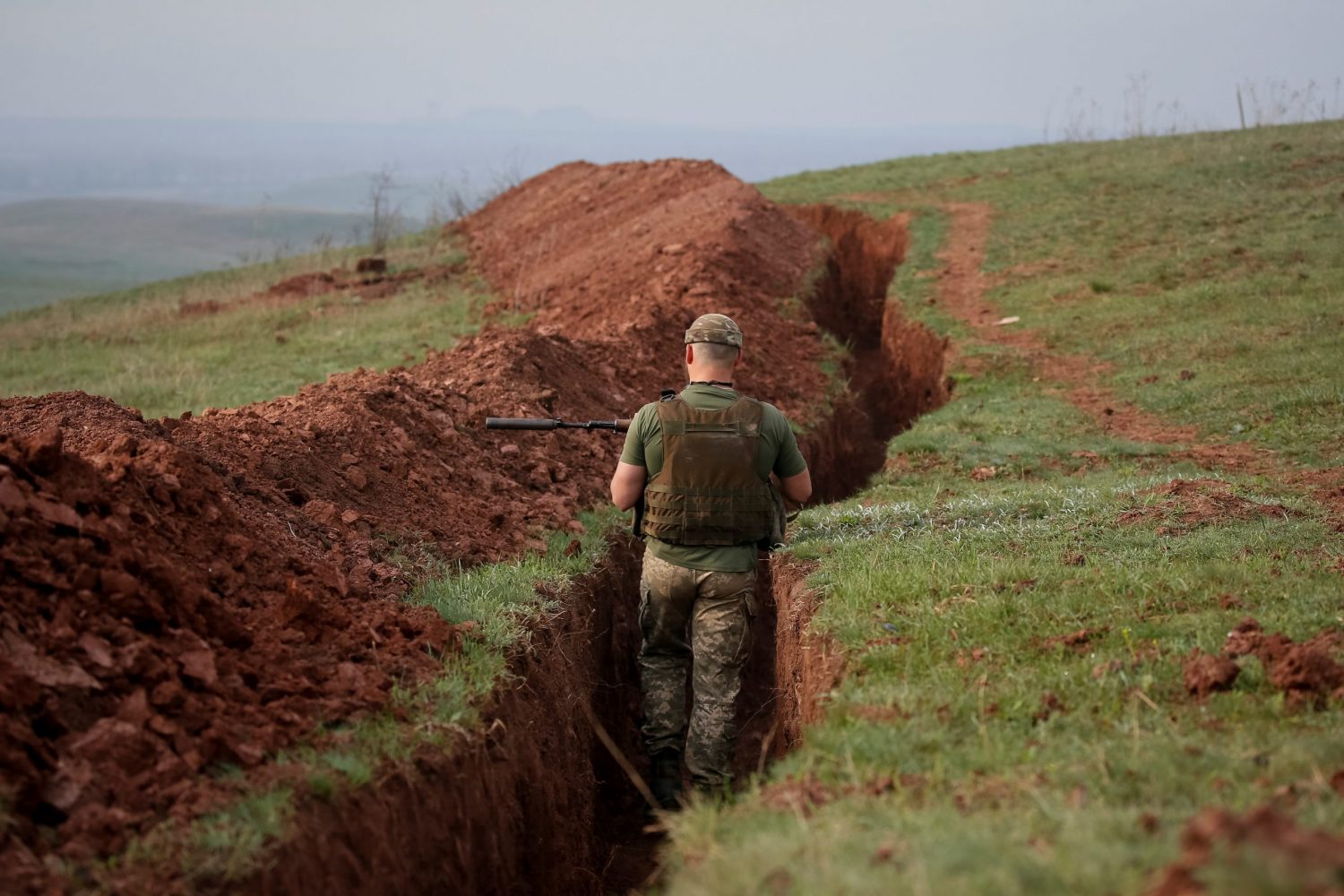 A Ukrainian serviceman walks along a trench at a position on the front line near the city of Svitlodarsk in Donetsk region, Ukraine April 12, 2019. Picture taken April 12, 2019. REUTERS/Gleb Garanich

The undeclared war between Russia and Ukraine will enter its seventh year in 2020 with no end in sight to a conflict that has shattered the security assumptions of the post-1991 world. While fighting is now sporadic along the largely static frontlines, Kremlin-commanded forces still occupy much of eastern Ukraine and the death toll continues to mount. Many hoped the spring 2019 election of Volodymyr Zelenskyy as Ukraine’s new president would end the deadlock. However, Zelenskyy’s highly anticipated first face-to-face meeting with Vladimir Putin in December failed to produce any breakthroughs. Instead, it merely served to underline the distance between the rival Russian and Ukrainian visions for a post-conflict settlement. Nevertheless, both sides have committed to continuing negotiations during the coming year. What are the prospects for peace in 2020?

The prospects for peace in 2020 are dim because President Putin remains determined to regain control of Ukraine and its geopolitical orientation. It’s rather naive to hold out hope that Putin will shift his position on this key foreign policy goal as a result of weak US and European sanctions pressure, particularly as leading European politicians like Germany’s Angela Merkel or France’s Emmanuel Macron seek to court Russia with major economic development prospects.

The more determined we are to secure peace in Ukraine, the more elusive it will be. The reason for this is that Ukraine matters more to Russia than anything except Russia itself. Since 2014, Russia has used hard power to show that it will not be dislodged except on its own unacceptable terms: a veto over Ukraine’s foreign policy and an institutionalized role in its internal affairs. It also has prosecuted a war of narratives and stealth to make these terms acceptable. The costs that Russia has incurred through this policy are worse than appearances suggest, but they are bearable and will continue to be borne as long as the Kremlin believes its terms are achievable. Nevertheless, the Normandy summit on December 9 demonstrated that compromise need not be grist to the Kremlin’s mill. In essence, there were no surprises, but Zelenskyy subtly changed the algorithm, and the Russians were plainly discomfited. First, on matters of cardinal importance, namely Ukraine’s constitution, elections and “special status”, he ceded no ground. Moreover, he boldly stated that the Minsk provisions on the border would not satisfy Ukraine and, in this, secured indirect backing from Angela Merkel. Third, in the most public manner possible, he articulated Ukraine’s own red lines while making sure his partners and domestic opponents, as well as the Russians themselves, understood that the Ukrainian people would not tolerate anything less. The meaning of the summit is not that peace is at hand, but that a shabby surrender is no longer in prospect. The Kremlin will think carefully before raising the stakes. That it will do so is more likely than not.

If you have read any of the daily reports of the OSCE’s Special Monitoring Mission to Ukraine since the Normandy summit in Paris, you cannot be blamed for being pessimistic towards the prospects for peace in eastern Ukraine. Not only have the daily ceasefire violations stayed at quite a high level, OSCE observers have also reported violations within the three pilot disengagement zones. In addition, since the morning of the summit, more Ukrainian servicemen have been killed or injured. The four Paris summiteers agreed to establish three more disengagement zones in the weeks ahead, but if the current ones are not respected, then what is the use? My biggest concern is that Russian President Vladimir Putin will continue to press for elections in the occupied territories without giving way to Ukrainian demands that the Russian-backed rebels withdraw first, and that Ukraine regains control over its border with Russia. These are red lines established by popular sentiment in Ukraine and which President Volodymyr Zelenskyy knows full well he cannot violate. As for US backing, Ukraine will have to go it alone for a while, as Washington is distracted by the impeachment proceedings and a scandalized Donald Trump is very much focused on re-election.

I see a long war ahead, unfortunately, until Russia and Vladimir Putin start accepting that Ukraine is an independent nation that can chart its own course in this world. The only upside is that, with each year of the Kremlin’s war, Ukraine moves further from Russia and closer to the West.

The traditional end-of-year Putin press marathon did not bring anything new. More than five years since the outbreak of hostilities, he was open about his objectives. The Russian leader still doesn’t recognize Ukraine as a fully independent state, while his preconditions for peace remain incompatible with Ukrainian sovereignty. This does not give much hope for an end to the conflict in 2020. On the contrary, Putin is quite satisfied with the status quo, and is eagerly anticipating further favorable changes in the geopolitical landscape. He believes time is on his side, with Europe growing tired of the war and EU leaders eager to see it disappear altogether from the international arena. Rather than bringing peace, the coming year is more likely to offer further fighting and more casualties. Following a brief lull in the wake of President Zelenskyy’s election victory, there are now indications of a fresh information offensive across all major Russian media platforms. While a preoccupation with Ukraine is nothing new for the Russian media, we are currently seeing the reemergence of a strong “failed state” narrative depicting Ukraine as a country overrun by far-right groups and slipping beyond the control of a weak president. Messages of Ukrainian religious and linguistic division are also enjoying renewed prominence. This rising tide of hostile media coverage is ominous because it can only be part of a broader strategy. In other words, while Ukraine is stuck in futile negotiations for an elusive peace, Russia may be preparing the ground for a fresh escalation. With this in mind, Ukraine must be prepared to defend itself in 2020, this time with less international support and more external pressure to capitulate.

As Ukraine enters the first full calendar year under a new president, the worst fears of some patriotic Ukrainians of a wholesale capitulation to Russia have not materialized. Departing Paris, President Zelenskyy left his Russian counterpart reportedly seething over a pointless trip, having failed to squeeze out any of the major concessions he had sought. Knowing Putin’s modus operandi, it would be reasonable to assume he will not take this snub lying down. Instead, he may feel that a fresh escalation in eastern Ukraine would strengthen his position ahead of the next round of talks, whether these talks take place in spring 2020 as scheduled or later in the year. The Russian leader himself is unlikely to be in a rush. Despite regular predictions of his imminent demise, Putin knows that he ultimately has a much stronger hand than his inexperienced Ukrainian colleague. Zelenskyy may enjoy unprecedented control over all branches of the Ukrainian government, but he must also contend with a vocal opposition, public protests, and the demands of Ukraine’s powerful oligarchs. In contrast, Putin’s grip on Russia’s power vertical shows no signs of slipping. Meanwhile, pressure is building within the EU for an end to the confrontation. These factors will help to convince Putin that he should remain patient. The Kremlin’s thinking with respect to Ukraine can be likened to the Russian saying, “flowing water will grind away stone”. This helps explain Moscow’s recalcitrance, even in the face of international sanctions. Unless Putin is able to thrust the occupied chunk of the Donbas back into Ukraine as a Trojan horse blocking Kyiv’s path to Europe, he will not feel sufficiently incentivized to start playing nice. And so, alas, more bloody indecision looks like the most probable forecast for eastern Ukraine in 2020.

Peter Dickinson is the editor of the UkraineAlert blog at the Eurasia Center and the publisher of Business Ukraine and Lviv Today magazines.

The diverging visions for a future peace settlement in Ukraine were on full display in Paris this week as Ukrainian President Volodymyr Zelenskyy and his Russian counterpart Vladimir Putin met for the first time. These differences were also evident in minor discrepancies that appeared in the Ukrainian and Russian language versions of the summit conclusions.

Monday’s Normandy Four summit in the French capital saw German Chancellor Angela Merkel and France’s Emmanuel Macron sitting down with Volodymyr Zelenskyy and Vladimir Putin in a bid to end years of deadly stalemate and bring to an end the undeclared war between Russia and Ukraine in the Donbas. What kind of impression did the long-awaited Paris summit make in Berlin?