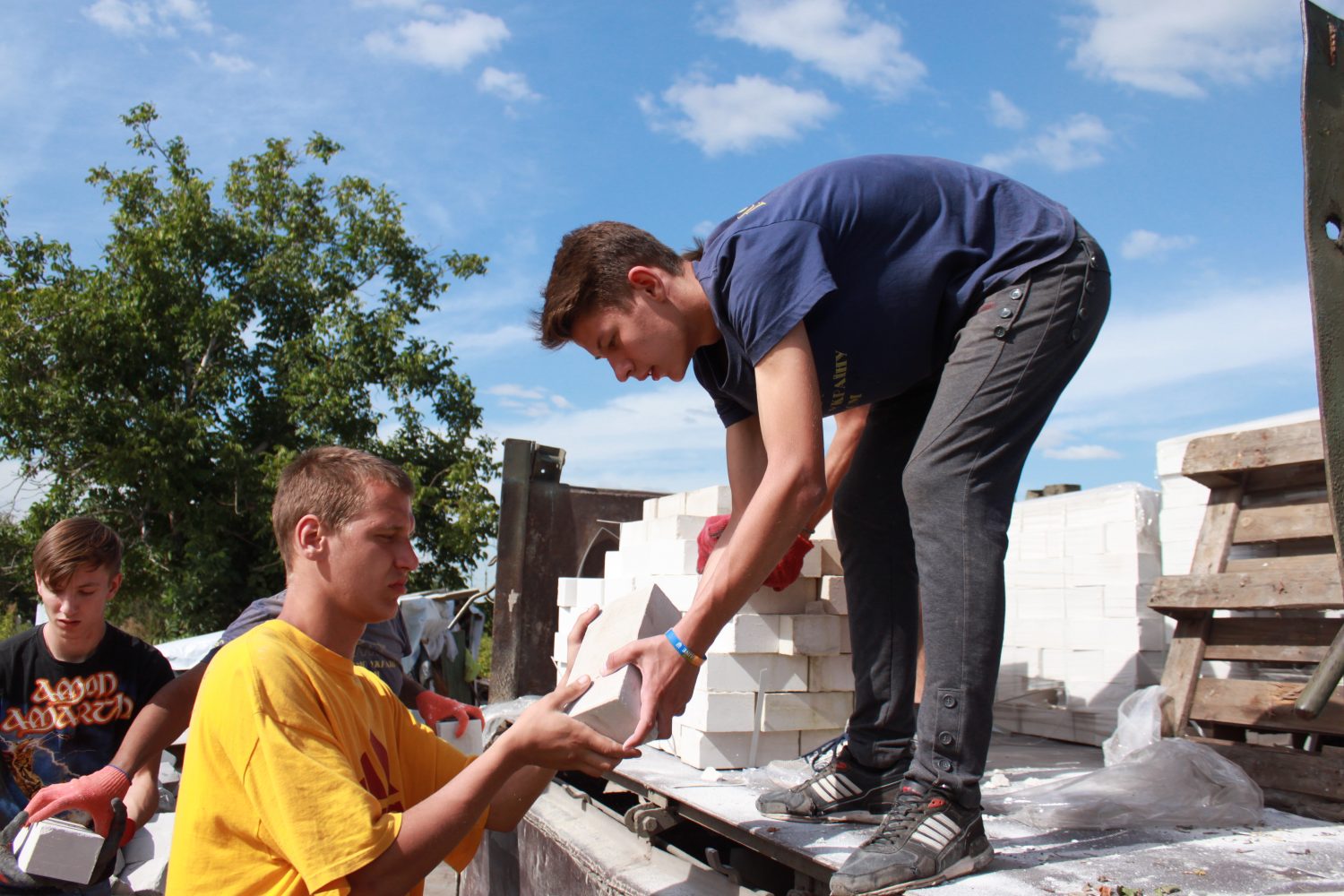 Volunteers unloading a truck of bricks to rebuild a destroyed home in the village of Semenivka, Donetsk oblast. Credit: Courtesy photo

A little over five years ago, the Ukrainian army liberated Kramatorsk, the first city captured by Russian mercenaries in 2014. The government did not have enough resources to respond to war-related needs, so gaps were filled by volunteers. Some joined the military, others went into government, and others worked to reintegrate 1.5 million internally displaced persons.

A group of Ukrainian-speaking activists and development professionals from Lviv, of which I am part, wanted to contribute. So we got our hammers and got to work. We decided to rebuild destroyed houses in Kramatorsk.

In the summer of 2014, Vitaliy Kokor, director of the Lviv Education Foundation, organized the first volunteer battalion in Kramatorsk.

After rebuilding the first home, we realized that restoring a home is not as important as standing in solidarity with people who lived under a military and information blockade for three months.

While Kramatorsk was occupied, Russian media claimed that fascists seized power in Kyiv and would make the Donbas speak Ukrainian. We were not surprised that locals treated us—Ukrainian-speaking volunteers—cautiously at first.

But this barrier broke on the third day of our week-long construction project. As we hammered and talked with those who suffered from shelling, we were invited to eat varenyky and borscht with local families. Interestingly, they spoke Ukrainian to us.

Even after five years of war, there is a big gap between east and west Ukraine. Ukrainians do not travel and in general do not know people from other regions. In 2014, more than 70 percent of Donbas residents had never been outside the region. This is a disaster for any state, especially one at war and in need of a unifying civic identity.

In Kramatorsk, the camp brought young Ukrainians together, but it also helped people take responsibility for their community.

In addition to 50 volunteers from different cities of Ukraine, many locals joined us in Kramatorsk. Not only did we renovate 25 apartments, we were able to create a unique environment of civic-minded people that has since been replicated across the country.

Every evening we had bonfires, sang songs, watched movies, and talked. Of course, these are utterly normal activities. But at the time, residents were in dire need of a safe place to spend time and process what happened.

Everything you know about Ukraine is wrong

The city’s active youth community played a major role in the volunteer effort. When the camp ended, they decided to create a permanent space where young people could continue to gather. Thus, the Freedom Home youth center (Vilna Khata) was born. Freedom Home hosts dozens of educational projects, an annual Easter festival, a business incubator, street food festivals, and a local volunteer program for taking care of elderly neighbors. Kramatorsk has come back to life.

After Kramatorsk, we realized that we were on to something.

We began to do the same thing across Ukraine. Year after year, more cities and towns have invited us in.

One recent example is Volodya Frants in Zhytomyr oblast. After the Revolution of Dignity, Volodya organized a volunteer group in his village of Chyzhivka that sewed clothes and made dry meals for the army that were sent to the frontline. Subsequently, Volodya organized a well-attended artistic festival in his village. People were thirsty for more. But there was not enough infrastructure to support the demand. In two weeks, Volodya, local businesses, neighbors, and Building Ukraine Together volunteers transformed an abandoned city square with a broken fountain into the site of a concert and festival.

The Building Ukraine Together project, which began with a simple desire to help, has evolved into a national mechanism for aid and community development. Ukraine is full of ideas. There is often a lack of people with the confidence and resources to bring these ideas to life. And when volunteers from all over Ukraine come together, communities can accomplish more than they thought possible.

Five years after Kramatorsk, our volunteer initiative has become the largest volunteer movement in Ukraine with a network of more than 2,500 volunteers. Together, we have restored housing for 220 families and helped 17 cities create their own youth centers.

Our engagement with volunteers does not end at camp. Among the hundreds of young people who come to the volunteer camps, many have their own project ideas. Building Ukraine Together gives them special management training with an opportunity to present their business plans to partners and investors who support them financially or in-kind.

Young teams get a chance to experiment and implement their own projects. To some extent, the Lviv Educational Foundation works like an angel investor: by investing in many people, we hope that some will succeed and generate social capital. There is so little practical training in Ukrainian education that we are simply forced to make ‘learning by doing’ possible. Project teams, with meager funds, learn to plan, form KPIs, and evaluate their work. Most Ukrainians lack entrepreneurial thinking and fear responsibility, but not our volunteers.

We are changing Ukraine in a profound way. The youth centers that have emerged after the Building Ukraine Together camps play a role similar to that of the Ukrainian Catholic University in Lviv. They form an environment of people who trust each other and share common values. And this in turn gives one a sense of belonging and a desire to work for something greater than oneself.

We not only dream of a better Ukraine, but we are building it with our own hands.

“I hope this project will be an example for other entrepreneurs and for other communities in Ukraine,” said Mykhaylo Veselskyy.

Freedom Home’s platform is unique in eastern Ukraine, and its organizers want to make it sustainable.