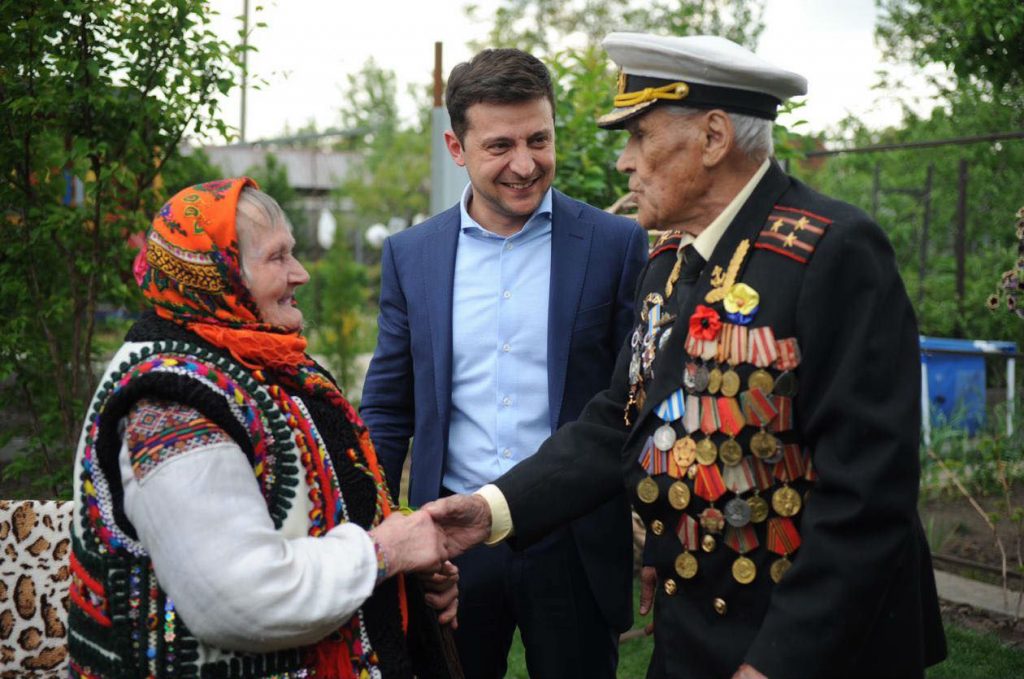 To mark the country’s WWII Memorial Day on May 8, Ukraine’s President-elect Volodymyr Zelenskiy posted this picture of his meeting with former Soviet naval captain Ivan Zaluzhniy and Ukrainian Insurgent Army veteran Paraskeva Zelenchuk-Potiak along with the message: “The key to peace today is unity among all Ukrainians." Courtesy photo

Ukraine’s President-elect Volodymyr Zelenskiy waded into the bloodstained waters of the country’s memory wars during WWII memorial events in early May, posting a picture of himself alongside a Soviet veteran and a former member of Ukraine’s Insurgent Army with the message: “The key to peace today is unity among all Ukrainians.” This was something of a departure for Zelenskiy, who largely steered clear of sensitive historical issues during his presidential campaign while promising to move beyond the conflicting interpretations of the past that have plagued Ukrainian society since the Soviet collapse.

Zelenskiy’s recent WWII photo-op indicates that as the new head of state, he recognizes he will no longer be able to afford himself the luxury of remaining above the fray. Instead, he must now take a lead in Ukraine’s memory wars while choosing his battles carefully, seeking positions that can make sense of the troubled past while mindful of the fact that any potential missteps could reopen old wounds and undermine his calls for national unity.

Finding historical issues that a majority of Ukrainians can agree on is no easy matter.

Today’s Ukraine is a country short on statehood and long on history, creating inevitable conflicts between those who embrace a post-colonial sense of national identity and the many millions who reject efforts to depict Russians as national enemies and paint the entire Soviet era in a negative light. Nevertheless, there are areas where a broad national consensus may be achievable. For example, while the WWII sacrifices and heroism of the Red Army remain focal points of Soviet nostalgia in today’s Ukraine, there has been no concurrent drive to whitewash the entire Stalin era. On the contrary, modern Ukrainian society increasingly recognizes Stalin’s manmade 1930s famine as a crime against humanity and broadly rejects the kind of revisionism that has led to a Russian revival of the cult of personality surrounding the Soviet dictator. This suggests that while many Ukrainians bristle at attempts to denigrate ordinary Soviet folk or sully their own personal memories, far fewer are prepared to defend the authoritarian leadership of the USSR or the policies they pursued.

Zelenskiy will soon have an outstanding opportunity to change the tone of Ukraine’s memory wars. On August 23, 2019, the world will mark the eightieth anniversary of the Molotov-Ribbentrop Pact. This agreement between the Nazi and Soviet regimes led directly to the outbreak of WWII and serves as the ultimate symbol of the totalitarian terror that devastated Europe during the first half of the last century. The anniversary of the Nazi-Soviet Pact is already an internationally recognized memorial day. In 2009, the European Parliament voted to designate August 23 as the European Day of Remembrance for Victims of Stalinism and Nazism. Some countries refer to it as Black Ribbon Day. However, the date has yet to be marked in a manner befitting the scale of the catastrophe it commemorates. With the eightieth anniversary fast approaching, Ukraine could now take a lead on this issue by hosting international memorials of a suitable stature.

There would be no more fitting venue for such a commemoration. Ukraine was the epicenter of Europe’s totalitarian epoch, suffering the unique distinction of genocidal assaults from both Nazis and Soviets. It was the principal battlefield of WWII and the main laboratory in an era of forced famine, mass executions, deportations, and deliberate ethnic displacement. From 1917 until the early 1950s, there was probably no deadlier place. We know that the total death toll was somewhere between ten and twenty million Ukrainian victims, but mere statistics cannot capture the true extent of the catastrophe or its enduring legacy. Indeed, the entire political landscape of modern Ukraine only begins to make sense when viewed through the prism of the country’s totalitarian trauma.

Serving as host nation for international events commemorating the victims of twentieth century totalitarianism would have potentially profound meaning for many Ukrainians. It would allow them to reflect on the horrors of the totalitarian era while reducing the need to demonize or defend their contemporary compatriots. No longer invited to choose sides in an endless rerun of WWII, Ukrainian society would instead have the chance to move beyond the polarization of the post-Soviet period and begin the healing process.

Nazi-Soviet Pact anniversary events in Ukraine could also help to overcome international ignorance about the country. Despite over five years as a major geopolitical hotspot, Ukraine remains one of the most poorly understood nations in the world and is frequently misrepresented on the international stage by Russocentric academics and Moscow-based correspondents. This lack of accurate outside information hampers policymakers and opinion shapers, depriving them of crucial context and leaving them vulnerable to Kremlin disinformation. Greater awareness of Ukraine’s centrality to the totalitarian story would place the country’s current nation-building efforts and ongoing conflict with Russia in a new light.

For Zelenskiy himself, the anniversary of the Nazi-Soviet Pact represents a chance to address Ukraine’s tragic twentieth century totalitarian experience in its entirety, while also standing in defense of national self-determination at a time when large swathes of the country are under de facto Russian occupation. Any attempts to focus attention on the Molotov-Ribbentrop jubilee would prove hugely unpopular with the Putin regime, which has placed the Soviet WWII victory at the heart of modern Russian national identity and outlawed all reference to the Nazi-Soviet partnership of 1939-41. Under Putin, the cult of the Great Patriotic War has reached heights of absurdity that go beyond anything seen during the Soviet era itself. The annual Victory Day holiday is now the biggest event on the Russian calendar and has become an excuse for jingoistic excesses. At the same time, criticism of the Soviet war effort is subject to criminal penalties, with the threat of jail sentences for public references to the Molotov-Ribbentrop Pact. The Kremlin has successfully weaponized memories of WWII in order to defend its own imperialistic instincts and justify its undeclared war in eastern Ukraine. It would be fitting if this propaganda push now ran aground against the historical truth of the Nazi-Soviet alliance.

The timing of this year’s eightieth anniversary is fortuitous. After decades of advances, global democracy is facing an era of new challenges. Meanwhile, Russia’s attack on Ukraine has shattered the sanctity of national sovereignty, and recent events in Venezuela have resurrected old arguments over the need to respect Great Power spheres of influence. In this increasingly claustrophobic geopolitical atmosphere, it has never been more necessary to remind the world of the terrible toll when totalitarian powers collude to impose their will on others. No country has more right to do so than Ukraine.

By leading international memorials to the victims of Nazism and Communism, Zelenskiy could help Ukrainians make sense of their shared past while also providing the international community with the kind of contemporary context they lack. For a land that lost so much in the last century, this would represent a modicum of long overdue historical justice.

Peter Dickinson is a nonresident fellow at the Atlantic Council and publisher of Business Ukraine and Lviv Today magazines. He tweets @Biz_Ukraine_Mag.