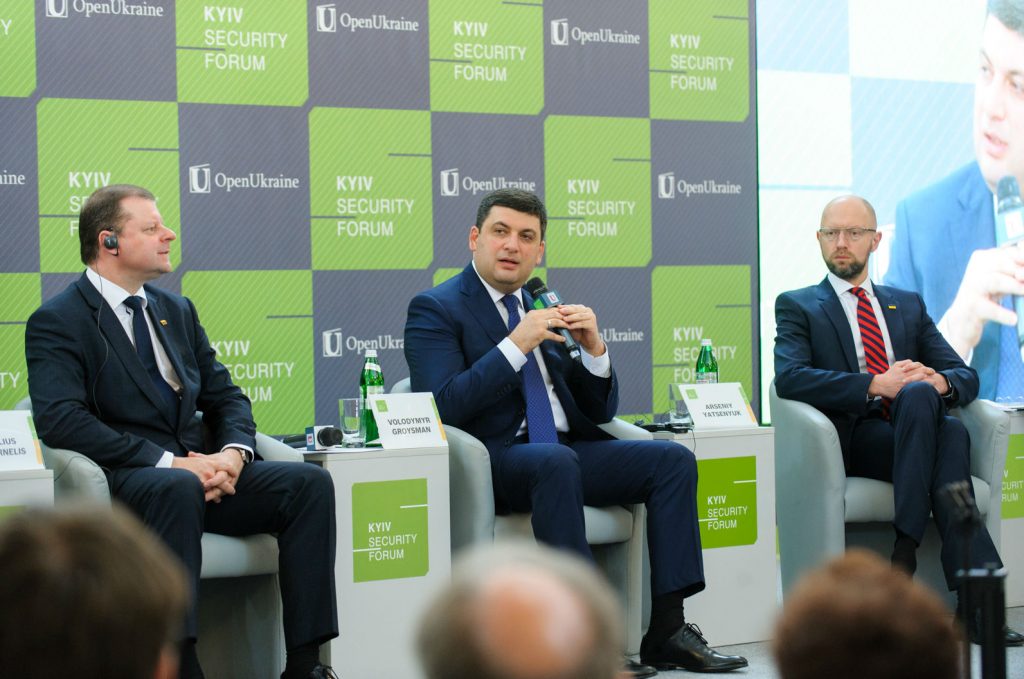 The Tenth Kyiv Security Forum—an important foreign affairs conference conducted annually by the Open Ukraine Foundation—occurred on April 6-7. Headed by Ukraine’s former Prime Minister Arseniy Yatsenyuk and his wife Terezia, the conference underscored an important message: the need for the West to stay engaged and maintain security in the borderlands between Russia and Central Europe, particularly in Ukraine, the most important country in Eastern Europe between the Baltic and Black seas.

This year, the tenth anniversary event was titled “Old Conflicts and New Trends: Strategies for a Changing World.” For Ukraine today, security challenges are defined by the continuing war in the east, the occupation of Crimea, the new US administration’s efforts to find its own voice, and Europe’s ongoing crises and weaknesses.

Russia was represented by three opposition figures: former Duma member Ilya Ponomarev, who voted against the annexation of Crimea and now lives in Kyiv; Dr. Lilia Shevtsova, a veteran policy analyst and former senior fellow at the Brookings Institution; and Professor Andrey Zubov, who was fired from the Moscow State Institute for International Relations for opposing Russian aggression in Crimea.

The Forum opened on the day the European Parliament voted to allow Ukrainians visa-free travel to the European Union. However, European countries still lack a unified position on Ukraine, which plays into Moscow’s hands. Some of the populist and extreme right parties in France and Italy, such as Marine Le Pen’s National Front, and Italy’s Five Star Movement, have taken pro-Russian positions.

The Forum revealed three important messages. First, Ukraine’s will is strong. Every Ukrainian speaker at the event expressed a commitment to fight—and die—for their country. Answering a question from the public, senior Slovak and Lithuanian defense officials both said that in their countries, people would sacrifice their lives for independence. But attendees expressed doubts whether Western Europeans are equally committed.

Second, the Intermarium—the borderlands area from the Baltic to the Black Sea, which includes the Baltic states, Belarus, Ukraine, and Moldova—is consolidating. The interaction between Poles, Ukrainians, and Balts is at all-time high. Romanians and Bulgarians are also crucial to buttress this strategic area, which is standing up to Russian pressure. However, their ability to resist Moscow’s ambitions depends on NATO and US support.

What Europe and the United States are missing in Ukraine and the neighborhood is a clear understanding that both history and geography are dictating Russia’s push west. That push started in the fifteenth century with Ivan III, who occupied the Novgorod Republic, the only democracy that has ever existed on Russian soil. What ensued was a bloody purge and relentless expansion to the west, which included wars against Sweden under Ivan the Terrible a century later. In the eighteenth century, the Russian Empire eventually destroyed the Polish-Lithuanian Commonwealth, and with it, Ukrainian Cossack independent proto-states.

Russia will always treat countries to its west, including Ukraine, Belarus, Moldova, and the Baltic states, as buffers at best, and zones for economic, security, and cultural expansion at worst. Western decision makers always need to keep this in mind.

Part of the EU’s relative disengagement comes from a lack of funding. European security budgets, with a few exceptions, are still below the 2014 Wales NATO summit target of 2 percent of GDP. Without increased defense funding, Europeans have to rely on the United States, which currently has other priorities—from North Korea and the South China Sea to Iran and Syria. European countries, especially Germany, need to begin funding their own eastern borderland security efforts.

Third, and most important, Western policies toward Ukraine need American leadership. The Kyiv Security Forum demonstrated that Germany, Italy, France, and the UK have different priorities when it comes to Russia and Ukraine. Without the Trump administration’s clear understanding of where the US national interests and priorities lie and its policy leadership and implementation, in terms of both NATO and its allies’ cooperation, Ukraine could become a flashpoint with far-reaching implications.

The Tenth Kyiv Security Forum accomplished many things; above all, it clarified that Ukraine is committed to a long-term fight, but that a gathering even as well organized as this one is no replacement for either political leadership or military power. Those need to be provided by the United States and its NATO allies.

Ariel Cohen is a nonresident senior fellow at the Atlantic Council and principal of International Market Analysis Ltd. He tweets @Dr_Ariel_Cohen.