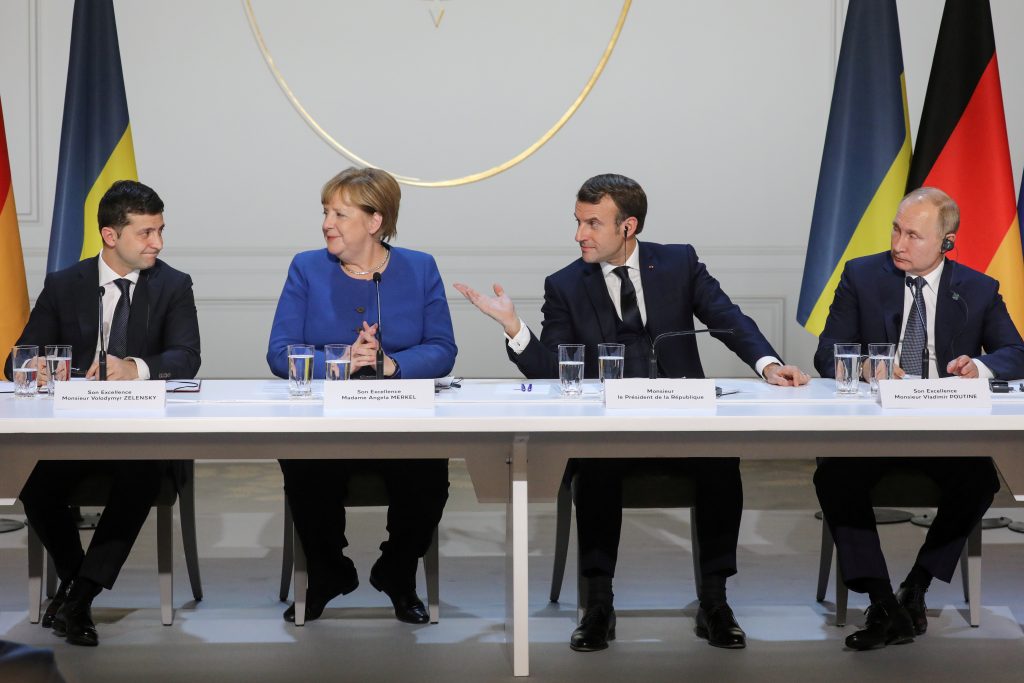 The diverging visions for a future peace settlement in Ukraine were on full display in Paris this week as Ukrainian President Volodymyr Zelenskyy and his Russian counterpart Vladimir Putin met for the first time. These differences were also evident in minor discrepancies that appeared in the Ukrainian and Russian language versions of the summit conclusions.

Monday’s Normandy Format meeting in the French capital featured three official versions of the summit conclusions. There was an English-language document published by the French hosts, together with Russian and Ukrainian versions of what was, at least in theory, exactly the same text. The Office of the President of Ukraine first released the Ukrainian version on the night of the summit, but then introduced edits to this text on the official presidential website two days later on December 11.

The changes related to the passage of the text addressing “Measures to implement the political provisions of the Minsk agreements.” While the English and Russian texts were identical, the version initially released by the Ukrainian side contained slightly different wording regarding the crucial issue of special status for the currently occupied parts of Donetsk and Luhansk regions that could have left the document open to an alternative interpretation. This then underwent subsequent alteration to bring the text more into line with the Russian and English versions.

This episode was more than a curious footnote of diplomatic protocol. It highlighted the broader problems of different interpretations emerging from this latest round of talks in Paris. Such discrepancies are particularly important as President Putin continues to insist that special status for the Donbas should be enshrined in the Ukrainian Constitution, while President Zelenskyy has publicly rejected the idea of federalizing Ukraine based on externally imposed constitutional amendments.

It is not yet clear what Germany and France think about this matter. Evidently, all four sides agreed that special status should come into force if the OSCE mission recognizes elections in occupied Donetsk and Luhansk as meeting international standards. Ukraine has committed to this development by agreeing to incorporate the “Steinmeier Formula” into legislation, but even this is subject to a degree of ambiguity and remains open to rival interpretations.

The Russian point of view, which appears to be closer to current French and German understanding of the issue, clearly envisages constitutional changes. Moreover, there are concerns in Kyiv that references to “special status” could also become a convenient launchpad for subsequent talk of “special rules” governing local elections and “special treatment” for people who have accepted Russian passports or served under Russian command in illegal military formations in eastern Ukraine. This raises the prospect that, despite the assurances of the Ukrainian leadership to the contrary, amendments to the Ukrainian Constitution may yet become part of the diplomatic bargaining process. Any developments in this direction would represent a serious retreat from the diplomatic position won by Ukraine over the past three years.

Attempts to sell constitutional change to the Ukrainian public would likely prove challenging. According to a nationwide poll conducted by DIF in November 2019, 53 percent of Ukrainians think it is unacceptable to grant “special status” to the occupied areas of the Donetsk and Luhansk regions or to introduce such provisions into the Ukrainian Constitution. By pursuing this objective, Russia could successfully use ongoing peace talks to destabilize Ukrainian society and provoke internal unrest between rival political forces. 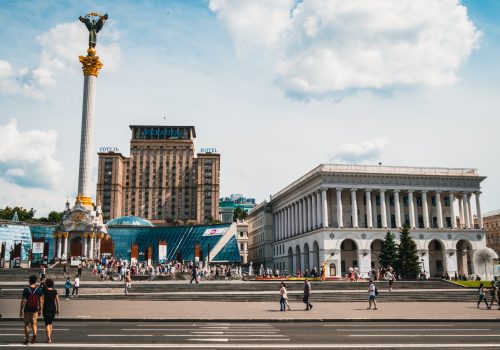 Additional details from the Normandy meeting raise similar alarm bells. According to the official conclusions released following Monday’s Paris talks, the four governments have agreed to find solutions and move forward with the organization of local elections in the Donbas. However, a recent survey found that holding elections in the occupied east of Ukraine on conditions negotiated with the so-called DNR and LNR is unacceptable to 66 percent of Ukrainians. During the joint press conference in France, Putin also called for a “full amnesty” for all participants of armed groups in the Donbas, an idea 63 percent of Ukrainians reject. Such concessions would be inconceivable for the majority of Ukrainians who voted for Zelenskyy and his ‘Servant of the People” party.

In Paris, Putin reiterated calls for the “synchronization” of the security and political components of the Minsk agreement. This stance means that at some point in the not-too-distant future, Zelenskyy may find himself forced to either freeze negotiations as his predecessor Petro Poroshenko did, or risk provoking domestic unrest by accepting Russian peace terms that a majority of his fellow Ukrainians regard as unacceptable.

While the Normandy Format is an important tool for the de-escalation of violence and the release of Ukrainian prisoners, it also clearly carries considerable risks for Zelenskyy. Indeed, the four-month period before the next scheduled Normandy meeting may merely be the calm before the storm. It is crucial that the Ukrainian leader now use this time to convince his French and German colleagues of the need to resist Russian pressure and back Ukraine’s vision for a workable peace agreement. This is the only way to constrain the Kremlin and avoid incentivizing further Russian aggression in Europe. 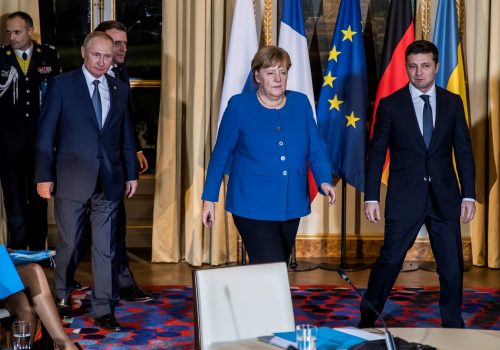 Monday’s Normandy Four summit in the French capital saw German Chancellor Angela Merkel and France’s Emmanuel Macron sitting down with Volodymyr Zelenskyy and Vladimir Putin in a bid to end years of deadly stalemate and bring to an end the undeclared war between Russia and Ukraine in the Donbas. What kind of impression did the long-awaited Paris summit make in Berlin? 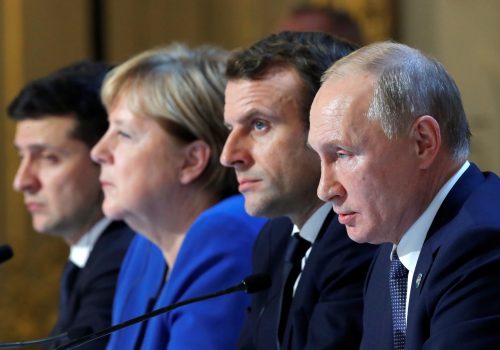 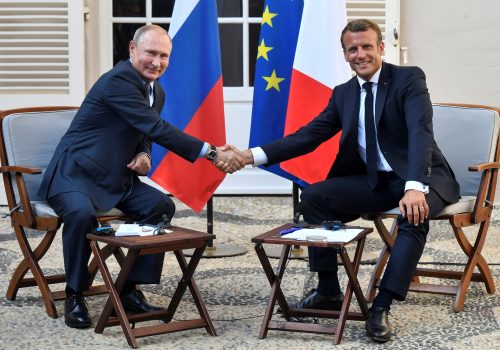 The shadow of Munich hangs over Russia-Ukraine Paris peace talks