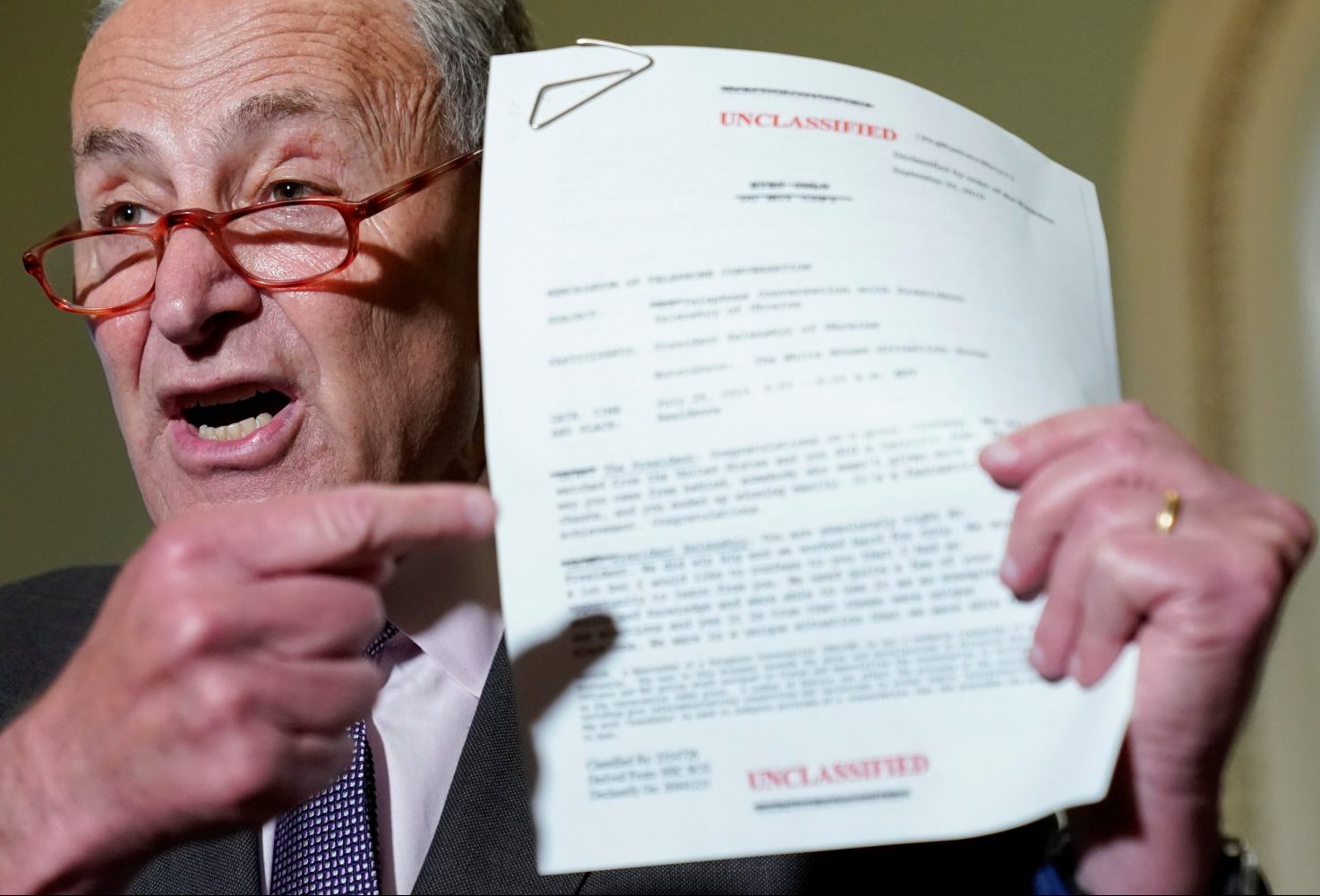 Democratic Senate leader Chuck Schumer holds up a copy of the telephone conversation between U.S. President Donald Trump and Ukraine President Volodymyr Zelenskyy while speaking to reporters in the US Capitol in Washington US, September 25, 2019. REUTERS/Kevin Lamarque

Over the past ten days, Ukraine has become the most discussed story in the world. On September 24, the speaker of the House of Representatives announced the start of a formal procedure meant to determine whether there are serious grounds for the impeachment of US President Donald Trump. The Democrats accuse Trump of misusing his office for political gain; they say he pressured the Ukrainian president into a quid pro quo arrangement in which the US would give military assistance in exchange for investigating the president’s rival after Ukraine’s military aid had been frozen. Trump denies the accusations.

In Ukraine, the situation is seen very differently. We Ukrainians just want to be left out of the fight. We have plenty of our own problems to fix.

Ukraine is one of the largest countries in Europe. We obtained our independence in 1991 when the Soviet Union collapsed. Unlike most of the countries that were a part of the Soviet Union, Ukraine has always been an ally of the West and has pursued as much cooperation with the European Union and NATO as possible. Russia began direct military operations against Ukraine in 2014: it started with the occupation of Crimea and military operations that continue in the Donbas to this day. Ukraine has not only resisted one of the most powerful armies in the world but also keeps developing its economy and increasing its cooperation with Europe and the United States. In fact, our success as a free and sovereign country does not depend on Ukraine only, it also depends on our allies. Military and material assistance from the United States and European governments made it possible to stop Russian President Vladimir Putin and prevent him from taking over our entire country. The sanctions imposed by the European and North American countries significantly damaged the Russian economy and help undermine the Putin regime from the inside. Make no mistake about it: we achieved this together. Russian military aggression is not just a challenge to Ukraine, it is a challenge to the entire democratic world. And the unity in the battle against Russia can be destroyed by the political crisis in the United States.

Throughout its independence, Ukraine has been one of the closest US allies in Eastern Europe. Because of the guarantees that we received from the United States, among others, we gave up the world’s third-largest nuclear arsenal at the time. Our military garrison was one of the largest in the peacekeeping mission in Iraq. Our economic relations are important for both countries.

In the current situation, when Ukraine conducts one of the longest wars on the European continent against Russia, the United States has become our most important ally. The United States imposed sanctions against Russia, now it provides material and military assistance to Ukraine, and sends military instructors and helps us confront Putin geopolitically. Our eventual victory in the war over Russia, sadly, depends on many factors and one of the most important ones is the support of Ukraine’s allies.

From Kyiv, we worry that the current scandal with Trump has implications far beyond Washington. The problem is not that there is a political crisis in the United States; the problem is that an independent country and its interests are being used in this political crisis. But Ukraine is not a political football in the confrontation between Democrats and Republicans. We have never had the slightest desire to interfere in the sovereign affairs of any country. The situation Ukraine has fallen into – the center of the confrontation between Trump and the Democrats – is critically dangerous for my country, but also critically dangerous for achieving peace in Europe.

Of course, constant conflicts and contradictions are natural in politics, but please solve yours first and stop using Ukraine. We have enough of our own problems.

Oleksii Honcharenko is a member of the Parliament of Ukraine.

How’s the US-Ukraine relationship after New York? What should Zelenskyy do next? How could Russian President Vladimir Putin exploit this?

Ukraine’s place in the geopolitical puzzle is shifting. That was the point.

The Kremlin is betting we will forget these names

The release of prisoners was a big win, but activists worry that those who remain behind will be forgotten.