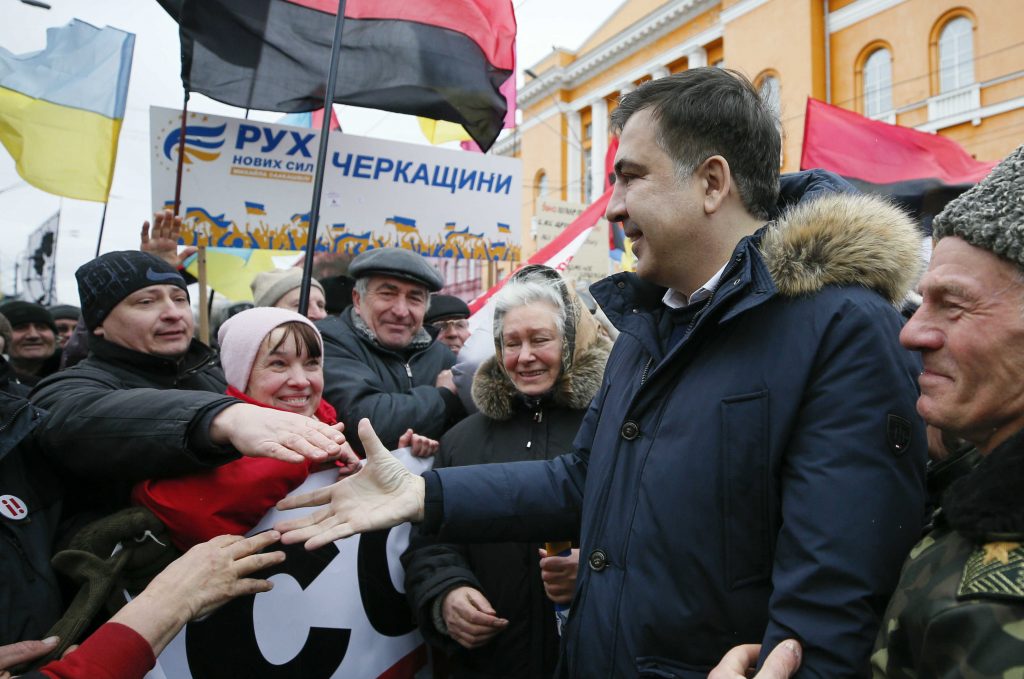 Today opposition leader Mikheil Saakashvili was deported to Poland. For months he has been leading protests outside of Ukraine’s parliament, urging President Petro Poroshenko to resign. The Saakashvili drama has been ongoing; last year he was stripped of his Ukrainian citizenship and then reentered the country illegally. In December, he was arrested and then broke free.

We asked Atlantic Council experts and UkraineAlert friends the following questions: Have we seen the end of Saakashvili’s days as a Ukrainian politician? What does the process of deporting an opposition politician after stripping him of citizenship say about the health of Ukraine’s democracy? Is Saakashvili a special case, or does his deportation send a signal to opposition leaders and civil society groups that they are next?

Aivaras Abromavicius, former Ukrainian Minister of Economy and Trade: Is Misha good or bad? Both Ukrainians and Georgians have very different and very strong views toward him. Yet the unnecessary brutality of his arrest was utterly disgusting and disturbing. You don’t put the former president on the floor and drag him out by the hair of a restaurant in the beautiful European city of Kyiv. You just don’t do that in Europe, or in the twenty-first century.

Michael Bociurkiw, global affairs analyst: PR has never been a strong point of Petro Poroshenko, an oligarch-turned politician-turned Davos elite who’s used to getting his way.

The rush deportation signals the start of the presidential election campaign in Ukraine. It is clear that Poroshenko—under fire for backsliding on reforms—is desperate to rid the playing field of an annoying irritant and charismatic opponent.

The handling was botched from the start—from the embarrassing crossing of Saakashvili over the Ukraine-Polish border to the authorities’ inability to prevent the setting up of a protest camp in Kyiv’s highly-sensitive government quarter to his escape from arrest in December.

Poroshenko’s hand was forced: the Georgian firebrand has built a loyal following and has been voicing what many Ukrainians feel—that the government doesn’t have the fortitude to push through meaningful reforms before its mandate expires. The best way to silence him is to deport him.

Today’s actions do not bode well for opposition groups as it signals the Poroshenko administration is prepared to play tough and prioritize its own interests over the country’s image.

Brian Bonner, Chief Editor, Kyiv Post: What’s happened has been wrong or illegal on many fronts—the way his citizenship was revoked, his extradition, the hounding of someone whose biggest ‘crime’ seems to be opposing President Petro Poroshenko. He’s an example of what the Kyiv Post called “Political Persecution in the Age of Poroshenko” as part of our “Justice Delayed, Justice Denied” series. (Two earlier segments focused on allegations of serious corruption and murder that are uninvestigated and unpunished, as well as criminal cases that drag on indefinitely.) That said, while Saakashvili is right in calling attention to impunity, corruption, and obstruction of reforms, he is a showboat. I think some Ukrainians tired of him and see him as a foreigner. As an American in Ukraine, I think foreigners can, should, and do help to uphold fairness, rule of law, and other democratic principles. Most Ukrainians I know welcome such support. But only Ukrainians can decide what kind of society they want and are willing to fight for.

Michael Carpenter, former US Deputy Assistant Secretary of Defense, Senior Director at the Biden Center, and Nonresident Senior Fellow at the Atlantic Council: If Saakashvili is deported it will be bad for Ukraine and worse for Georgia. When the law is applied for ulterior political purposes, both the rule of law and democratic political culture are debased. Saakashvili is a deeply polarizing figure and neither Ukraine nor Georgia benefit from a decision that will only result in greater political polarization.

Peter Dickinson, Nonresident Fellow, Atlantic Council and Publisher of Business Ukraine: The Ukrainian authorities’ rough and incompetent handling of Saakashvili has been a self-inflicted wound from start to finish. The time to deport him was in the immediate aftermath of his illegal entry into the country last autumn. Instead, he was allowed to move about Ukraine freely before eventually being taken into custody and then released. To outsiders, the inevitable impression was of a lawless and chaotic environment. Now we are confronted by this latest heavy-handed episode in the comedy of errors, with its disastrously authoritarian optics. Saakashvili’s relatively high international profile will guarantee considerable negative publicity for Ukraine and he is sure to keep himself in the media spotlight as much as possible while in exile. Looking ahead, he is likely to seek a way back into Ukrainian politics as this is his only hope of remaining on the stage of history. He is still too young to embark on a life of academic pondering and will look to return to Ukraine any way possible.

Maxim Eristavi, Nonresident Research Fellow at the Atlantic Council and Cofounder of Hromadske International: Here’s the key for making sense of the Saakashvili news: keep the issues of him as a political figure and his deportation separate. His controversial and often destructive role in Ukrainian politics cannot be contingent on the fact that stripping him of citizenship and then deporting him were done in jaw-dropping violation of international law. Saakashvili and his party have never been popular among Ukrainian voters, but the way President Petro Poroshenko ‘handled’ him seriously damages the foundation of Ukrainian democracy. It also sends a warning message to all of Poroshenko’s rivals in the upcoming 2019 election: any dissenting voices will be ruthless squashed. Saakashvili and an ongoing crusade against anti-corruption activists and journalists just happen to be the first line of attack by a president who is terrified by the collapse of his ratings and diminishing chances at reelection.

Diane Francis, Nonresident Senior Fellow at the Atlantic Council and Editor at Large with the National Post in Canada: The Saakashvili saga began when Poroshenko imperially parachuted him into the country by giving him an important job, then granting him full-fledged citizenship. Within months, Saakashvili resigned and accused Poroshenko of corruption then campaigned against him. Not surprisingly, Poroshenko waited until Saakashvili had left the country then illegally stripped him of his Ukrainian citizenship.

This fall, Saakashvili dramatically barged back into Ukraine across the Polish border to wage a legal battle to retain his citizenship and, while doing so, to claim refugee status. What followed was a Keystone-Kops series of court and police attempts to arrest, detain, and harass him and his followers. Now it appears he has been deported to Poland.

So, what are the takeaways from this?

Poroshenko hands out favors and withdraws them to silence dissent. Ukraine’s courts have abrogated international law by not granting refugee asylum to Saakashvili because he is a political foe.

These abuses—along with others—illustrate that the rule of law does not yet exist in Ukraine. It is rule by oligarchy.

Adrian Karatnycky, Senior Fellow, Atlantic Council: In the early part of this millennium Saakashvili was an international icon of reform and democracy. Today, his reputation in Georgia is tarnished—with many disappointed in the authoritarianism and economic cronyism that reigned during his second term as president. In Ukraine, too, his popularity has waned.

One thing is certain. Saakashvili’s career is on a steep downward spiral. The former Georgian president continues to dream of new revolutions that will revive his political fortunes. But his rapid decline is a consequence of misreading the pluralistic politics of Ukraine, a country in which people occasionally back populists but never fully trust or idolize their leaders.

Saakashvili’s fortunes are paradoxically an indicator of the success of the people power revolutions he helped launch. They’ve generated strong civil societies in Georgia and Ukraine and moved political discourse away from the street and into the realms of technical experts, media scrutiny, institutions, and political contestation—the main instruments for change in democratic societies.

Still, given his energy and charisma, he cannot be counted out in the long haul.

Sergii Leshchenko, Parliamentarian with the Bloc of Petro Poroshenko and former journalist: He sees the deportation of Saakashvili as “the worst example of selective justice” and “an attempt to control the political process by Poroshenko and his clans.”

Violeta Moskalu, Founder of the Global Ukraine Foundation:  Saakashvili plays a historic role in Ukraine’s fight for democracy. His courage and his uncompromising struggle against the kleptocratic system forced Ukrainian President Petro Poroshenko and his allies to take off their masks and show their true nature. They are really ready to do anything to defend the interests of their corrupt, oligarchic, and anti-democratic clan.

Young opposition and civil society leaders understand the danger of these illegal acts coordinated by Bankova in Kyiv. In fact, the hashtag #YouAreNext has been popular on social media.

I saw Misha the day before he was deported and his message was clear: “Ukraine needs uncompromising leaders to get rid of these corrupt clans. Our country deserves a better future.” I couldn’t agree more.

Paul Niland, Founder, Statement Email: The key thing to understand is that Saakashvili, despite positioning himself as such, is not an “opposition leader” in Ukraine. The group he leads, “The Movement of New Forces,” is vocal and active, but its numbers are relatively small, and they don’t threaten any of the established political figures.

Saakashvili’s actions of late show that democracy is actually alive and well in Ukraine; he joined forces with Yulia Tymoshenko about four months ago for a  march that resulted in the establishment of a full-time protest camp close to parliament. It is still there, and people exercise the right of free assembly unmolested by the authorities.

The last march organized by those close to Saakashvili took place February 4; a few thousand people marched freely through downtown Kyiv and then speakers addressed the crowd from a stage on European Square. More will soon be learned about the details of the arrest and deportation of Saakashvili, and serious allegations had been made about his activities, but democracy in Ukraine is not under threat.

Alex Ryabchyn, Parliamentarian with the Fatherland Party: I am not a fan of Saakashvili as a Ukrainian politician, although I appreciate what he and his colleagues did in Georgia. He didn’t bring the promised results in Odesa, his speeches were too emotional, he often behaved irresponsibly to people who trusted him, and one could question the sources of the funds for his political activity.

In addition to “corruption,” “war,” and “oligarchs” in the headlines of top international newspapers about Ukraine, there will now be “tyranny” and the “rollback of democracy” after what Poroshenko has done to his former friend.

It will have bad consequences not only for the ruling authorities in Ukraine, but also for the whole country.

Victoria Voytsitska, Parliamentarian with the Samopomich Party: The government used Saakashvili and his name when they needed to sell the idea that they were building the New Ukraine internally and to the outside world. Once he became a burden by calling out corrupt, high-level officials, they decided to get rid of him in a brutal way. The brutality of his arrest today is inhuman. It is the worst example of the violation of human dignity. The demonstration of unnecessary force sends a clear message: there will be no limits, including moral, in dealing with political opponents from now on. The winter of autocratic rule has come to Ukraine.

Melinda Haring is the editor of the UkraineAlert blog at the Atlantic Council. She tweets @melindaharing.