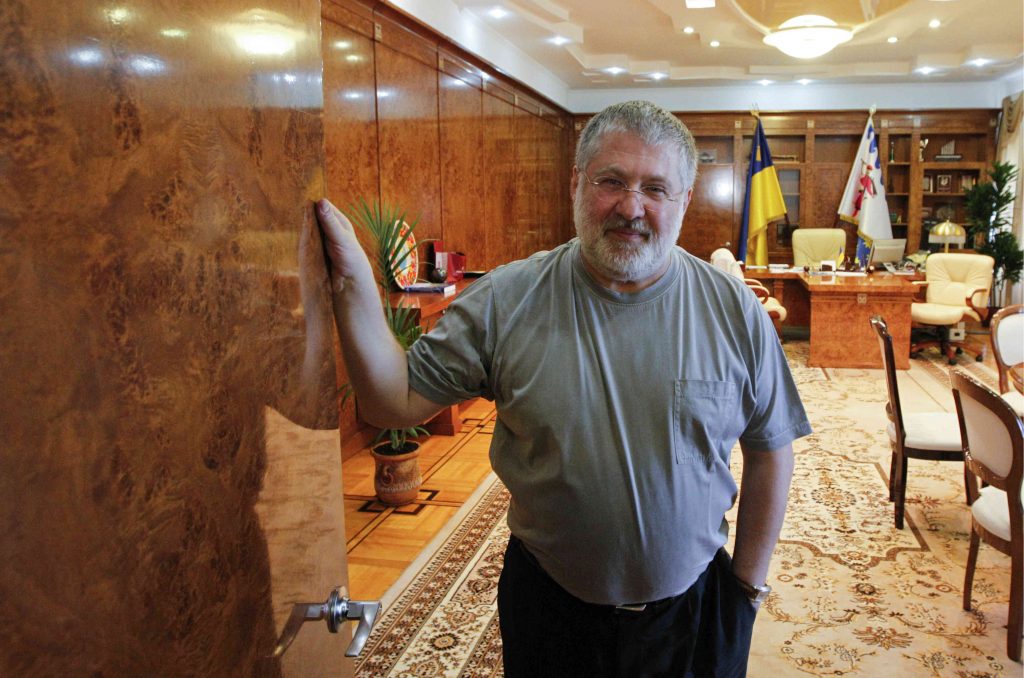 Ihor Kolomoisky, an oligarch and former governor of the Dnipro region poses for a picture at his cabinet in the regional government headquarters in Dnipro May 24, 2014. REUTERS/Valentyn Ogirenko

The United States invented many things, but anti-trust laws and competition policy was arguably the most profound. These laws establish fair rules for the marketplace, and are why the country became the richest and most powerful on the planet. Without these, the United States would look like Russia or Ukraine: An impoverished populace and a moribund economy and political system owned by a few dozen oligarchs.

The most dramatic example of the wisdom of these laws occurred in 1904 when Rockefeller’s oil giant Standard Oil controlled 91 percent of oil production and 85 percent of final sales in the United States. Its dominance allowed it to increasingly abuse workers, competitors, suppliers, and consumers. But in 1911, the US Justice Department sued the group under the federal antitrust law to promote competition in the marketplace and ordered its restructuring into thirty-four companies to be sold to independent entities.

This draconian measure was not undertaken out of spite or political revenge. It was in the name of fairness and it saved the United States. Without anti-competition restrictions, economies are like hockey games without referees so the goons control the ice, win all the games, and prevent smaller, swifter, smarter players from playing. Rampant concentration of power destroys any economy, enterprises, and opportunities.

This is why Ukraine’s new President Volodymyr Zelenskyy and parliament must immediately set up an anti-trust regime. This is not rocket science, and the templates and experts exist that can facilitate Ukrainian efforts to finally wrest the iron grip of oligarchs from their economy in order to provide opportunities for the best, smartest, and fastest. An anti-trust regime must be in place before the government undertakes mass privatizations of inefficient and corrupt state enterprises—to prevent oligarchs or their allies from snapping all of these up and becoming even more powerful.

But, in tandem, there must be limits placed on foreign ownership or else Ukraine’s economy will be controlled by Germans or Americans or the Chinese. Foreign direct investment is desirable, and essential, but should be restricted to those bringing in capital to build new assets and services, not those merely taking over anti-competitive, abusive oligarchic, or state-owned empires.

Without these reforms, nothing will change because Ukraine’s concentration of economic power is already off the charts. According to Deloitte’s Central Europe Top 500 report, a survey of the largest companies in Central and Eastern Europe, up to 64 percent of Ukrainian firms are controlled by local private capital (read oligarchs). In no other country in the region is local private capital as strong as in Ukraine.

The level of aggregate concentration of power should be limited (for instance, no one should own more than 20 percent in a sector or industry) and strictly enforced. Monopolies must be broken up and new ones prevented—such as those that exist in Ukraine in the fertilizer, steelmaking, and energy distribution areas. Farmland privatization should also impose limits on aggregate ownership and concentration of power in markets (such as the media) must end.

They recognized that the failures of their formerly non-competitive economies were due to government ownership, but realized that privatizations would end up in the hands of politically-connected oligarchs, as has happened in Russia and Ukraine. They also realized they needed limits on foreign ownership of privatized assets or else, as one Czech expert put it to me in 1991, “The Germans or Americans could write a check for our entire economy.”

Their competition authorities play a crucial role in market surveillance, de-monopolization efforts, import liberalization, restructuring of natural monopolies, and merger control. For instance, their laws publish an exhaustive list of practices that are prohibited unless they are “necessary to conduct an economic activity” and do not cause a “significant” restraint of competition.

Similar to the Czech and Slovak laws, the Hungarian law provides examples of prohibited anticompetitive agreements including those on price fixing, market division, boycotts, discrimination against purchasers or sellers, limitation of production or distribution, and restriction of market access.

This is why one of the first actions the new reform government in Ukraine must undertake is to create tough and independent marketplace referees to guarantee that there are fair economic rules to govern the conduct of business, privatizations, de-monopolization actions, forced divestitures, and entry of new local and foreign players into its economy.

Anti-trust regimes will represent a rule of law unto themselves and bypass Ukraine’s crooked court system. Entrepreneurial and hard-working Ukrainians and consumers deserve a fair, free enterprise system. Without that, their oligarchs will continue to control the country, their wages will remain suppressed, prices high, and opportunities to get into business or compete impossible.