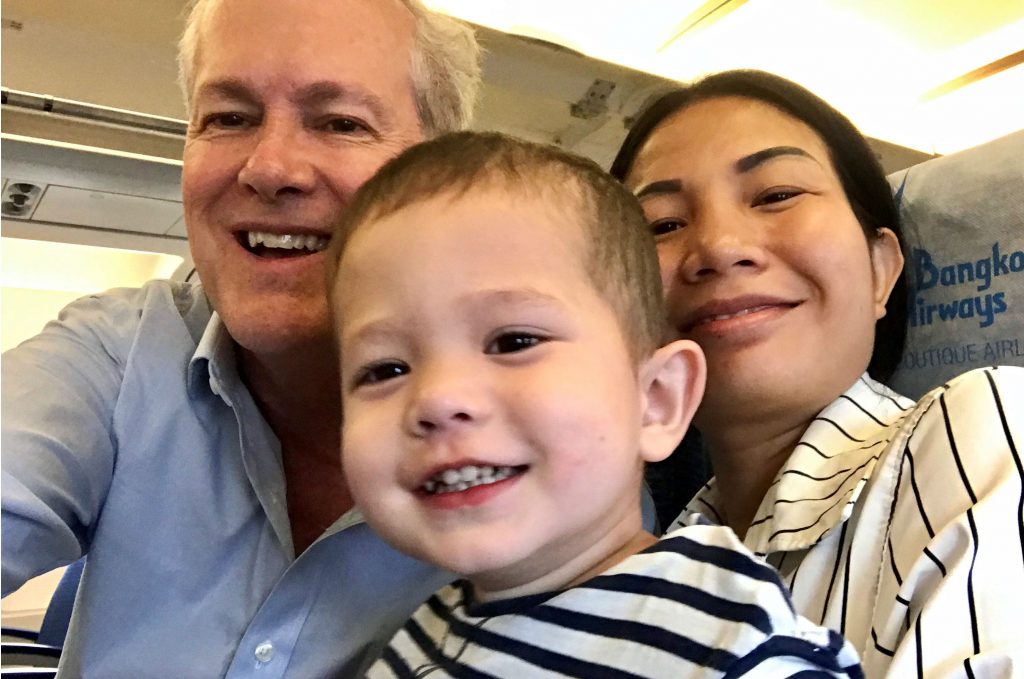 Enter Ukraine’s sparkling new passport service center on the third floor of a shabby 1990s Kyiv shopping center and you feel you have entered Ukraine’s world of the future: bright lights, a digital ticket system, and 60 stylishly uniformed young men and women. They are all devoted to giving you, the Ukrainian citizen, a new biometric passport allowing for work, travel, and study in the EU.

But when my wife and I—two foreigners—approached the welcome desk in February, brows furrowed. The supervisor was called. Rule books were thumbed through.

Your foreign marriage certificate is no longer valid in Ukraine. No matter that it was valid for your residency permits of 2016, 2017, and 2018.

Although it was registered by Thai Ministry of Foreign Affairs, by the US Embassy in Bangkok, translated into Ukrainian, notarized several times, the marriage certificate now must be validated by Ukraine’s Embassy in Bangkok.

In turn, the Ukrainian Embassy in Bangkok ruled that Thai Foreign Ministry certification stamps more than 90 days old are no longer valid.

While Vladimir Putin offers Russian passports to all Ukrainians, starting with those living in fringe areas controlled by Russian troops, Ukraine sleepwalks ahead, marching toward a demographic abyss, tied in knots by bureaucratic red tape that stifles business, bars immigration, and encourages emigration.

From my office in Kyiv’s Golden Gate neighborhood, I see two notaries and three English schools. The notaries represent a faux legalism in a country where judicial decisions go to highest bidders. The English schools offer a ticket out.

In one generation, since independence in 1991, Ukraine’s population has fallen by 23 percent—from 52 million to 40 million today. For post-independence political elites, that is a failing grade.

More ominous for the 2020s, Germany’s Bundestag is preparing a labor liberalization law designed to meet its growing labor shortage by allowing Ukrainians to work in Germany on short-term contracts.

Here in Kyiv, German social scientist Andreas Umland and his Nuremberg colleague Andrej Novak make an eminently sensible proposal: reverse the flow. With Ukraine’s low cost of living, high-quality private health care, and proximity to the EU, Ukraine could attract European retirees to move here. They would spend their pensions on restaurants and rent some of Kyiv’s 60,000 empty apartments. They could teach their native languages. Their physical presence would help integrate Ukraine with the EU and generate foreign investment.

But six months after Umland aired his proposal, the response is silence.

Loudly publicized immigration ‘reforms’ of the late Poroshenko period proved to be dead letters. About eighteen months ago, a new law gave visa and work permit priorities to graduates of the ‘World’s Top 100 Universities.’ Remarkably, that did not help this Yale graduate. And it does not apply to journalists.

A second measure was announced a few months ago relieving foreigners of the need to leave the country to renew their visas. That did not work for an American lawyer friend who had to make a visa run to Poland last month. Indeed, if the silver-haired partner of a Kyiv law firm cannot get it right, maybe it is time to finally drop the ‘blame the victim’ refrain.

In my case, I have studied in France, Colombia, and Brazil. I have worked in Switzerland, Brazil, Cote d’Ivoire, Canada, Japan, Russia, and  Ukraine. I have visited 100 countries, including North Korea.

Never have I encountered a country that declared a previously accepted document to be ‘invalid’ or declared that another country’s official stamp had ‘expired.’

How is my quest to renew my one-year residency in Ukraine faring?

After 93 emails to Thailand and a trip to Bangkok, I got my marriage certificate re-re-certified by the Ukrainian Embassy. It cost me $2,000 in airfare, hotel, and Thai lawyer fixer fees.

After about 200 emails, I have received my temporary residence permit. My wife should get hers next week. This cost us $1,000 for twelve unique procedures performed over four months.

In retort, Ukrainians might cite the US Embassy’s 41 percent visa rejection rate in Kyiv. The US immigration system is undeniably unfriendly, bureaucratic, and often dysfunctional.

But, face it: the difference is that half the planet wants to move to the United States.

With President-elect Zelenskiy taking office soon, he can settle for the path of least resistance. Or he can cut radically cut red tape, drop the marriage taxes, and open Ukraine to fresh blood, new ideas and foreign experience.

A strategy for Moldova

The Republic of Moldova, a sliver of land bordering the European Union (EU) and NATO’s eastern edge, finds itself at a critical crossroads twenty-seven years after gaining independence from the Soviet Union.

Beyond borderlands: ensuring the sovereignty of all nations of Eastern Europe

Territories between great powers—borderlands—have always been areas of strife. So it is with the countries caught between Russia and the West, those that were once part of the Soviet Union or firmly within its sphere of influence.

While the West continues to support efforts to democratize the countries of the Eastern Partnership (EaP), shifting international trends threaten to slow the momentum.