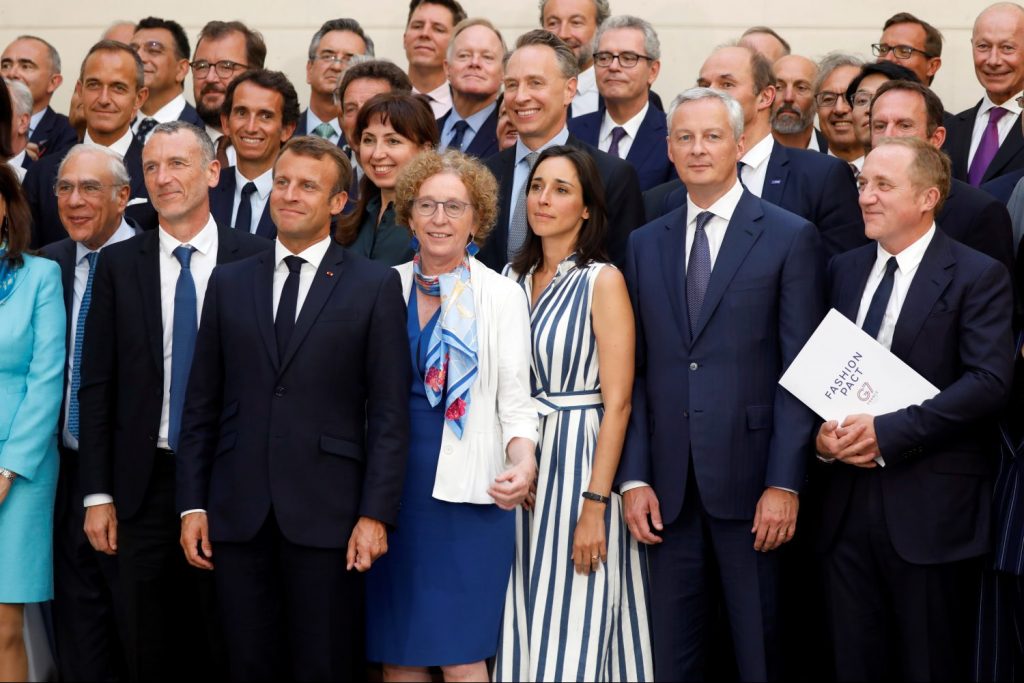 French President Emmanuel Macron poses for a family picture after holding consultative talks ahead of the Biarritz G7 summit, at the Elysee Palace in Paris, France, August 23, 2019. REUTERS/Charles Platiau/Pool

A message to the G7 leaders and the leadership of Ukraine:

In the past five years, I have maintained a dialogue with the leadership of all the G7 members and the European Union. As the head of Ukraine’s government and thereafter, I have had the privilege of maintaining ongoing contact with our partners, considering it a duty to strengthen the most important thing—the international coalition for the protection and support of Ukraine and the unity of our common stance against Russia’s aggression.

On the eve of the G7 Summit in France, once again I address our partners and I also appeal to the new leadership of Ukraine.

We all want peace.

The fact that negotiations with Russia are at a dead end is not the fault of Ukraine or the West. It is Russia’s fault and responsibility.

The new leadership of Ukraine has made it clear that it believes in a possibility of changing the Kremlin’s position.

The last five years have taught us well that the goodwill of Ukraine and the West is not enough for peace, though the Kremlin counts on using this goodwill to lead us into a trap of fatal mistakes.

The second potential mistake is to pile up everything on one “chessboard,” that is, to link the strategic issues that are intended to deter the aggressor with local and tactical concessions.

The Kremlin recognizes neither the rules nor the format of the game. For the war, the Kremlin has saved many different “chessboards” and ensured numerous ways to avoid responsibility.

Russia has attacked not only Ukraine. The Kremlin has long launched an attack on the civilized principles of international relations. This is evidenced by the tragedies in Moldova, Georgia, and Syria.

The weakening of sanctions and international isolation of the Kremlin should depend not on several forced “good” gestures from Russia, but on the final resolution of its crimes and bringing their perpetrators to justice.

For Ukraine, it means the return of the occupied territories, compensation for our great losses and damages, and respect for our national sovereignty and borders.

Ukrainians are world champions at coping with crisis

The ability to recover from national crises is plugged into Ukraine’s DNA.

Instead, it looks like Russia is being told: look, compromise at least in something and you will be rewarded greatly. The Kremlin will be grateful again—the policies of aggression, international terrorism, and kidnapping bring good results and go unpunished.

This signal, by the way, would be well noticed not only in Moscow. It will be remembered wherever anyone tries to undermine international law by force.

And finally, there is the third trap, which is largely about Ukraine itself. No political and diplomatic agreements must paralyze Kyiv’s international activity and our position of truth. Following the failure of the Budapest Memorandum, and in the absence of any real security guarantees, Ukraine has only a few means of combating the aggressor.

First and foremost, it is our army.

Second, it is our diplomatic activities and strong unity with our strategic partners based on shared commitment to international law.

Then, it is the unity of all our national political forces and civil society.

And, most importantly, it is a position of truth that we say out loud to the world.

Bidding for “tacit concessions” around restoring the G8 format without freeing the Ukrainian territories is a wrong signal. It means that the tactics, aimed at appeasing the aggressor, may take over the strategy of bringing a long-term peace to Europe.

Such fatal errors cannot be tolerated.

There is no place for Russia in the G7.

There is no place for an aggressive Kremlin in the UN Security Council.

There is no place for Russia’s current political regime among the civilized international community.

Until the rights and sovereignty of those nations who suffer from their crimes are restored.

Quick solutions are capable of causing disaster. Only the unity of Ukraine and the West against the great common threat and our joint consistent actions to hold the aggressor accountable have been and remain a real path to true peace.

Arseniy Yatsenyuk was prime minister of Ukraine from 2014 to 2016 and is the founder and head of the Open Ukraine Foundation.