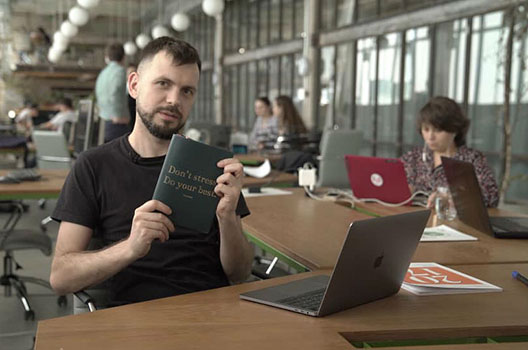 Yuriy Fylyuk is a businessman, dreamer, and revolutionary who is “trying to make a middle class revolution in Ukraine” from his base in Ivano-Frankivsk, Ukraine. He’s pictured at the old Soviet factory Promprylad that he and his team are transforming. Credit: Yuriy Fylyuk Facebook Page

One could be forgiven for mistaking thirty-six-year-old Yuriy Fylyuk as just another of the bearded foodie entrepreneurs who dominate Ukraine’s culinary scene. But the soft spoken Fylyuk is far more.

Yevhen Hlibovytsky, high priest of Ukraine’s civil society and partner at the Pro.mova consulting firm, has yanked me out of Kyiv to see what he describes as the most impressive civil society project in the country—in Ivano-Frankivsk, a town of 230,000 in western Ukraine. The details are scant, but anytime Hlibovytsky offers to take you on a road trip, the answer is, “Absolutely.”

At the Kyiv Boryspil airport, Hlibovytsky introduces me to Fylyuk, who started his day in Odesa and will end it in Ivano-Frankivsk. Fylyuk is a businessman, dreamer, and revolutionary who says he’s “trying to make a middle class revolution in Ukraine.”

In Ivano-Frankivsk, Fylyuk and the Teple Misto nongovernmental organization he oversees built Urban Space 100, a smart, glass-paneled restaurant with vibrant murals that would easily fit in Brooklyn or Portland. It provides space for ordinary people to meet and discuss ideas while enjoying a good meal.

It’s a community restaurant, which means that Fylyuk got the start-up capital from one hundred people who invested $1,000 each. Twenty percent of the income covers costs, while 80 percent funds program ideas. The restaurant is democratically run and includes regular meetings where investors decide which civil society projects to back.

Sitting directly across the street from the city administration building, Urban Space 100 offers a physical space for debate on subjects that were previously off-limits. For example, its staff brought lawyers, developers, and an architect together—with a neutral moderator—to prevent developers from destroying the area’s parks. To date, it has held 260 public discussions and 900 events.

To an American reader, a physical space to discuss public issues may sound pedestrian, but it’s hard to overstate how important it is in Ukraine, where there are virtually no “third” places consistently available for such use.

Having a neutral space for debate is especially important in a one-party town like Ivano-Frankivsk, which is dominated by Svoboda, a populist, conservative, religious party. (Pat Buchanan is the closest equivalent in US terms.)

During the Soviet period, Ivano-Frankivsk was a closed region. Its location, relative isolation, lack of capital, and limited access to education make economic development and interconnectedness a challenge. However, the Hutsul culture of self-reliance makes practically everyone a go-getter. It’s chock full of entrepreneurial zeal, Hlibovytsky notes. “DIY [do it yourself] is in the blood,” he says.

Plus, the roads have improved, as have rail links, so Ivano-Frankivsk is enjoying a bit of a boom from weekend tourism and skiers on their way to the Carpathian Mountains two hours south.

But that’s not all.

Before starting Urban Space 100 in 2014, Fylyuk and his partners opened five new restaurants in Ivano-Frankivsk, including Fabbrica, an award-winning Italian restaurant with ingredients sourced wholly from Ukraine.

Fylyuk shows me his homemade pasta machine and proudly points to the purple beet-infused linguini noodles that are drying. The thoughtfully laid out restaurant, mostly wood and brick, is two floors and includes a space for children to play. It takes no imagination to see my daughter boiling water in the children’s play area and I easily forget that I’m not in Washington, DC.

Over the meal, Fylyuk shyly enquires if I like the meal and starts to relax. He lives in Ivano-Frankivsk part of the time, but travels constantly to raise capital for his next project—which may be his most ambitious yet.

As we pull up to an old Soviet factory that takes up an entire city block, it’s raining and the uncovered metal staircase is rickety and slippery. Neither Fylyuk nor Hlibovytsky have told me exactly what this dark, neglected place, the Promprylad factory, is as we wind our way through sheetrock and exposed lightbulbs to the third floor.

There, Fylyuk smiles and gestures to 1,800 square meters of finished commercial space that already includes sixteen businesses. Eight businesses line each side of a long hallway where tables and chairs are set out for people to hang out. It’s late and the space is empty.

Normally, it’s a beehive of activity, Hlibovytsky says. The design is intentional: plate-glass fronts are meant to convey open-mindedness, creativity, friendliness, and a desire to share ideas with others.

The first business is a dance school with a proper ballet floor that also offers morning yoga classes. Other businesses include an art gallery, a workshop with rotating artists, a video and animation studio, research and design for Shuflia Leather Manufacturing, a business to test robots, a large We Work-style area where startups can rent space, the IT company Lotatech, Metalab workshop to address community needs, and importantly, the investment department of Ivano-Frankivsk city administration.

Fylyuk is quick to point out that what he has in mind is not just an office center. He wants ethical sustainable businesses in the old factory. This is also the first physical space in Ukraine where businesses, nongovernmental organizations, and representatives from city government have all worked alongside each other.

Fylyuk explains his five-year plan for Promprylad. So far, he has raised $1.2 million. He needs to raise another $25 million. Half of the space will be commercial and half will be set aside for nonprofits. Seventy percent of the occupants will pay market rates, while 30 percent will be subsidized for education and art.

As we sit and sip coffee, it takes effort not to gasp or alternatively tell Fylyuk that he’s crazy as he shows me the blueprints for the master plan. It includes a state-of-the-art concert hall for 3,000 people, as well as a hotel, gym, food court, brewery, art center, children’s center, and R&D center.

I begin to see just how revolutionary Fylyuk is.

“If this works out, the entire former Soviet Union looks like this,” Hlibovytsky said. He’s right, of course—but he may not be thinking big enough. If Fylyuk succeeds, the model might be copied in rust-belt cities across the United States as well.

In its heyday, the factory made gas meters and sold them in sixty-four countries. With Fylyuk’s business smarts, Ivano-Frankivsk’s new transport links, and the city’s growing reputation, transforming the old factory—and the city—may be doable.

The next item on his to-do list is to buy the building for $4.5 million, and Fylyuk is anything but stressed.

Hlibovytsky, who sits on the supervisory board of Teple Misto (Warm City), the NGO that oversees both Promprylad and Urban Space 100, says he’s impressed by Fylyuk. He thinks that Ukraine’s future political leaders will emerge from business. Fylyuk is a new kind of accountable leader who listens to counsel and is receptive to critical feedback, a refreshing contrast to the autocratic Soviet school of leadership. The board put the brakes on Fylyuk’s expansion plans three times, and he listened.

Fylyuk grew up in Transnistria, the no-man’s land between Ukraine and Moldova, and moved to Ivano-Frankivsk when he was thirteen. As a university student, he was actively involved in student politics and served as a regional director of a major student organization in eastern Ukraine. With his low-key manner, service ethos, and shy smile, Fylyuk is incredibly likable and likely to appeal to a wide swath of Ukrainians. He’s worldly but not pretentious, speaks fluent English, and knows how to lead teams.

I ask Fylyuk if he wants to go into national politics, but he says he’s not interested now. He’s too busy trying to start a middle-class revolution in Ukraine.

Melinda Haring is the editor of the UkraineAlert blog at the Atlantic Council and a fellow at the Foreign Policy Research Institute. She tweets @melindaharing.