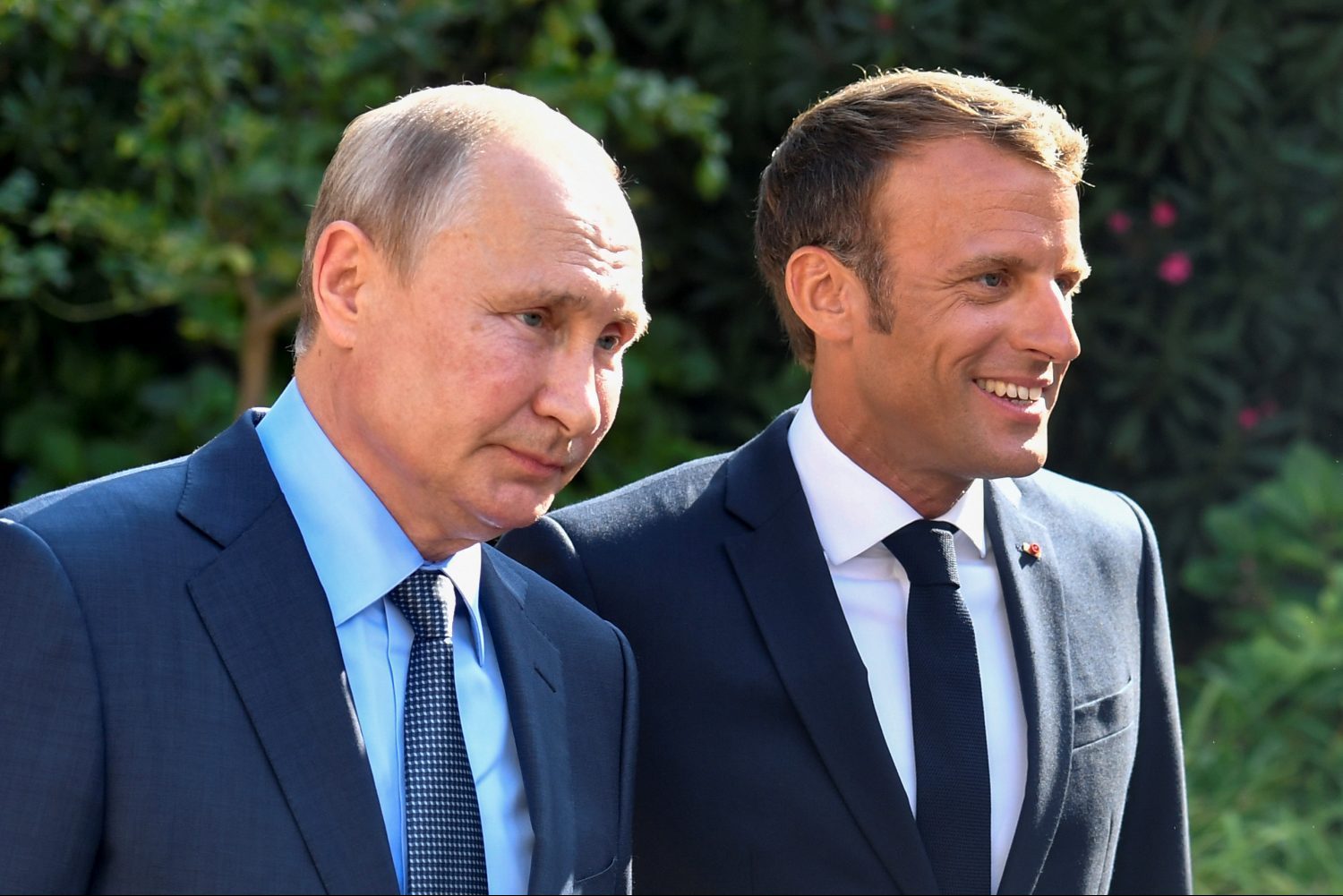 French President Emmanuel Macron welcomes Russia's President Vladimir Putin, at his summer retreat of the Bregancon fortress on the Mediterranean coast, near the village of Bormes-les-Mimosas, southern France, on August 19, 2019. Gerard Julien/Pool via REUTERS

Earlier this week, on September 2, France, Germany, Ukraine, and Russia met in Berlin to begin planning a summit to resolve the conflict in eastern Ukraine. By all accounts, the meeting was inconclusive, and no date was set for a summit but it’s really a matter of when not if.  The four countries involved in the so-called Minsk II process, France, Germany, Ukraine, and Russia, have publicly expressed interest in convening a summit.

In June, Ukrainian President Volodymyr Zelenskyy called for such a meeting to be held “soon.” French President Emmanuel Macron raised the idea with President Vladimir Putin just before last month’s G7 summit. A few days later, German Chancellor Angela Merkel stressed the wish of Paris and Berlin to hold such a meeting “as soon as possible.” In August, the Kremlin confirmed that all parties support the idea of a new summit.

Although every Ukrainian understandably wishes a quick end to the war in the Donbas and a lasting settlement of the conflict, Ukraine is strongly advised to approach any Minsk Summit with the greatest care.

First, the leaders of Germany and France are largely responsible for creating the muddle that the so-called Minsk II Protocol of February 12, 2015, represents. It resulted from the new peace plan that German Chancellor Angela Merkel and then French President François Hollande had presented a week earlier. During the ensuing negotiations with President Putin and then Ukrainian President Petro Poroshenko, the latter came under impossible pressure. The final documents is a confusing and incoherent mishmash of vague undertakings by Russia and commitments forced upon Ukraine without any timetable or logical order of which steps must be taken when.

Then there is the fact that Merkel, who in 2015 was still able to take quite a strong stand toward Putin, is seriously weakened at home. Her self-declared retirement from German politics makes her a lame-duck chancellor. Moreover, her government is a coalition with the Social Democrats, who increasingly call for better relations with Russia and show a willingness to loosen sanctions. The strong showing of the right-wing nationalist Alternative for Germany (AfD) in the country’s recent regional elections does not make it any easier for her to stand up to Putin.

It is also important to recall the still unbelievable German-Franco initiative in June for Russia’s unconditional return to the Parliamentary Assembly of the Council of Europe. In 2014, Russia lost its voting rights after annexing Crimea and launching an undeclared war in the Donbas. The most shameful part of PACE’s capitulation to Russian threats was its acceptance of Russia’s demand to weaken the Assembly’s sanction-power on members to such an extent to make it virtually nonexistent.

Another reason for great prudence is the personality and modus operandi of Macron. There are serious grounds to criticize his invitation to Putin just before last month’s G7 summit meeting in Biarritz. It gave the Russian president a wonderful opportunity to prove to Russians back home how friendly he is received in the West, without having to give anything in return. It also reopened the debate about Russia’s possible return to the G7, which President Trump gladly took as an opportunity to loudly welcome the Russian President back to the Group. (Fortunately, the rest of the G7 holds firm against Russia’s readmission.)

Macron now feels emboldened by the success of his G7 meeting and believes he is an effective player on the world stage. He certainly will want to make the Normandy Four summit that will be held in Paris a success as well. With a weakened Angela Merkel and a Vladimir Putin who will not be under real pressure to yield anything, the inexperienced Ukrainian president is likely to come under pressure from his Western partners.

They will insist that he “be reasonable” and “show good faith” by accepting conditions that represent “tangible progress,” but that will mean a weakening of the Ukrainian position.

Of course it can never be excluded that Zelenskyy will surprise everybody by speaking in his usual fresh and open manner void of diplomatic niceties and pull a rabbit out of his hat. It is difficult to see, however, how he could do this without strictly maintaining a red line regarding the Minsk II provisions that are of such crucial importance for Ukraine: the restoration of Ukrainian control of the state border in the whole conflict zone, the withdrawal of all foreign armed formations, military equipment, and mercenaries from the territory of Ukraine, and the disarmament of all illegal groups.

With the German, French, and Russian odds not in his favor, however, and the way in which he appears to be handling the prisoner’s exchange with Russia so far, there really seem to be serious grounds for the greatest caution.

Willem Aldershoff, former head of unit in the European Commission, is an international affairs analyst in Brussels.