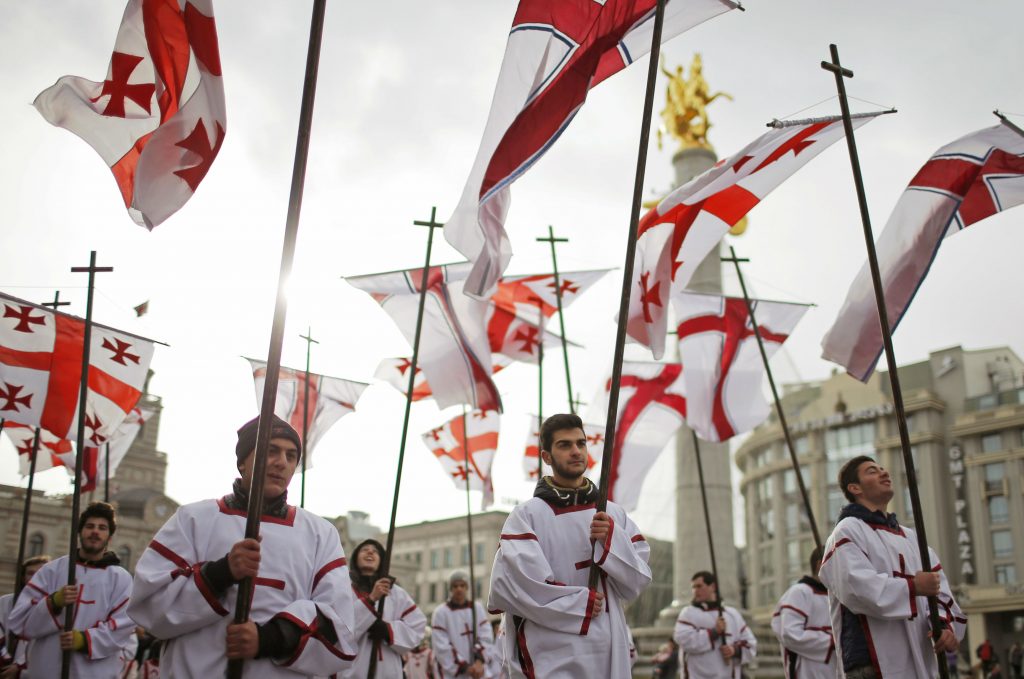 Participants march on the street during "Alilo", a religious procession, to celebrate the Orthodox Christmas in Tbilisi, January 7, 2015. Georgians celebrate Christmas on January 7, according to the Julian calendar used by the country's Orthodox church. REUTERS/David Mdzinarishvili

After 1991, Georgia and Ukraine, along with other Eastern European countries, bonded over efforts to reform their economies and governments. In 1997, Georgia, Ukraine, Azerbaijan, and Moldova created between themselves a multilateral consultative forum that later became the Organization for Democracy and Economic Development, better known under the acronym GUAM. With the 2003 Rose Revolution and 2004 Orange Revolution, Georgia and Ukraine respectively left their “post-Soviet” trajectories and took resolutely pro-Western paths.

In summer 2008 during the Russian-Georgian war, then-President Viktor Yushchenko traveled to Tbilisi to demonstrate Ukraine’s support for Georgia. And starting in spring 2014, Georgians returned the favor, helping Ukrainians in a myriad of ways during their violent confrontation with Russia. A number of Georgian politicians have taken high-level positions in various Ukrainian state offices. People-to-people contacts are also getting stronger; since March 1, citizens’ trips between the two countries have become exceptionally simple; they only need to present national ID cards.

Clouds on the Horizon

Georgia and Ukraine’s recent common history and challenges have largely created a broad and firm basis for a special relationship between the two countries. However, recent religious affairs are raising the question of how far Georgia’s political support can go and whether it will be strong enough to overcome Russian pressure. Such doubts have arisen as a result of the Georgian government’s failure, so far, to officially welcome and support the Orthodox Church of Ukraine in its autocephaly, which occurred in January 2019.

The main reason for Georgian officials’ silence on this issue lies within the Georgian Orthodox Church; the institution is not rushing to take an official position on Ukraine’s newly united Orthodox Church. The last 2018 meeting of Georgia’s Holy Synod on December 27 postponed the church’s official verdict on the issue. “The Church of Georgia will make a decision relating to Ukraine at the next Holy Synod meeting, as it was promised,” announced Michael Botkoveli, secretary of the Patriarch of Georgia.

The January 2019 visit of a high representative of the Constantinople Patriarchate to Tbilisi again raised the question; the meeting between the Ecumenical Patriarch’s emissary and the Georgian church’s leaders did not lead to any clear announcements. Metropolitan Emanuel merely stated that the “Catholicos-Patriarch of Georgia has the wisdom to make the proper decision.”

It is not surprising that Georgia’s Orthodox Church is dragging its feet; within the church’s Synod, opinions on the issue differ widely. Some Georgian Orthodox hierarchs openly support Ukrainian autocephaly. “The Ukrainian nation of forty million people deserves its independence,” said Metropolitan Peter Tsaava of Chkondidi in late December 2018.

But Bishop Iakob declared in late January 2019 that “we should not get involved in religious war, we should not think about only Ukraine, but also about Abkhazia. I’m thinking about my country first.” Iakob and likeminded Georgian bishops believe that Georgia should behave cautiously: they argue that if Georgia’s church recognizes Ukrainian autocephaly, the Moscow Patriarchate of the Russian Orthodox Church could in response recognize the independence of the Abkhaz Orthodox Church and thus help its separation from the larger Georgian institution.

When Ukraine’s autocephaly became a publicly-discussed issue in Georgia, some members of the Georgian Orthodox Church addressed the Holy Synod with a petition in support of autocephaly for Ukraine’s united Orthodox Church. Some even gathered in front of the Georgian Patriarchate’s building in January 2019 to protest the church’s timid position; they held placards stating, “Our support to the Ukrainian nation.” In contrast, Georgian government representatives have abstained from publicly commenting on the issue, noting that it is of concern to the Tbilisi Patriarchate. “I would like to state clearly that the Georgian Orthodox Church is reviewing this question. Considering the canonical processes, the position regarding this issue should first be determined by the Orthodox Church of Georgia. As for the state, it does not interfere with the church’s affairs,” said Minister of Foreign Affairs David Zalkaliani.

In response to Hilarion’s open warnings toward Georgia, the Georgian Patriarchate explained that the Georgian Church has always tried to take positions not on political grounds but on the basis of ecclesiastical law. “At a time when, in the Tskhinvali [South Ossetia] region on a Russian military base the construction of a church is ongoing without any negotiation with us, and in Abkhazia the clerics [under] the Russian Church conduct non-canonic liturgies, the ambiguity of his statement sounds threatening,” the Georgian Patriarchate complained in early February. “We are guided by principle in the current situation, in that capacity, we take care of Orthodox unity; to ease tensions, we believe, is the responsibility of all churches,” reads the webpage of the Georgian Patriarchate.

An official representative of the Georgian Patriarchate, Metropolitan Shio Mujiri, has rejected accusations that the Georgian Patriarchate is under the influence of the Russian Orthodox Church. Still, some believe that many hierarchs of the Georgian Orthodox Church are behaving this way not only because of the Abkhazian issue, but also because they are pro-Russian. The theologian Giorgi Tiginashvili claimed in early January 2019 that “the majority of the Holy Synod of Georgia is Russophile. They are linked to Russia via private contacts, previous educational and living experience, etc.”

Should such a stance prevail, the effects of a possible divide will have a political and even geopolitical dimension, as well as repercussions for Ukrainian-Georgian relations. Most Georgians see their own national church as a—or even the—prime symbol of what it means to be Georgian. Similarly, most Ukrainians regard an autocephalic church as a critical expression of the uniqueness and independence of their nation.

Whatever the exact outcome, such a schism, like so other critical issues in this part of the world, could be laid squarely at Russia’s feet. The unity of Russian and Ukrainian Orthodoxy might have been possible to preserve, had the Moscow Patriarchate’s hierarchs taken a clear, official, and critical approach toward Russia’s covert military invasion into Ukraine since 2014. Yet neither Metropolitan Kirill nor any other high representative of the Russian Orthodox Church appear to have done or said anything to effectively condemn or substantively moderate the Kremlin’s aggressiveness. The origins of Eastern Orthodoxy’s current schism lie thus neither in Kyiv nor in Constantinople, but in Moscow. It would be unfortunate if Russia’s war against Ukraine and the subsequent deep split in eastern Slavic Christianity will also spoil the otherwise very close relations between Ukraine and Georgia.

Editor’s Note: This article is an outcome of a project within the 2018-2019 Democracy Study Center training program of the German-Polish-Ukrainian Society and European Ukrainian Youth Policy Center, supported by the Federal Foreign Office of Germany.