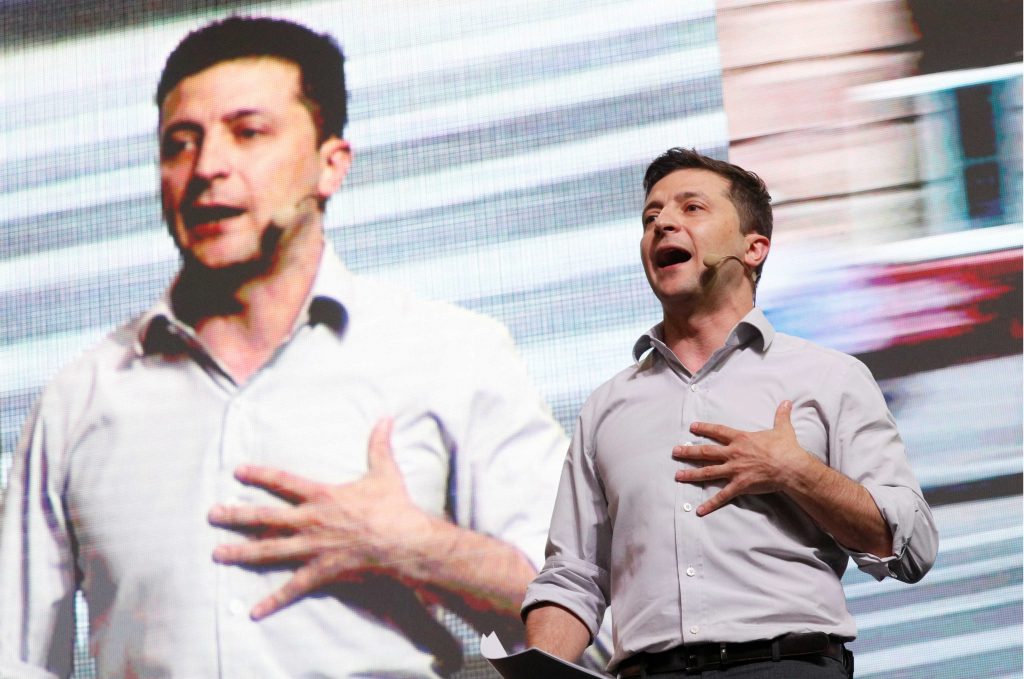 Ukraine's President Volodymyr Zelenskiy delivers a speech during an IT conference in Kyiv, Ukraine May 23, 2019. REUTERS/Valentyn Ogirenko

On May 20, Volodymyr Zelenskiy was inaugurated Ukraine’s seventh president. In his inaugural address, he demonstrated a resoluteness that should put an end to the annoying journalistic cliché of a “comedian-president.” Taking such firm actions as dissolving parliament and requesting the resignations of key officials within minutes of taking office in front of the very same people, he demonstrated a full understanding of Theodore Roosevelt’s favorite weapon, the bully pulpit.

Transferring his communication skills to governance is surely a good thing in general, but may be particularly important on the issue of gas prices. Many voters probably hope that Zelenskiy is such a good guy that he will reward them by going back to the old days of cheap gas. Here is an opportunity to move early and explain to people why seemingly cheap gas is in fact much too costly for the country and its citizens.

The new president should start with a simple story of the enormous damage cheap gas—purchased from Russia, of course—did in the past. The alleged benefits of cheap gas for twenty-five years since independence were entirely illusory, as they had many negative consequences. Direct impacts included long periods of unpredictable cut-offs by Russia; cold apartments resulting in casualties and health problems for residents, especially the elderly; and an uncertainty of energy supplies for factories and other industry that caused production losses.

Even greater were the many indirect costs. When private intermediary companies were allowed by the government to make deals to buy gas from Gazprom in the future and then sell it to Ukrainian energy distributors for a profit, Russia insisted on loan guarantees by the Ukrainian government. When somehow these intermediaries went bankrupt and could not pay, the budget did, which automatically meant less funds for schools, hospitals, road repairs, and many other necessary services—that is, for many government programs that might have benefitted the same people getting “cheap” gas.

And that’s not the end of it. Russia often insisted that the sale of gas to Ukraine—incidentally at prices far below those that Poland and other Central European countries were paying from the start of their freedom from Moscow—involve not only government guarantees but also lower payments by Gazprom for transit through Ukraine’s Druzhba pipeline to Europe, as well as frequent “kind” offers to accept debt payment in the form of ownership of refineries and other energy facilities.

The biggest cost was not easy to measure but is well understood: the most important method for embryonic oligarchs of the nineties to accumulate huge sums of money was to play the game of energy intermediation: profits went to them, while debts were paid by the budget—that is, by the people. Experts have estimated the total amount of these gas-related debts to be in the tens of billions.

That was then; have things changed? Aren’t we free of Russia’s blackmail? Yes, but only because Ukraine pays Gazprom more or less the same price as all of Europe—an accomplishment for which the previous government deserves credit. Technically, the government could legislate a lower price for households by providing a subsidy from the budget, but this only brings back the problem of reducing available funds from other social uses. It is far less costly to continue with high prices and direct income supplements to low-income households, with the added advantage that those with higher incomes are not given the free ride of cheap gas. Theoretically one might even negotiate a lower supply price with Gazprom, but this stretches credulity—and merely brings back the earlier costs of what Russia would demand for this.

Time is running out to kill Putin’s pet project

Russia’s disregard for European votes, laws, and court rulings against the pipeline should be reason enough to ban the project.

No doubt many citizens, and certainly populist demagogue politicians, will say, “First, do something to increase our incomes to Central European levels, and then raise gas prices.” After all, most Ukrainians are still feeling the reality of the country’s poor economic performance since independence compared to Poland and others.

But in Central Europe, high-priced gas came immediately after 1989, many years before incomes to afford this were achieved. Economic growth and improved standards came about thanks to all sorts of early reforms, including accepting the immediate reality that gas costs what it has to cost. While Ukraine’s early governments delayed needed reforms—allegedly to avoid imposing on people the great shocks of high prices, but perhaps in reality to buy themselves time to become new capitalists—Poland among others moved fast; people endured a shock for a few years, but soon came therapy and today prosperity. In contrast, Ukrainians endured shock and more shock for years and years, with little or no therapy, and today citizens have a standard of living ranked as one of the lowest in all of Europe.

As Taras Shevchenko wrote long ago: “Learn from the foreign, whilst shunning not thine own.” Like Poland and other countries, Ukraine must finally learn that the pain of high prices is often best not avoided.

Oleh Havrylyshyn is an adjunct research professor in the Institute of European, Russian, and Eurasian Studies at Carleton University in Canada.