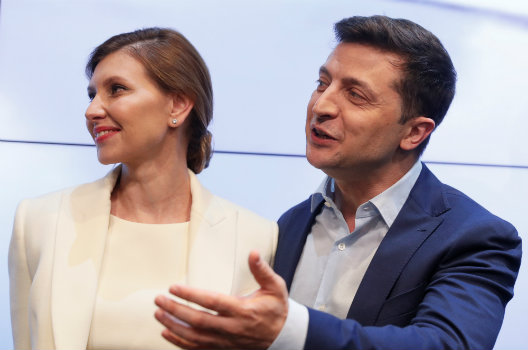 Ukrainian presidential candidate Volodymyr Zelenskiy and his wife Olena react following the announcement of the first exit poll in a presidential election at his campaign headquarters in Kiev, Ukraine April 21, 2019. REUTERS/Valentyn Ogirenko

I’m not sure whether I should offer congratulations or condolences on the major life change that you and your family have undergone since your husband won the presidency. That said, I have followed your interviews with the BBC and the Daily Beast with great interest.

You are impressively up-to-speed on the impossible situation that activists and journalists face in Ukraine. You mentioned the assassination of Pavel Sheremet and the terrible killing of Kateryna Handziuk in your interview with the Daily Beast. As you know, whoever killed Pavel got away with it, and those who ordered the fatal attack on Handziuk are likely to get off. Activists in Ukraine’s regions are especially vulnerable.

This is presumptive on my part, but I would like to ask you to do more than your predecessors. Your husband says he wants to make history. I take him at his word, but many people don’t, or they want him to fail. And you face low expectations. No one thinks you’ll go beyond banal speeches about children and education and appearances at schools and orphanages. Surprise us. Make the rights of journalists and activists your signature issue. Ukrainians like and respect you. Use your voice.

I have another delicate issue to discuss. Your husband doesn’t have any women in his inner circle. I’ve asked everyone in Kyiv, and they all tell me that you are his most important advisor. However, you aren’t in the photos with him and his team, and these visuals matter. Of course, Ukraine has its own culture and mentality, but please press him to appoint some women. You may dismiss women’s representation as a silly Western obsession, but research shows that organizations function better when at least one-third of the team is female. And please remind him to use respectful language when he talks about Ukrainian women. They are an incredible force, but they aren’t a brand and they don’t belong to anyone.

When you come to Washington, we will welcome you with open arms. I hope that you will wear Ukrainian designers and elevate Ukraine, but I sincerely hope that you will give me and my colleagues interviews. We want to get to know you and learn more about your vision for the future.

Congratulations again. I look forward to meeting you in Washington.